Haikou, also named “YeCheng(the City of Coconut)”, provincial capital of Hainan province, national “One Belt And One Road” strategic pivot city, China (hainan) pilot free trade zone (harbor) core city, is located in the north of Hainan island, is the political, economic, technological and cultural center of Hainan province and the largest transportation hub. It is adjacent to Wenchang in the east, Chengmai in the west, Anding in the south and Qiongzhou strait in the north. Haikou is located in the tropical zone, tropical resources show diversity, it is a southern coastal city rich in natural coastal scenery. It has a history of thousand years since the northern song dynasty. Haikou city was founded on December 9, 1926 and liberated on April 23, 1950. On April 13, 1988, Hainan province was established and Haikou became the capital of Hainan province.

Other Destinations in Haikou

Haikou, the capital of Hainan province, was once selected as a charming city with Chinese characteristics. It is not as famous as Sanya, and for this reason, it is also not as noisy as Sanya. However, the romantic feelings of island are still the same. Haikou is featured by beautiful scenery and numerous scenic spots and historical sites. Tourist attractions in Haikou are relatively concentrated. There are many attractions including Temple of the Five Lords(五公祠) which is known as "The [...]

Haikou not only has the tropical amorous feelings outlined by the blue sea, blue sky, coconut trees and sunshine, but also has the romantic colors exuded from Li and Miao compatriots and traditional cuisine. If you want to take a train to Sanya or take a train to enjoy the coastal scenery of Hainan island, Haikou is a great place to start. Haikou tours are always connected with Sanya, the most popular tourist cities in Hainan Province. Haikou boasts both beautiful scenery and numerous scenic spots [...] 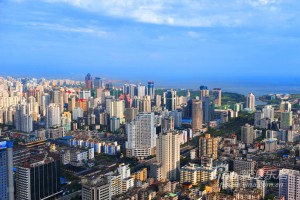 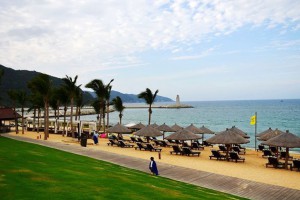 Haikou city is located in the northern margin of the low-latitude tropics, belonging to the tropical monsoon climate. Haikou has no severe cold in the winter, remaining green throughout the year, warm and comfortable.  Weather Graphs Note: The graphs are for reference only.  Features of Haikou Climate Haikou has a long annual sunshine duration and large radiation energy. The average [...]

More Haikou Climate & When to Go >>

In the long history of Chinese civilization, Hainan island has a long history and unique culture. The migration of population, the integration of ethnic groups and the integration of languages make it a unique multi-culture. Today, there are many festivals and celebrations in Haikou, still remained and celebrated.  Coconut Festival(椰子节) Date: In the late March or early April Hainan island is also known as "coconut island", coconut trees are the symbol of Hainan. Every year, Hainan international coconut festival is held in Haikou, [...]

Haikou city is located in the north of Hainan island, close to Qiongzhou strait in the north, and faces Hai'an town of Guangdong province at a distance of 18 nautical miles. It is adjacent to Wenchang in the east, Chengmai in the west and Anding in the south. The total area of the city is 3145.93 square kilometers, of which the land area is 2,284.49 square kilometers, the sea area is 861.44 square kilometers, and the coastline is 136.23 kilometers. To help you have a [...]

Haikou is not as famous as Sanya, but for this reason, it is also not as noisy as Sanya. As the political, economic, scientific, technological and cultural center and the largest transportation hub of Hainan province, Haikou enjoys sound economic development and relatively complete infrastructure. So tourists to Haikou don't need to worry about accommodation, and the accommodation condition there is not bad. Here below are some starred hotels in Haikou.  Recommended Hotels in Haikou 5-star Hotels in Haikou Tianyou Grand Hotel(天佑大酒店) Address: No.239, Binhai Avenue, [...]