The Ruins of Ancienty City of Jiaohe (Yarkhoto) in Turpan 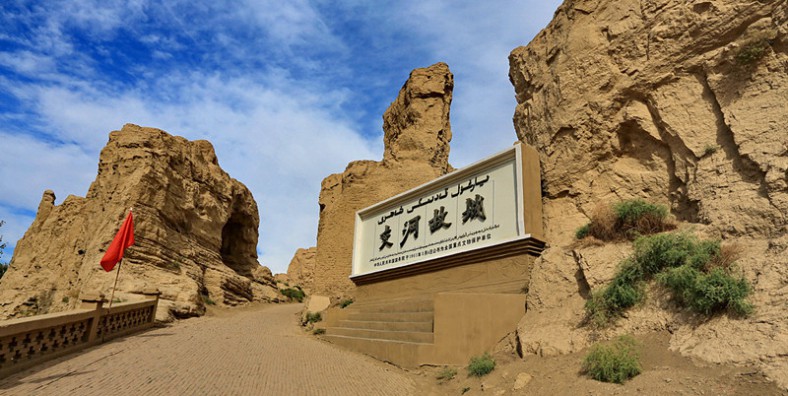 One of the world's architectural wonders hides in Yarnaz Valley, 10 kilometers (6.2 miles) west of Turpan.

Why is The Ruins of Ancienty City of Jiaohe So Special?

As a city consisting of earth constructions, it is seldom seen in the world both in ots size and good preservation situation. Now it is a major cultural site under state protection.

Where is The Ruins of Ancienty City of Jiaohe

The Jiaohe Ruins(吐鲁番市交河故城) is located on a mesa in willow leaf shape between the Yarnaz River valleys 10 kilometers to the west of Turfan City . Being circled by rivers flowing by, it has the name “Jiaohe”(the city of joining river).

History of The Ruins of Ancienty City of Jiaohe

The ancient city of Jiaohe was founded and built by car engineers from the 2nd century to the 5th century BC. It reached its peak in the Southern and Northern Dynasties and the Tang Dynasty. Due to its strategic position and years of war, Jiaohe gradually declined from the 9th to the 14th century. During the Chagatai period at the end of the Yuan Dynasty, years of fighting took place in Turpan. Jiaohe City was badly damaged and finally abandoned.

In the 14th century, after years of brutal wars, Mongolian aristocrats such as Haidu and other rebels successively defeated Gaochang and Jiaohe. At the same time, Mongolian rulers also forced local residents to give up their traditional Buddhist beliefs and convert to Islam. Under the double blow of spirit and material, Jiaohe has finally completed its life course.

Brief Introduction of The Ruins of Ancienty City of Jiaohe

The mesa the city occupies has a long and narrow topography, running from northwest to southeast, 1760 meters long and 300 meters across at the widest part. The city includes city gates, streets and lanes, government office, temples, domestic houses, cave houses, wells, and an underground temple. The ancient city of Jiaohe is a famous historical and cultural city built with local conditions by ancient nationalities of Cheshi,Han, Uighur,etc.

Main Attraction of The Ruins of Ancienty City of Jiaohe

The ancient city was the capital of the former Cheshi State. An Indian proverb says, ‘Intelligence is bound to exist where two rivers meet’. Jiaohe, meaning in Chinese where two rivers meet, is such a place. According to historical records it was home to 700 households, 6500 residents plus 865 soldiers.

Jiaohe distinguishes itself from other ancient cities owing to three features. First, it had only two city gates, the South and East Gates. The main South Gate vanished long ago, leaving a huge breach. The East Gate cut by the cliff was virtually non-existent. Second, the city faces cliffs on three sides, so there are no city walls commonly seen in other ancient cities. Third, all the buildings were dug from earth, and wood was rarely used.

To the west of the avenue, low buildings with sparse small temples were residences for commoners, while the high ones in the east were for aristocrats and troops. At the end of the avenue stands a large well-preserved Buddhist temple, Jiaohe Temple, with an area of 5,000 square meters (53,824 square feet).

Best Time to Travel The Ruins of Ancienty City of Jiaohe