In order to offer our customers better convenience in their visiting in Turpan, here we provide some further information about Turpan transportation.

Turpan Jiaohe Airport
It is located in the northwest suburb of turpan city, about 10 kilometers away from the urban area of Turpan. It stands between the city proper, Daheyan Town and Qiquanhu Town, about 180 miles away from downtown. It takes you about 20 minutes’ flight to reach Urumqi from the airport.

Tulufanbei Railway Station
The railway station is located in northwest of Turpan city and it is 15 miles far from the downtown. It is in the south of Turpan Jiaohe Airport, and the distance between them is about 500 hundred meters. You could take trains to Kumul and Urumqi from here, and cities in other places out of Xinjiang, such as Lanzhou, Beijing, Xining, Chongqing, Shenzhen, Jinan, Shanghai, Guangzhou, etc.

The main coach station of Turpan is Turpan Prefectural Passenger Transport Center and Jiaohexi Coach Station. Turpan Prefectural Passenger Transport Center is situated on No.545 Chunshu Road, and if you have questions about your ticket service, you could call at 0995-8522325. And Jiaohexi Coach Station is located on Lvzhoubei Road of Turpan city.

The price is 5 yuan each person in the city, but if you go to the places out of city, you need to ask the price first. It is about 300 to 400 yuan a day for chartered taxi.
Business Time: 24 hours.

If you prefer slow touring of the scenery on the way or go to somewhere close, you could choose the donkey cart.

How to Get to Turpan from Urumqi

Urumqi to Turpan Transportation Guide serves you detailed transport information about How to Get to Turpan from Urumqi and introduces high speed trains, trains, Roads, Cycling, bus, Cars, taxis... 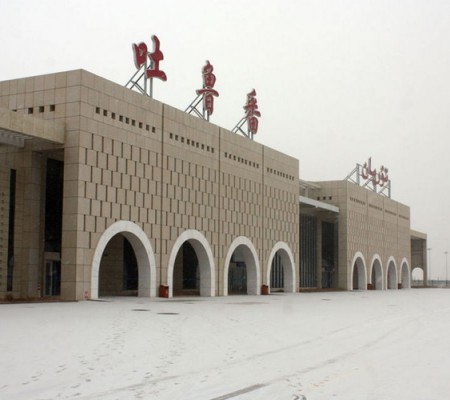 Turpan Jiaohe Airport (Chinese: 吐鲁番交河机场) (IATA: TLQ, ICAO: ZWTP) is an airport serving the city of Turpan in XinjiangUyghur Autonomous Region, China. It is located 10 kilometers northwest of the city, and named after the Jiaohe Ruins. First built...