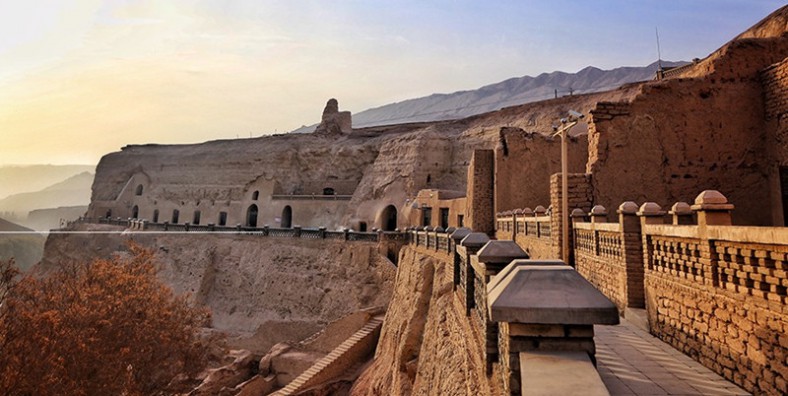 With over 40 murals and a total area of 1,200 square meters, the Baizi Crick Thousand Buddha Cave is the largest cave group in Turpan's existing grottoes with the most murals and is one of the largest Buddhist cave temple sites in Xinjiang.

Why is The Bezeklik Caves So Special?

There are 83 numbered caves; among them 40 preserved murals totaling 1200 square meters. These caves are first excavated in Qu`s Gaochang period. The exising caves were reconstructed or newly extended by Uighurian people. In some caves one can find that Buddhish murals are painted on Manichean murals. Themes of the murals are mainly the stories about causes. On front walls flanking the door of the cave are generally painted Uighurian donors and written Chinese and Uighurian inscriptions. The Bezeklik Caves now is a major cultural site under state protection.

Where is The Bezeklik Caves

Bezeklik Thousand-Buddha Cave (吐鲁番市柏孜克里克千佛洞) is located 50 kilometers to the east of Turfan City . “Bezeklik”means “a place with beautiful decoration”.

History of The Bezeklik Caves

Baizi Creek Thousand Buddha Cave is located 45 kilometers east of Turpan City on the cliff on the west bank of Mugou. There are 83 caves and 57 existing ones. Among them, there are more than 40 murals with a total area of 1200 square meters. It is the grotto group with the largest number of existing grottoes in Turpan and the richest murals. It is one of the largest Buddhist grotto temple sites in Xinjiang.

The Baizi Creek Thousand Buddha Cave has experienced the process of formation, prosperity and decline. Cave 17 and Cave 18 were excavated in the late period of the Southern and Northern Dynasties in the 617th century A.D. Cave 16 was carved in the Middle Tang Dynasty.

Murals in Cave 20 are painted with images of the Uighur King Gaochang and Queen. On the back wall of Cave 33, there is a picture showing the intention of all disciples to mourn silently after Buddha’s nirvana. Cave 38 is a cave that reflects the life of ancient Manichaeism. Cave 51 was built in Gaochang period of Huihe. Cave 69 is one of the caves in Cave 20. Grottoes 82 and 83 were small memorial grottoes specially built for Buddhist monks during the strong period of the Gaochang Uighur kingdom from the 10th to the 11th century a.d.

Brief Introduction of The Bezeklik Caves

The Baizi Crick Thousand Buddha Cave, which began to be excavated in the late Northern and Southern Dynasties, has experienced a long period of seven centuries in Tang, Five Dynasties, Song and Yuan Dynasties. It has always been the Buddhist center in Gaochang area. Gaochang of Huihe is the most prosperous period of grottoes. At the end of the 13th century AD, the Gaochang royal family moved eastward to Yongchang, Gansu Province. In addition, after Islam was introduced into Turpan, Buddhism gradually declined and the Baizi Crick Thousand Buddha Cave declined.

At the beginning of this century, Russia, Germany, Britain, Japan and other powers repeatedly robbed and destroyed the murals. All the eyes of the murals were cut off. The Baizi Creek Thousand Buddha Cave was even worse and beyond recognition. Although it has been seriously damaged, the remaining Buddhist temples are gorgeous and exquisite, and the remaining murals are rich in content and bright in color. The Baizi Crick Thousand Buddha Cave is still a large-scale cultural and artistic treasure house, which was announced by the State Council as a national key cultural relic protection unit in 1982.

Main Attraction of The Bezeklik Caves

Bezeklik Caves was the royal temple of Huihu (the predecessor of today’s Uigur) State and the present remains were enlarged or renovated during that time. The murals take us back to the ancient Huihu State, where we can see the King and Queen and people from all walks of life. The inscriptions, written in ancient Uigar, Chinese and other languages, provide authentic reference for valuable historic research.

The most exceptionally rare mural topics in Bezeklik Caves are found in Caves No.16 and 17. Cave No.16 depicts a musician playing Xiao Hu Lei– a lute-like instrument originating from southern China’s Yunnan province. This strengthens the belief that cultural exchange between northern and southern China was unprecedented during Tang Dynasty.

The mural Transformation in Hell in Cave No.17 supports the notion Huihu Gaochang was the center of Manicheism from 9 to 12 century.

In addition to the murals and inscriptions, a piece of gold foil wrapping paper found at the site is also intriguing. A stamp on it revealed the address of the shop on the south side of Tiahelou Street, Hangzhou, Zhejiang of Song Dynasty. It also advised clients to examine their goods carefully before purchase to avoid being cheated. As an apparent piece of advertisement, the foil shows that Gaochang Huihu kept close economic ties with Song Dynasty as the trade extended as far as to the East China Sea.

The best time to come to Sand Therapy Center is every autumn, that is, August and September.

At this time, the weather began to cool and the fruits began to mature. This is a very suitable time to travel. At this time, most scenic spots began to hang attractive gold. Let’s travel in the golden ocean. The natural scenery around Sand Therapy Center is very beautiful. In our spare time, we take our family to play in Sand Therapy Center, eat delicious fruits and enjoy different local conditions and customs. I believe this is a very beautiful moment and a very happy memory.