Yusuf Has Hajip Mazar in Kashgar 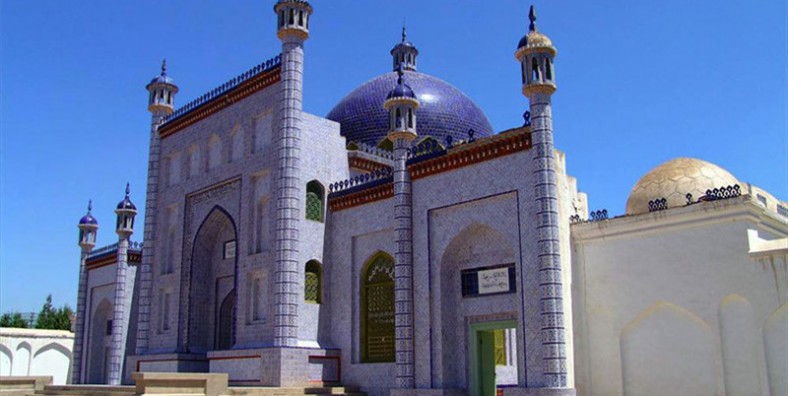 It is the first batch of key cultural relic protection units in Xinjiang Uygur Autonomous Region. The whole cemetery is unique and magnificent in layout, simple and solemn in decoration, and has strong ethnic characteristics.

Why is Yusuf Has Hajip Mazar So Special?

The tomb was originally situated near the Tuman River. But in Yarkand Khanate period, it was moved to the present site. In 1988, the tomb was rebuilt again. On the eastern part of the Mazar is a domed tomb hall covered with green glazed tiles. On the west stands a flat-roofed prayer hall, of which the wooden pillars are beautifully carved with flowers. All the structures are of traditional Uygur artistic style. Now the Mazar is a major cultural site under state protection.

Where is Yusuf Has Hajip Mazar

Yusuf Has Hajip Mazar was born in 1019 and died around 1080. He is a famous Uighur poet, scholar and thinker in the 11th century.

As a young man, he studied at the Karahan royal institution of higher learning in the eastern capital Kashgar. around 1070 a.d., he wrote a long narrative poem “happiness wisdom” in ancient Uighur, which had more than 13,000 lines. This long poem is rich in content, vivid in language, full of ethics and morality, and involves politics, history, geography, mathematics and medicine at that time. It is a large-scale document with a definite writing age. It has exerted great influence on the literary creation of later generations and is regarded as a treasure by historians at home and abroad.

He received a good education when he was young and became a knowledgeable scholar. The language of his works is fresh, vivid and vivid. Its contents involve political, economic, military, legal and other major social issues. It not only occupies an important position in the history of Turkic ethnic literature, but also is an important historical material for studying Karahan Dynasty.

The tomb of yusuf khass hajib covers an area of 1,900 square meters, including five parts: cemetery, mosque, memorial tower, exhibition room and reception room. The cemetery covers an area of 825 square meters and is equipped with wing rooms, basement and vault. The wing rooms consist of 22 arched open-door rooms, which encircle the east, north and south sides of the tomb and are 9 meters away from the tomb.  To the west there are two gates with gatehouses and four minarets.  Four minarets up to 9.4 meters are also built at the four corners of the wing.  The tomb is divided into an outer chamber and an inner chamber, 17.58 meters wide from east to west and 11 meters long from north to south.  The tomb faces west and has a gate with two minarets up to 16.4 meters.  The outer room has three floors. On the first floor, there are circular steps and cabins leading to the basement and going up to the top of the door and around the tomb.  The inner chamber is built with a circular vault 19.6 meters high and 9 meters in diameter, with glass windows on all sides.

The mausoleum faces south and is rectangular in shape. The main entrance is 4 wide. Two meters tall and eight meters tall, there is one on both sides of the main entrance. The 7-meter He Zhu tower, mausoleum, tomb group, gate house and main tomb are composed. The main tomb has a round outside and a dome top. In the middle of the top is a small tower. The mausoleum is unique in layout, magnificent, simple and solemn, and has a strong national style.

The mausoleum is paved with colored glazed bricks.  There is also a 198.85 square meter basement inside the tomb, which plays a moisture-proof role in the tomb.  The whole cemetery has a unique and magnificent layout, simple and solemn decoration, and has strong national characteristics.