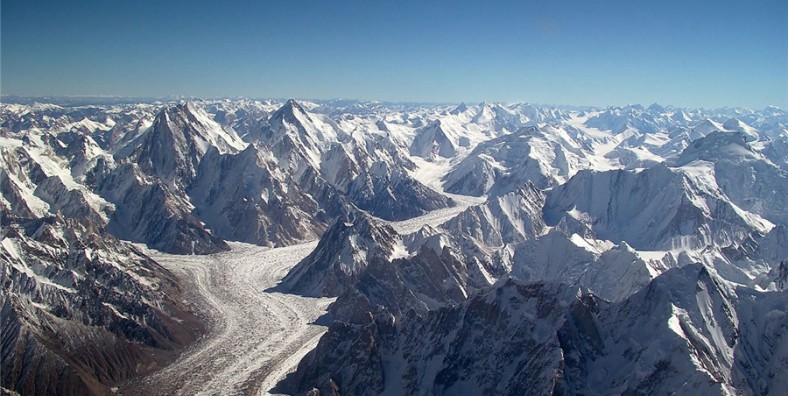 The Karakoram Range stands in the northwest of Qinghai-Tibet Plateau, Karakoram Range is conjunct with the Pamirs, the Himalayas and Mount Tanggula. The major part is on the border between Xinjiang Uygur Autonomous Region and Kashmir and stretches eastwards to Tibet.

The Karakoram Range is about 240 kilometers, the length of 800 km. The altitude is with an average of more than 5500 meters above sea level. It is the world’s longest mountain and high latitudes to the largest concentration of glaciers. The border of Tajikistan, China and India, Pakistan and Afghanistan are crossed in these mountains in the entire world, giving this remote area of the huge geopolitical significance. Thin air, strong solar radiation, strong winds and temperature differences, is a unique climate characteristic in the region.

Karakoram, a total of 19 mountains of which are more than 7260 meters, eight peaks over 7500 meters, 4 of which are more than 8000 meters. The mountains are steep with a sharp-pointed shape, and there are many Snow Mountains and huge glaciers. It is surrounding by several hundreds of pinnacles and peaks. Terrain is characterized by lofty mountains and steep hills. South slope is long and steep; North Slope is steep but short. Precipice and fall stone occupied the vast area.

How to get to Karakoram Mountain Ranges

If you want to get out of the traffic and hassle of navigation, you can book a private tour package that includes visiting, dining and transfer from us. Our local guide and driver will escort you to the Karakoram Mountain Ranges and most convenient way and take care of all the details. You just have to focus on the visiting.

You can fly to Lhasa and then transfer to Mt. Kailash. And then Taking direct flights to Ali Kunsha Airport.

The Best Season for Climbing

The best way to prevent Tibet mountain sickness is to avoid ascending to high elevation rapidly. You’d better ascend slowly, drink enough waters and eat light. If Tibet Mountain Sickness happens to you, try to calm down and descend to lower places as soon as possible. It’s also suggested to check with your family doctor and take some Hongjingtian before Tibet travel.

The mountain’s climate is largely driven by a half dry wind and continental climate. Southern slope due to the influence from the Indian Ocean monsoon and become humid, but it is extremely dry in the North Slope. At the bottom of the hill and central hill, there is less rain and snow; the average annual rainfall is less than 100 mm. At an altitude of more than 4877 meters, the rain is drop in a solid form, however, even if the height is lower on June, snow are common. In the warmest month, at an altitude of about 5700 meters, the average temperature is lower than 0 ℃; between 3900 ~ 5700 meters above sea level, the temperature is below 10 ℃.