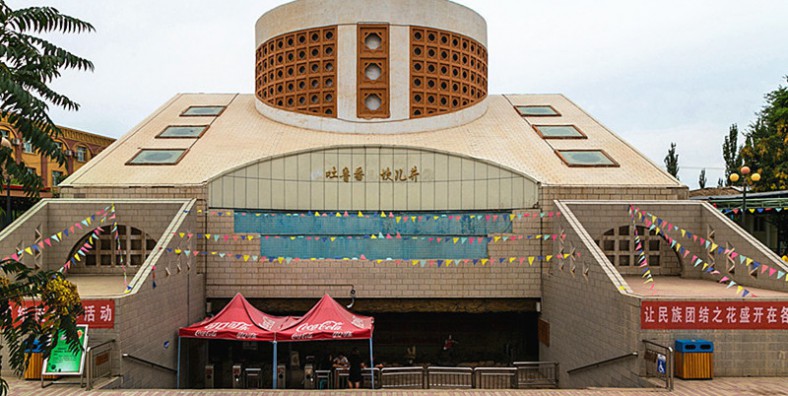 Karez is an ancient horizontal water collection structure for the development and utilization of groundwater. It is suitable for foothills and alluvial fan margins. It is mainly used to intercept underground diving for farmland irrigation and residential water use.

Why is Karez Water System So Special?

Karez systems are the crystallization of ancient people’s diligence and intelligence. At its peak, this irrigation system exceeded 5,000 km (3,106 miles) and was also referred to as ‘the underground Great Wall’. It is among the three ancient major irrigation projects with the other two being Ling Canal and Dujiangyan Irrigation Project.

One of the major achievements of Han Dynasty, especially Emperor Wu of Han Dynasty, was the development of the vast northwest region. At that time, the immigration border and the construction of canals and wasteland were taken as part of the fight against Xiongnu invasion. At this time, the northwest region became the key water conservancy area second only to Guanzhong, and the water conservancy engineering technology was greatly improved. Karez, a special type of water conservancy project in Xinjiang, was also founded in the Western Han Dynasty. According to “Han Shu, Biography of the Western Regions”, during the reign of Emperor Xuandi, the Han Dynasty sent the Qiang General Xin Wuxian to Dunhuang with 15,000 troops. The emissaries, according to the schedule, crossed the western side of Beidi Houjing and wanted to pass through the canal and turn to the valley. Meng Kang, a member of the Three Kingdoms, noted that Dajing No.6 and Tongqu also gushed out from the lower part of the river, which was under the Dongtu Mountain in Bailongdui. This project has six vertical shafts, which are used to channel water. It is obviously a modern karez. Karez is a unique type of irrigation water intake project in Xinjiang.

In some alluvial fan terrain areas in Xinjiang, the soil is mostly gravel and has strong water permeability. After the snow water on the mountain melts, most of it seeps into the ground, and the underground water is also deeply buried. In order to draw out the water seeping into the ground for irrigation in plain areas, it is more convenient to excavate wells and canals. Well canal technology has been applied in the construction of Longshou canal. Xinjiang’s working people have attracted the construction experience of well canal method and introduced it to new geographical conditions to create a new type of irrigation project.

Karez also functions as the natural air conditioner for the locals because they can sit in one while chatting or doing some chores. When exhausted during the scorching weather, sit in a karez, pick some grapes as they hang over the vertical wells and savour their taste, you will be thoroughly refreshed!

Karez are very delicate irrigation systems made up of vertical wells, underground canals, above-ground canals and small reservoirs. Generally, a karez is 3 km (1.9 miles) with the longest being 20 to 30 km (12-19 miles) with several dozen vertical wells. Sometimes the number of vertical wells exceeds 300. Until today, the shortest karez found is only 30 meters (98 feet) long. The vertical wells are for ventilation, digging and maintenance of the karez. The bottoms of all the vertical wells are connected so that water can pass through. The underground canal is about 2 meters (6.5 feet) high and covered with earth to resist the heat. The surface canals, connected to the underground ones, are not more than 1 meter (3.2 feet) wide with trees planted on both sides to prevent evaporation.

A karez reduces evaporation, avoids getting polluted and needs no other power equipment; it runs from high to low ground owing to gravity alone. Turban is the hottest place in China and the arid climate makes water all the more precious. A karez system helps to ideally solve this problem.