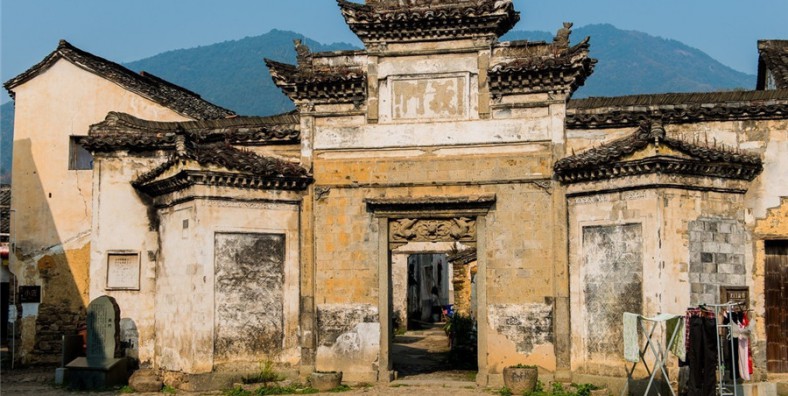 Longmen Ancient Town( 龙门镇)  is situated on the southern bank of Fuchun River in Fuyang (富阳市), about 50 kilometers away from downtown Hangzhou, which is a town famous for its well-preserved architecture of the Ming and Qing dynasties (1368-1911). The town was named after the nearby located Longmen Mountain. Longmen Ancient Town was said to be the hometown of Sun Quan(孙权), the emperor of the Three Kingdoms state (220-280) of Wu during the third century. It is a modern tourist attraction ranked as an AAAA level national scenic spot.

The town still retains Ming-or Qing-style building complexes. Among them are ancestral halls, homes, pagodas and memorial arches – most of which have a history of over three hundred years. The best known ones include Hundred Flower Hall (百花厅) and Hundred Lion Hall (百狮厅). These structures are good examples of classical southern architecture and feature intricate wood carvings from Zhejiang folklore. The favourite decorative motifs used are from Three Kingdoms stories popular since the Song Dynasty.

Taking the defensive radial streets and lanes as the framework, Longmen Ancient Town is developed into a mazy dwelling settlement centered in ancestral temples and halls. All these exquisite folk houses, halls, ancient towers, ancient bridges, memorial arches and temples with high value have made Longmen Ancient Town a rare ancient town in mountainous area that possesses the most well-preserved ancient architectural complex of Ming & Qing Dynasty in South China.

The long history of Longmen ancient town is a magnet for tourist and has also attracted many well-known films and television works, such as “Switch”, “Ji Gong”(济公), “The girl in blue “(蓝色少女) and so on. Longmen ancient town is also renowned for its traditional celebration of the Lantern Festival. The elaborate dragon, horse and lion dances that take place every year during Lantern Festival and Dragon Boat Festival thrill throngs of onlookers each year.

“Bamboo Horse Dance”is a local theatrical performance, which is unique for their portrayal of Sun Quán as a hero. Sun Quan is normally seen as an ambivalent and often frustrated leader In traditional Three Kingdoms folklore, who is time and again bested by Liu Bei and his cunning strategist Zhuge Liang. At Longmen, the favorite plays are “Burning Red Cliffs”, showing Sun Quan’s defeat of Cao Cao at the Battle of Red Cliffs.

The town holds a millennium-old temple carnival every year on the first of September in Chinese lunar calendar, when residents of all ages gather together to watch the traditional Chinese opera and offer sacrifices to Buddha or their ancestors. Those in their thirties donate their labor to build or improve roads in the town.

At the Chinese Lantern Festival, varieties of self-made lanterns are lighted and hung on the beams of all ancestral temples. Portraits of ancestors are put up at main halls, in front of which myriad pastries and refreshments are placed. Families offer incense and pray to their ancestors.