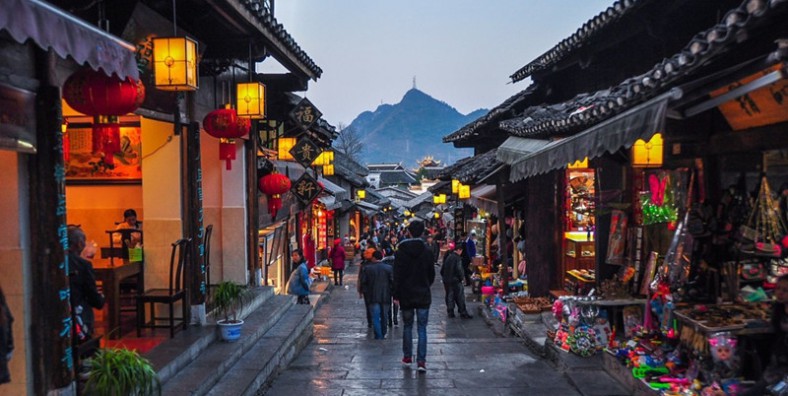 Qingyan ancient town, one of Guizhou's four largest ancient towns, is crisscrossed with exquisite design and craftsmanship of ancient Ming and Qing dynasties, with temples, pavilions, carved beams and cornices.

Why is Qingyan Ancient Town so Special?

In September 2005, Qingyan Ancient Town Scenic Spot was announced as the second batch of famous Chinese historical and cultural towns by the Ministry of Construction and the State Administration of Cultural Heritage. In 2013, it was praised as one of the most attractive small towns in China in the Summit International Intangible Cultural Heritage Protection and Heritage Tourism Planning Project. In 2006, it was listed as the first small town with Chinese characteristics by the Ministry of Housing and Construction. On February 25, 2017, it was rated as a national 5A scenic spot.

Qingyan Ancient Town was built in the 11th year of Hongwu of Ming Dynasty (AD 1378). It was built because of the stationing of troops in Ming Dynasty. It is named after the blue rock. It is a mountain military city evolved from the military city defense.

Qingyan ancient town is surrounded by mountains and hills. It is only natural that the city gates and walls are all built of stone.

Qingyan ancient town is a building with a deep historical background. Climbing a hillside not too high on the side of the town can give a bird’s eye view of the whole town. The town is not built on a flat surface but on a rugged hillside. Looking from a height, the whole town’s pattern gives a three-dimensional aesthetic feeling that is hard to see in other ancient towns. In addition to numerous temples, Qingyan ancient town still has a Christian church and a cathedral. Various religions coexist harmoniously, forming its unique style.

Elephant trunk woodcarving is very common in Qingyan residential buildings. Most of them are used in front of houses with overhanging eaves. The overhanging eaves need to bear weight. Carving them into an elephant trunk is undoubtedly a manifestation of strength. The section of the forest pillars of Qingyan residential houses is round, square and square with corners. Circular and square are called columns and square columns, while square plastering angles are called “sesame columns” because their column shapes are similar to sesame rods.

Qingyan residential houses have many waist doors, and their door fights and handles are quite learned. Many people’s door-to-door fights are deliberately carved into peach shapes and ruyi shapes. Or tiger head or ox horn. Some handles are made into gourd-shaped, pomegranate-shaped, auspicious cloud-shaped or wishful-shaped.

Historically, there were eight arches inside and outside the four gates of Qingyan ancient city, only three of which are preserved now. The architectural shapes of the three memorial arches are basically the same, all of which are of the four pillars, three rooms and four roofs on the third floor, with a height of 9.5 meters and a width of 9 meters. They face north and back south, and belong to the architectural style of stone memorial arches in the Qing Dynasty.

Located at No.3 West Street, adjacent to Ciyun Temple. It was built in Kangxi of the Qing Dynasty and rebuilt in Jiaqing of the 3rd year (1798). It was not a Taoist temple at the earliest, but Jiangxi Guild Hall, a place for merchants from south to north, which was later transformed into a Taoist temple.

During the Anti-Japanese War, the Qingyan city wall was intact, the four gates remained isolated and safe, and many “asylum seekers” were accepted.

When the Kongming Lantern is set off, it is usually after the Baoding is set off. The lampshade of the kongming lantern is cylindrical, about five feet high, with the top capped.

“Water Mouse” is a kind of specially-made small fireworks that can be set off on the water in general festivals.

The routes to the ancient town are:
1. The bus from No.32 Yanan West Road, Guiyang City to Qingyan takes about 50 minutes.
2. Huaguoyuan Wetland Park takes the bus from Guiyang to Qingyan (express bus 210), which takes about one hour.
3. Guiyang Railway Station takes Route 203 to Qingyan.
4. jinyang bus station, take bus no 220 /223 to jinzhu town and change to bus no 210.
5. Guiyang Longdongbao International Airport has special lines for Huaxi and Qingyan, with the first flight of Qingyan at 10:30 and the last flight at 19:00.

Starting from October 1, 2018, the price of tour packages in Qingyan ancient town scenic spot in peak season will be reduced from 80 yuan/person to 60 yuan/person.

One thought on “Qingyan Ancient Town in Guiyang”