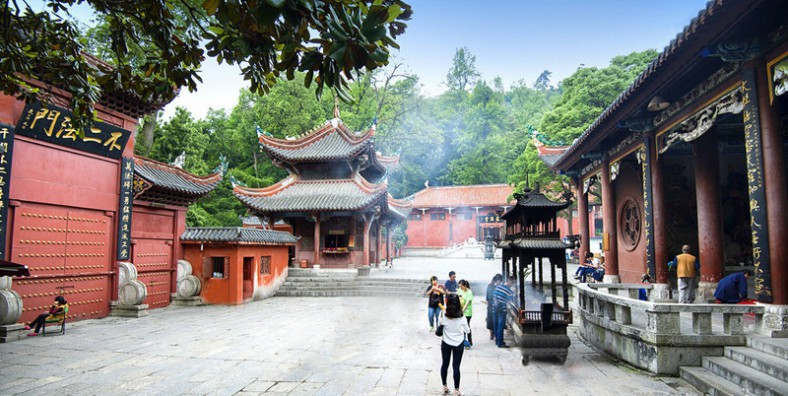 Hongfu Temple, located in Qianling Mountain in the center of Guiyang City, was founded by Chisong Monk (1634-1706) in the 11th year of the reign of Emperor Kangxi of the Qing Dynasty (1672). It was initially called "Hongfu Temple" and later changed to "Hongfu Temple".

Why is Hongfu Temple so Special?

Built in 1672 in Qing Dynasty (1644-1911) by Monk Chisong, Hongfu Temple is the most important Buddhism temple in Guizhou Province. Its name Hongfu means to expand the Buddha’s will of salvation, and to benefit all living creatures. Hongfu Temple was listed into the 142 national key Buddhism temples in 1983, and under the province’s protection at the same year.

The temple was originally built in 1672, eleventh year of the Kangxi Emperor, by monk Chisong (赤松), under the Qing dynasty(1644–1911). After the Parinirvana of Chisong, his disciple Zhai Mai (翟脉) succeeded the abbot. In 1739, in the 4th year of Qianlong period, the Qing government bestowed a set of Chinese Buddhist canon on the temple.[1][2]

In 1929, monk Guoyao (果瑶) founded the Guizhou Buddhist College in the temple.[2]

After the founding of the Communist State, master Huaiyi (怀一) served as abbot of Hongfu Temple.

During the ten-year Cultural Revolution, the temple was dilapidated with huge losses of the cultural relics.[2]

After the 3rd Plenary Session of the 11th Central Committee of the Chinese Communist Party in 1983, Hongfu Temple was designated as a National Key Buddhist Temple in Han Chinese Area by the State Council of China.[2]

On July 28, 1987, the government transferred the management rights to the temple.

Under the eaves of the Shanmen is a plaque with the Chinese characters “Hongfu Temple” written by the former Venerable Master of the Buddhist Association of ChinaZhao Puchu. A pair of Chinese guardian lions stands on both sides of the Shanmen.

Precious cultural relics and historical sites in the temple

A great many precious cultural relics and historical sites are found in Hongfu Temple; the ancient Jiuqu Path, the Ancient Buddhism Cave that toured by Xu Xiake (徐霞客, a famous traveler and writer of Ming Dynasty), Tower Forest for past abbots of the temple, tablets corridor with poetry inscribed by Chu De, Dong Biwu, etc. ancient bronze bell of Ming Dynasty, kinds of sutras, and over 100 calligraphies and paintings collected from famous calligraphers and painters.