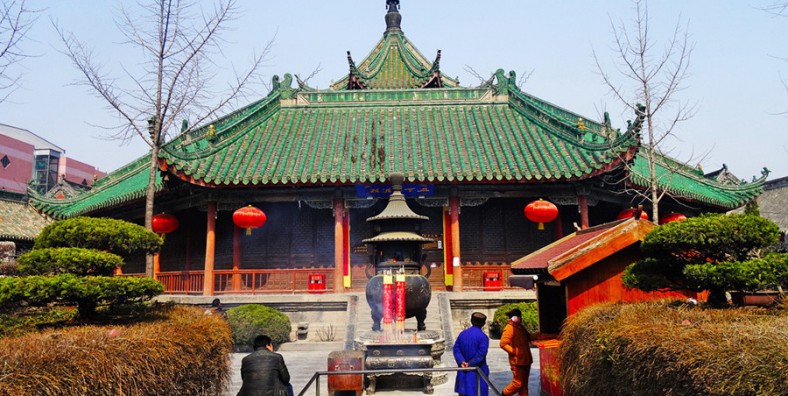 Why is Xiangguo Temple So Special?

Xiangguo Temple is one of the ten famous temples of Chinese Buddhism. It plays an important role in and has extensive influence on the history of Chinese Buddhism. It was originally built in 555 AD during the Northern Qi Dynasty; it has a history of over 1,400 years. In the Northern Song Dynasty, the monastery was enlarged many times and became the largest monastery and the national Buddhist center at that time.

Where is Xiangguo Temple?

If you want to get rid of hustle of transportation and troublesome navigation, you can book a private tour package which covers visiting, dining and transfer from us. Our local tour guide and driver will escort you to Xiangguo Temple with speed and convenience, and take care of all the details. You just need to focus on travel.

Bell Tower and Drum Tower as in most Buddhist temples. The bell hanging here weighs five tons and is 2.23 meters (7.3 feet) tall. Its grazioso sound echoes all over the city, especially in winter. Xiangguo Shuang Zhong (the beautiful sound of the bell on a frosty day) is one of the Eight Scenes of Bianjing (nowadays Kaifeng).

Wooden Statue of the Goddess of Mercy

There is a 6-meter high wooden statue of the Goddess of Mercy with many hands and eyes which was carved during the reign of Emperor Qian Long (1736 -1795) of the Qing Dynasty and which is regarded as a masterpiece of wood carving from that era. It was carved with a maidenhair tree. Each side has six large hands and more than 200 small hands. And there is a small eye in each palm of the small hands, totaling more than 1000 eyes. Thus it got its nick name as Buddha with Thousand Hands and Eyes.

The Hall of Heavenly Kings

The Hall of Heavenly Kings has 5 rooms and 3 doors equipped with delicate cornices and yellow-tiled roofs. In the center of the hall stands a Maitreya Buddha statue seated on the lotus platform with a smile. It is said that he is the legendary Buddha of the Future who will come down to earth as the successor of Sakyamuni, the founder of Buddhism, 240 million years later. On both sides of the Maitreya Buddha statue stand Four Heavenly Kings, each of whom look fierce and seem to rectify all the evils under heaven. North of the Hall of Heavenly Kings are the flower garden and artificial hills.