The activities of Kaifeng's ancestors can be traced back to the Neolithic Age. The Wanlonggang sit(万隆岗遗址) in Wanlong township of Xiangfu district, and the Duantougang site(断头岗遗址) in Weichuan town of Weishi county have discovered some early Neolithic Peiligang cultural sites. Their excavation proves that human activities were already taking place in Kaifeng city as early as 5,000 to 6,000 years ago. Kaifeng has more than 4,100 years of history of city construction and capital construction, including Xia Dynasty, Wei State in Warring States Period, Houliang, Houjin, Houhan and Houzhou in Five Dynasties, Song Dynasty, Jin Dynasty and other dynasties successively established their capitals here. Kaifeng is known as the ancient capitals of eight dynasties, forming the “Song Culture”, which inherited the Han and Tang Dynasties, opened Ming and Qing dynasties and had far-reaching influence.

The Chinese nation has been called "Han" and "Tang" in history because of the prosperity of Han and Tang dynasties. In fact, after Tang Dynasty, there was another peak in the history of cultural development, that is Song Dynasty. Indeed, the Song Dynasty developed and evolved on the basis of inheriting the previous generation's culture, forming a "Song-style culture" with unique charm, including literature, calligraphy, festivals and customs, diet, clothing and other aspects.

When it comes to Song culture, Song Poem is must be involved. Song poem is a brilliant representative of the literature of the Song dynasties, and is called the greatest literature of that generation. The style of Ci poem appeared in the Tang dynasty, and the Tang and five dynasties were only the beginning and growing periods of Ci poem. It was not until the Song dynasties that it reached its peak of maturity and achieved a status equal to that of poetry for later generations. Song peom is a literary genre combining poetry and music, spread widely in the Song dynasties. It is popular in all sectors of Song society, and has a wide range of creative team. Famous Ci poets in the Song Dynasty include Su Shi, Jiang Kui, Qin Guan, Li Yu, Liu Yong, Yan Shu, Xin Qiji, Li Qingzhao, Ouyang Xiu, Wang Anshi, etc.

Historical and Cultural Sites in Kaifeng

The Iron Pagoda, Xiangguo Temple, Baogong Memorial Hall, Yanqingguan, Yuwangtai, Po Pagoda and other key cultural relics in Kaifeng have high research value, historical and cultural value and tourism value. Kaifeng is one of Henan's three major stone carving concentration areas. There are more than 1,000 stone carvings from Han Dynasty to Republic of China preserved and collected in the scenic spots and historic sites. They are valuable cultural relics for studying social economy, history and culture, science and technology and calligraphy.

Kaifeng is also the hometown of opera, from which Henan opera, the largest local opera in China, originated.

Henan opera originated in Kaifeng of Henan province, inherited, reformed, innovated and developed on the basis of Henan Bangzi. After the founding of the nation, since Henan is referred to as "Yu", hence the Yu Opera. Henan opera is famous for its sonorous singing, cadence, merry and lively tune, clear articulation, lively and vivid, and being good at expressing the inner feelings of the characters. With its high level of artistry, Yu opera is widely welcomed by people from all walks of life. Because of its musical accompaniment with Zaomu Bangzi beat, so the early name Henan Bangzi.

Kaifeng is the birthplace of "Henan cuisine", and its Bianjing flavor is also one of the representatives of Henan cuisine, with moderate sour and hot taste, and is suitable for public taste. Tasting Kaifeng's delicious food is not only tastes its flavor, but also tastes its culture. Food culture in Kaifeng has a long history. Among those delicious food in Kaifeng, Li Yu Bei Mian (鲤鱼焙面), Tao Si Bao (套四宝), Tuo Zi Ji (桶子鸡) are popular. Local snack in Kaifeng is also important components of the unique charm of this ancient city, and representative snacks include Xiao Long Bao (小笼包), Xing Ren Cha (almond tea), Yang Rou Kang Mo (羊肉炕馍), Chao Liang Fen (炒凉粉), Ba Bao Fan (八宝饭) etc.

The local population of Kaifeng is mainly the central plains people of the traditional Han nationality. The most brilliant period of Kaifeng population in the same period was the Northern Song Dynasty. As the capital of the Song dynasty, Kaifeng had a population of more than 1.5 million, making it the largest city in the world at that time. Since modern times, Kaifeng's population in the 1850s was about 360,000, while Luoyang and Zhengzhou's population in the same period were only 70,000 and 30,000 respectively. In 1954, nearly 70,000 Kaifeng residents moved to Zhengzhou after the capital of Henan province moved from Kaifeng to Zhengzhou. By the end of 2018, Kaifeng had a total population of 5.256 million, an increase of 26,000 over the previous year. The resident population was 4,564,900, an increase of 15,600 over the end of last year.

Intangible Cultural Heritages and Its Heritors in Kaifeng

Among the five batches of traditional Chinese villages announced, there is only 1 village in Kaifeng listed. It is Xijie Village(西街村) in Zhuxian Town of Fuxiang District, Kaifeng.

Chrysanthemum Fair in Kaifeng is one of the Best Tourist Attractions and Top Things to Do when you travel to Kaifeng, it introduces the main scenic spots, entrance tickets... 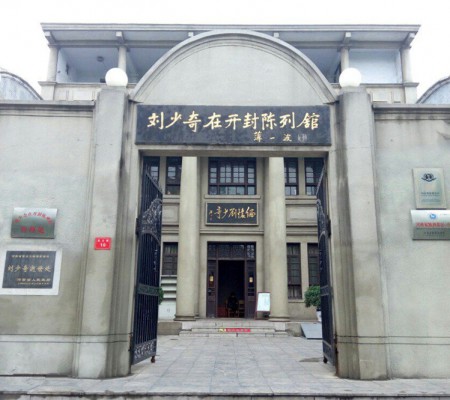 Kaifeng Exhibition Hall of Liu Shaoqi (刘少奇在开封陈列馆) introduces the main attractions, entrance tickets booking, The best time to visit, How to Get there, the highlights, facts, history, photos, weather,...

Kaifeng is one of the Eight Ancient Capitals of China. As with Beijing, there have been many reconstructions during its history. In 364 BC during the Warring States period,...