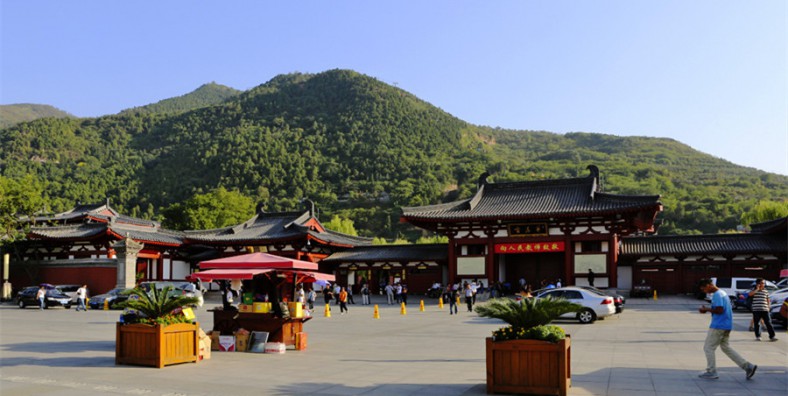 30km east of Xi'an and beside the Terracotta Army, Huaqing Pool features the Imperial Pools of the Tang Dynasty (618 - 907), Pear Garden, Frost Flying Hall, Nine-Dragon Lake, Five-Room Building and Mount Li. Huaqing Pool is famous for the romantic love story of Tang Emperor Xuanzong and his concubine Yang Yuhuan. During his reign, the Emperor Xuanzong spent dizzying amounts of his funds to expand it to a luxurious palace named Huaqing Hot Springs or Huaqing Palace.

Why is Huaqing Palace and Huaqing Pool So Special？

Huaqing Palace, also known as Huaqing Hot Springs, is a well-known historic site and an AAAAA tourist attraction of China. It gets its fame for being the place where the romantic story of Emperor Tangxuanzong of Tang Dynasty (618-907) and his beloved Yang Guifei (or Concubine Yang) took place.

As a matter of fact, the site had been as an imperial palace for emperors’ short stays away from the capital for more than 3000 years. Emperors of Zhou, Qin, Han, Sui and Tang dynasties spent the winter at this place every year. Emperor Zhouyouwang of Western Zhou Dynasty (1046BC-771BC) is said to be the first emperor who ordered to build a palace at the site. In the following dynasties, the palace was repaired and expanded for several times, given the name of “Hot Spring Palace” and finally denominated “Huaqqing Palace” by Emperor Tangxuanzong. The palace was constructed above hot springs, hence the site is also called “Huaqing Hot Springs”.

Li Palace was first built during the Western Zhou Dynasty (1045 – 256 BC) at the foot of Li Mountain, a branch of the Qinling Range, which divides north and south Shaanxi. Standing 1,256 meters high, it is covered with pines and cypresses and looks very much like a dark green galloping horse from a long distance away. In ancient times, Li meant a pure black horse, and this is how the mountain and then the palace got their name.

In the Qin Dynasty (221 – 206 BC), a stone pool was built and was given the name Li Mountain Hot Springs. The site was enlarged during the Han Dynasty (206 BC – 220 AD), and was once again named Li Palace. During the Tang Dynasty (618 – 907), firstly Emperor Taizong ordered enlargement of the palace. Then Emperor Xuanzong, his successor, then had a walled palace built around Li Mountain in the year of 747. It was then known as Huaqing Palace, or Huaqing Hot Spring, because of the hot spring there.

The Tang Emperor Xuanzong used to spend his wintertimes at Huaqing Palace in the company of his favorite concubine Yang. Yang, who was recognized as one of the most enchanting ladies in ancient China, was spoiled by the emperor. He cavorted with the beautiful lady all day and night and neglected state business. He built the luxurious palaces in this area purely for their personal pleasure.

Furong Garden is an imperial garden with static sightseeing which combines with full-bodied style of the Tang Dynasty. There are more than 10 landscapes including Palace of Eternal Life (长生殿), Hot Spring Goddess Pavilion（温泉神女亭）, Furong Lake（芙蓉湖）and so on.

Nine-dragon Lake is next to the Furong Lake scenic area and it is an artificial lake built in 1959 . The lake is divided into two lakes, and there is a nine-dragon bridge stretch across them. Nine-dragon bridge has eight dragons spitting water over the bridge and one dragon under the bridge, then the name nine-dragon came out. To its south and east coast, there are palaces like Chenxiang Palace, Feishuang Palace and Yichun Palace. All these palaces are decorated with red colour and matched with pine, cedar, willow and lawn.

Song of Regret, a famous poem written by the Tang Dynasty poet Bai Juyi to describe the love story between the Tang Ming Emperor and Yang Guifei, was loved by Mao Zedong (the top leader of the People’s Republic of China from 1949-1976) deeply. He wrote this poem on the wall which is today’s Book Wall of Song of Regret. The book wall is spectacular and magnificent with about 10 meters in length, 20 meters in height.

Tang Operras and Recreations is the first royal music art school in Chinese history which was created by the Tang Emperor Xuanzong. It is a center gathering music, dance and drama. It is regarded as the founder of Chinese opera arts.

The performance is presented on the real-scene in Huaqing Hot Springs. It is adapted on the same name poem written by the famous Tang Dynasty poet Bai Juyi (772-846) retelling the lament of the court concubine Yang  Yuhuan (719-756) and  Emperor Xuanzong (685-762) .

The poem-turned drama is presented in four parts with a preclude and 10 scenes. The four parts include “Fall in Love”, “A Sweet Couple”, “Goodbye to Love” and “Meet again on Fairyland”.

How to get to Huaqing Palace

If you want to get out of the traffic and hassle of navigation, you can book a private tour package that includes visiting, dining and transfer from us. Our local guide and driver will escort you to the Huaqing Palace and Huaqing Hot Spring in Xi’an in the fastest and most convenient way and take care of all the details. You just have to focus on the visiting.