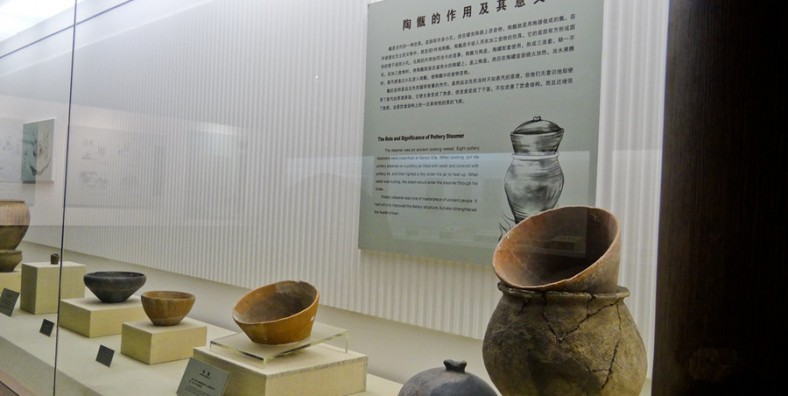 Banpo (Chinese: 半坡, Bànpō) sites is the largest and best-preserved Neolithic Yangshao cultural village sites at China's Yellow River basin. Banpo Neolithic Village Museum is built around a historical site consisting of the remains of a 6,000 year-old village once home to a matriarchal clan community. It is the first Prehistoric site museum in China, located in Banpo Village, 6 km away from Xian city,. This ruin is six kilometers east of Xian. This excavated site of a village dates back to 4500 BC and was discovered in 1953.

Why is Banpo Museum So Special？

The Banpo Museum located on the eastern bank of the Chanhe River of Xi’an is the first Chinese museum built on the remains of prehistorical matriarchal villages along the Yellow River. Being the largest component of Chinese Painted-Pottery Culture (aka Yangshao Civilization (仰韶文化), about 6000 years ago, first found at Yangshao Village of Henan Province, hence the name), the remains were found in 1952 and the site was opened as a museum in 1958 after 3 years’ excavation and construction.

The Banpo site, occupying an area of approximately 50,000 square meters, was divided into three parts: the living area, the pottery making area and the cemetery area. Among the ruins are 46 dwellings, two domestic animal pens and over 200 storage pits, 174 adult tombs, 73 burial jars for kids, six pottery making kilns and many production and domestic tools. The site delivers visitors a vivid picture of the long ago lifestyle of the primitive Banpo people.

From 1954 to 1957, 45 houses, 6 pottery-kiln sites, 250 tombs, over 200 cellars and pits, more than 10,000 pieces of production tools and articles for daily use, and grain and vegetable seeds were unearthed from the site. Of all the relics a ceramic basin with human face and fish painting (人面鱼纹盆) is the most precious one, ranked among first-grade national cultural relics.

The distinct culture of these villagers was known as Yangshao culture. This kind of culture emphasizes the importance of women. So, there are more female tombs and graves here than male, and the women graves contain more objects and valuables than their male counterparts do.

From this museum, we have got some information of that age. The living section of Banpo Village occupied an area of 30,000 square meters. It was surrounded by a moat to protect the village against wild animals and floods. The largest among the remains of the 46 houses, located in the centre of the living area is possibly a meeting hall. There are cellars to store grain and tools outside the houses, and they illustrate the equal distribution and communal features of the society. It is a fascinating peek at the birth of civilization.

Today, the site itself is pretty flat and uninspiring. It takes a lot of imagination to picture how this place used to be and the Disney-style “Yangshao Village” which has been reconstructed at the site makes this area less appealing.

Many of these ceramic wares are bright and colorful and painted with vivid red or black patterns that could be closely connected to the daily life of that time, e.g. fish, deer, frogs, plants. Besides, there are also some triangles, checkered and woven patterns. Now in the exhibition hall the 22 cutting symbols discovered at the remain also can be seen, and some suppose they are primitive writings.

Covering some 3000 square meters, the Banpo Site is divided into residential area, graveyard, and ceramic making area. The site is in the shape of an irregular oval with the residential area in the center. The first houses at that time were constructed with a half underground and another half aboveground. The construction method of building a house on the ground with wooden support and wall was not created until the late primitive commune. Around the residential area there is a chasm (about 300 meters in length, 5 meters in depth, 6 meters in width), which is supposed to be a fortification for guarding against outside tribes and wild animals rather than a pond. Near the houses there are some cellars and hutch that were probably used for storage and rearing livestock.

The supplementary third and fourth exhibition halls facing the Exhibition Hall of Unearthed Relics of Banpo Site are used for theme exhibitions mixing knowledge, enjoyment and art.  Special shows are held here on ethnology, folklore and the history of art related to the prehistoric culture.

How to get to Banpo Museum

If you want to get out of the traffic and hassle of navigation, you can book a private tour package that includes visiting, dining and transfer from us. Our local guide and driver will escort you to the Banpo Museum in Xi’an in the fastest and most convenient way and take care of all the details. You just have to focus on the visiting.