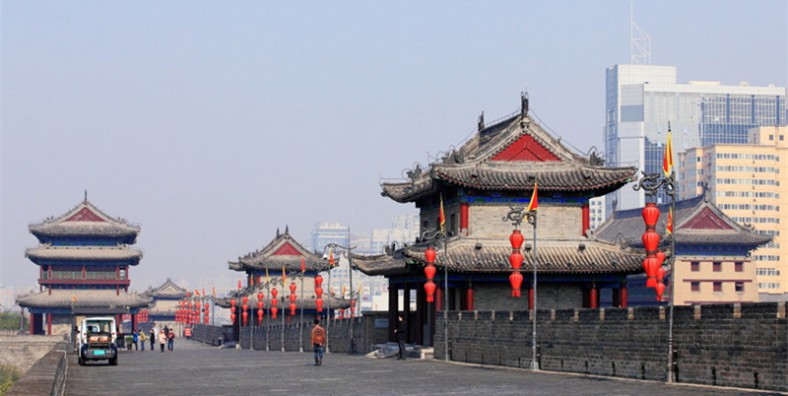 Xi'an City Wall, an ancient capital of China, represent one of the oldest, largest and best preserved Chinese city walls. It was built under the rule of the Hongwu Emperor Zhu Yuanzhang as a military defense system. This extremely well preserved city wall is a wonderful testimony to the engineering and construction skills of the ancient Chinese people. Walking or biking around the wall is awe inspiring with interesting and different views of the old and new parts of Xian.

Why is Xian Ancient City Wall So Special？

The fortifications of Xi’an (西安城墙), also known as Xi’an City Wall, in Xi’an, an ancient capital of China, represent one of the oldest, largest and best preserved Chinese city walls. It was built under the rule of the Hongwu Emperor Zhu Yuanzhang as a military defense system. It exhibits the “complete features of the rampart architecture of feudal society”. It has been refurbished many times since it was built in the 14th century, thrice at intervals of about 200 years in the later half of the 1500s and 1700s, and in recent years in 1983. The wall encloses an area of about 14 square kilometres (5.4 sq mi).

When Zhu Yuanzhang, the first Emperor of the Ming Dynasty (1368-1644), captured Huizhou, a hermit named Zhu Sheng admonished him that he should ‘built high walls, store abundant food supplies and take time to be an Emperor,’ so that he could fortify the city and unify the other states. After the establishment of the Ming dynasty, Zhu Yuanzhang followed his advice and began to enlarge the wall built initially during the old Tang Dynasty (618 – 907), forming today’s scale of Xi’an City Wall.

Xian City Wall was built on base of the Palace of Tang Dynasty. The existing wall was started during the Ming Dynasty in 1370; it is massive, measuring 13.7 km in circumference, 12 m in height, and 15–18 m in thickness at the base.

Top Things to Do on Xi’an City Wall

Walking on the City Wall

As you leisurely stroll on some of the ancient city wall, you can best enjoy its inner and outer walls, watchtowers, moat, and landscaped environs, as well as slightly elevated views of the city. Having an expert guide will help you appreciate the city wall’s history. It is recommended that you visit in the late afternoon for the best combination of temperature and light for photography. It is also wonderful to stay till evening and enjoy the colorfully-lit wall and Xi’an night views.

Cycling on the City Wall

Cycling on the wall makes for a great way to get some terrific views of the city and a great way to get some exercise (after all that eating at the food street). As the wall is 13+ km (8+ miles) long, cycling is a good way to see more (or all) of it. The rental fee for a normal bike (not a tandem) is 40 yuan per bicycle for 1½ hours. We recommend that you rent a bicycle at the foot of the wall for a better price.

The Xi’an City Wall International Marathon is the only marathon in the world on an ancient city wall (though there is also a Great Wall Marathon). It is a grand event combining history, culture, and marathon running. The event was founded in 1993 and has been held annually since. The 2019 Xi’an City Wall International Marathon will be held on Saturday April 20, starting at 8:30 am at the south gate of Xi’an City Wall. The scale of the event is 5,000 people, including 1,600 marathon runners, a 13.7 km event (one lap of the wall), and a 5 km event.

How Was the Wall Built?

Initially, the wall was built with layers of dirt, with the base layer including also lime and glutinous rice extract. Throughout the time the wall has been restored three times. In 1568, Zhang Zhi (the government officer of that period) was in charge to rebuild the wall with bricks. In 1781, another officer, Bi Yuan, refitted the wall and the gate towers. More recently (since 1983) the Shaanxi Provincial Government restored the wall again. The circular City Wall Park has been built along the high wall and the deep moat. The thriving trees and flowers decorate the classical Chinese architecture of the wall, adding additional beauty to the city of Xi’an.

How to get to Xian Ancient City Wall

If you want to get out of the traffic and hassle of navigation, you can book a private tour package that includes visiting, dining and transfer from us. Our local guide and driver will escort you to the Xi’an Ancient City Wall in the fastest and most convenient way and take care of all the details. You just have to focus on the visiting.

Getting to four main gates: