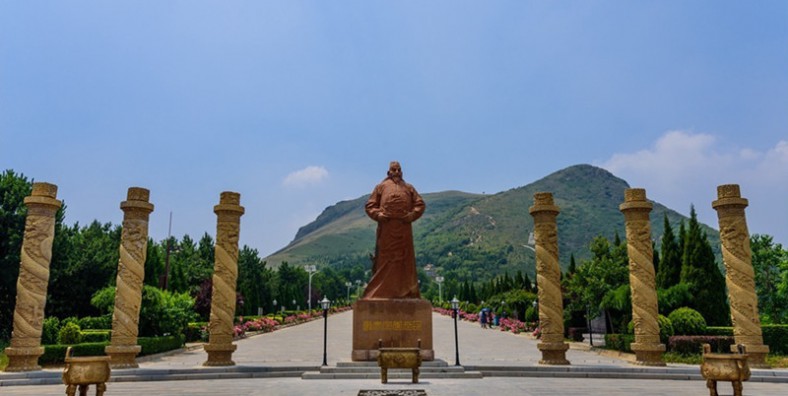 The Zhaoling Mausoleum is the largest out of the 18 Tang dynasty mausoleums, known to date. It is also the largest mausoleum in the world. The mausoleum is located in the central part of Shaanxi Province, 80 km to the north of Xi'an, covering an area of about 20 hectares. Its construction was started in 636 by Emperor Li Shimin (also known as Emperor Taizong) after the death of Empress Wende.

Why is Zhaoling Mausoleum So Special?

Where is The Zhaoling Mausoleum？

The Zhaoling Mausoleum is the largest out of the 18 Tang dynasty mausoleums, known to date. It is also the largest mausoleum in the world. The mausoleum is located in the central part of Shaanxi Province, 80 km to the north of Xi’an, covering an area of about 20 hectares. Its construction was started in 636 by Emperor Li Shimin (also known as Emperor Taizong) after the death of Empress Wende. He ordered to lay an underground passage in Jiuzong Mountain, chosen for the construction, to connect the foot with an underground palace.

How to get to Zhaoling Mausoleum

If you want to get out of the traffic and hassle of navigation, you can book a private tour package that includes visiting, dining and transfer from us. Our local guide and driver will escort you to the Zhaoling Mausoleum in Xianyang in the fastest and most convenient way and take care of all the details. You just have to focus on the visiting.

From Xi’an:
Take a bus from Xi’an North Bus Station/ South Bus Station to Yuanjiacun Village, which is a famous folk culture village, providing all kinds of local snacks. Then, you can walk south for about 2km (1.2mi) to Zhaoling Museum where some relics from Zhaoling are exhibited. Zhaoling Mausoleum is about 12km (7.5mi) from the village, and you can take a taxi or private car there.

From Xianyang:
Take a bus from South Bus Station to Yuanjiacun Village. And then you can follow the above route to Zhaoling Museum and Zhaoling Mausoleum.

Winter is not a good time to travel Xi’an, followed by summer: winter is cold and dry, the temperature is low, cold and biting when the wind blows.At this time to visit the indoor attractions more appropriate. Summer is very hot, especially in the middle of summer, the sun is strong, around noon is the sun exposure; There are occasional storms, but they come and go quickly. Please take precautions against sun protection when you go out.

The mausoleum was a grand engineering project spanning over a decade. Famous painters Yan Liben brothers were among the chief designers of the tomb which features meticulousness and flamboyance in style. Quantities of gold and silver treasures were packed to accompany the deceased emperor, as well as caskets of paintings and books that the Emperor liked. It is said that among the collections was China’s top work of calligraphy Lan Ting Ji Xu (Anthology of Poems Composed at the Orchid Pavilion Party by Wang Xizhi). The Emperor was so fond of it that he would like to go on enjoying it after death.

Like most other royal mausoleums, Zhaoling Mausoleum have suffered from tomb-breaking and looting, the most notable of which was masterminded by a warlord in the Five Dynasties (907~960) period. He broke into the tomb and saw the underground palace which was just as splendid as the royal palaces in capital Chang’an.

Few surface structures survive today. However, a large number of cultural relics have been unearthed at Zhaoling Mausoleum. Around 60 steles have been excavated, bearing important historical data. The engravings contain excellent works of calligraphy by early Tang calligraphers such as Ouyang Xun and Chu Shuiliang. Another impressive group of relics are the six stone sculptures in relief, named “Six Steeds of Zhaoling”. These are six armoured war horses that the Emperor had ridden in battles, in memory of his military achievements as well as the horses’ distinguished services. (Currently, two of these six steed sculptures are preserved in the museum of the University of Pennsylvania, US, while the rest in the Shaanxi Provincial Museum.)

Each of the horses Sa Lutszy, Maogua, Shi Fachi, Bai Tiu, Tae Tsinpyao and Qing Chzhui were masterfully executed in the form of relief sculptures on six 2×1.5 m stone screens. The six beautiful horses immortalized in different poses looks strong and energetic. It seems that another second and they will step down from the screens. The bas-reliefs were installed near the altar in the Zhaolin Mausoleum. Each of the horses has their names and the emperor’s sayings engraved on them.