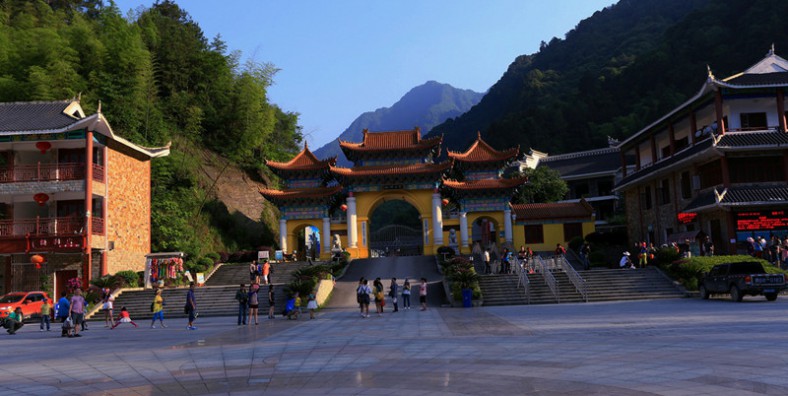 It is the main peak of Wuling Mountains, the National Nature Reserve, and a member of Man and Biosphere Reserve of the United Nations, covering an area of 567 square kilometers.

Why is Mount Fanjingshan National Nature Reserve so Special?

Mount Fanjing becomes a rare global biodiversity base because of its complex terrain and environment. According to research data, there are about 2000 kinds of existing plant species in the area. 31 of these species have been included to the National Protection List, including 6 species of national first-class and 25 species of national second-class protected plants. There are 44 different types of forests like dove trees, hemlock,beech forest,yellow polar etc. Mount Fanjing is also a habitat for endangered animals,like golden monkeys,Tibetan macaque,clouded leopard,serow and black bears. And among them golden monkeys which are also called the only children of the earth with only 800 remaining are key animals under direct state protection.

Buddhism on Mount Fanjing dated back to Tang Dynasty and became prosperous in Ming Dynasty. Ceci Stele established during the reign of Emperor Wanli describes Mount Fanjing which stands without being destroyed and stays famous and unique from ancient to modern times as the ancestor of all the mountains. Mount Fanjing called as the residence for Maitreya by Buddhists since ancient times makes the golden summit with rising moon and sun its center and 4 royal temples and 48 Buddhist convents scattered like stars the base to greet all people.The main hall, Chengen Palace and four or five other small palaces between Golden Summit and Yuejing Mountain protect the two Buddha from two sides.

Golden summit is the center of the mountains. The construction of two palaces on the summit facing each other, two Buddha waiting beside the emperor’s honor guard, boundless field, and the blissful heavenly palace is the striking masterpiece made by White Lotus Community in the Southern Song Dynasty, a miracle in the history development of famous Buddhism mountains and an exotic flower blooming above Golden Summit.

The miraculous natural phenomena and sacred human remains on Mount Fanjing are regarded as “the treasure of the earth and human beings”by the field of science and “the reflection of the merciful Bodhisattva’s spirit” by Buddhist.

The light of Buddha is one of the most exotic wonders on Mount Fanjing. People can often see colorful huge holo flying towards them with a picture of sitting Buddha’s shadows in a solemn atmosphere in the clouds the moment when the sun rises from the east and sets from the west. The scene is surprising and the light is so gorgeous.

According to the authorities, Mount Fanjing is the place where Buddha’s light appears most in all of China’s famous mountains.

The best time to pay a visit is all year round.

Zhenyuan is located on the edge of Yunnan-Guizhou plateau, surrounded by mountains. Zhenyuan ancient town has been an amphibious transportation center since ancient times. In 202 BC, the town became a county established by Liu Bang, the emperor of Han Dynasty, and then became the capital of Qiandongnan Autonomous Prefecture in 1956. The ancient town of Zhenyuan is penetrated by the Wuyang River and is divided into two parts: the south “Wei City” and the north “Fu City”, forming a watery region. Therefore, it is known as “Venice of the East”.
Zhenyuan, as a famous historical and cultural city, is rich in tourism resources. Zhenyuan has a subtropical humid climate with an annual average temperature of 16.4 degrees and four distinct seasons. Therefore, it is an ideal tourist destination all year round.