Recent years, Hunan and Guizhou are now drawing more and more attentions from the globe! Why are there so many people flocking to these two less known provinces in southwestern China? Because they hare something incredible – the Avatar World Zhangjiajie National Park, wonderland Tianmen Mountain, the longest glasses bridge in the world. And right in 2018, Fanjingshan in Guizhou Province was announced as World Heritage Site. What surprisingly good news is that Zhangjiajie and Fanjingshan are not very far away from each other! So take our Zhangjiajie Fanjingshan 7 Days’ tour to explore their unbelievable nature now! 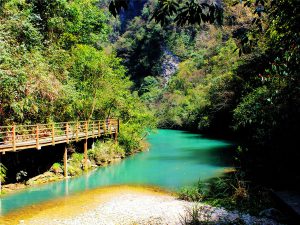 Welcome to Zhangjiajie! Upon arrival, be greeted by our tour guide in the airport or train station who is holding a sign on which says your name. A comfortable vehicle (non-smoking) with experienced driver will transfer you directly to your hotel in the Zhangjiajie Wulingyuan. Your guide will help you check in. The rest of today is on your own to explore this beautiful city. 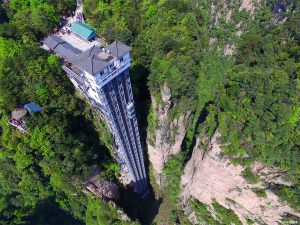 After breakfast, start your full-day Zhangjiajie National Forest Park Adventure. Located 32 kilometers from Zhangjiajie city, Zhangjiajie National Forest Park is the first state-level forest park in China. It is known for its exquisite forests, odd-shaped peaks and rocks, the beautiful canyons, the limestone caves, and the breath-taking panoramic views. The words, such as majestic, eccentric, tranquil, delicate and wild, are not enough to describe it’s beauty.

Firstly, go to take the 326-meter-high Bailong Elevator (the tallest and the fastest in the world) up to Yuanjiajie, which is situated in the north of Zhangjiajie National Park. This scenic area is world famous as the mountains here inspired the floating mountains in the Hollywood movie Avatar. The peaks in Yuanjiajie are nearly at the same height, which makes it a mountain platform great for enjoying sweeping vistas.

Next, take a sightseeing bus to Tianzi Mountain, where you can have a stunning view of the peaks rising one after another. Atop of the mountain offers a full extent of the whole scenic area, which is magnificent and spectacular. There are four wonders in Tianzi Mountain: the Sea of Clouds, the Radiance of the Moonlight, Rays of Sunshine and the Snow in winter.

After the exciting tour, your guide and driver will escort you to your hotel. 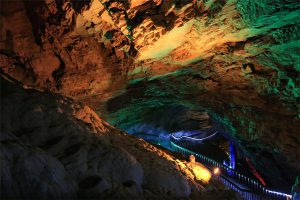 In this morning, you’ll drive about 8 km to see the natural wonder in the Yellow Dragon Cave, also known as Huanglong Cave. It is an underground-lost palace which is praised as the most beautiful cave in the world by UNESCO Experts, with an area of 100,000 square meters, a length of 7.6 kilometers, a height of 140 meters. There are two underground rivers, four waterfalls, 13 caverns and 10,000 stalagmites and stalactites is this huge limestone cave. The Magic Needle and Chair of Dragon King are two most famous sights in the cave.

After the tour, you’ll be transferred to your hotel in Zhangjiajie downtown area. 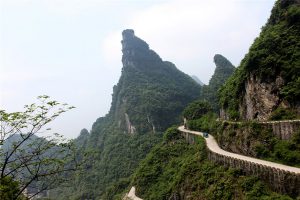 After breakfast, your guide and driver will pick you up at your hotel. On this day, you’ll first take a trip to Tianmen Mountain. Referred to as the “Soul of culture and spirit of Zhangjiajie”, Tianmen Mountain, standing 1,500 meters above sea level, boasts miraculous and unique geographic landform, unparalleled natural landscape, profound cultural connotations.

Experience the longest cableway in Asia with a length of 7200 meters, take photos of Avenue toward Heaven with 99 turns from cable car. On the top of Tianmen Mountain, enjoy the Cliff-Hanging Walkway and avoid the crowds to take some photos; hold your breath and experience the thrilling Glass Sky Walk. Then, visit the natural mountain-penetrating Karst cave – Tianmen Cave. The foot of the cave is wonderful photo opportunity with the hole in the mountain as the background. It is worth waiting for the sunlight to shine through the hole with mist or smoke illuminating the way.

After the tour, your guide and driver will escort you to Fenghuang Ancient Town with 4-hours’ drive. Appreciate the fabulous night view of this ancient town. 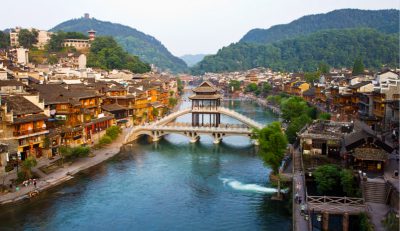 Today, you’ll have a nice tour in Fenghuang Ancient Town. It is located on the western edge of Hunan Province and next to Guizhou. Praised as the most beautiful tiny city in China, it sets an example of what villages were like before the start of modernization. In the town dozens of lanes are paved with stones that run between the wooden houses built on stilts. Generations of local people have stepped on the lanes and worn them down bit by bit. Highlights of your today’s tour will be Phoenix River relaxing boat experience, The Former Residence of Shen Congwen, and the East Gate Tower, etc.

In the afternoon, drive to Jiangkou County, which is conveniently located at the foot area of Fanjingshan. 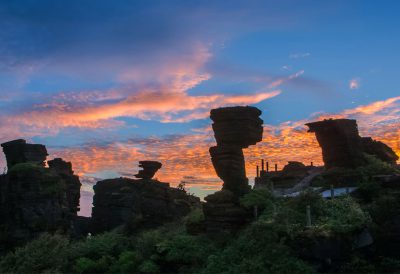 Today is a full day exploration of the incredible Fanjingshan. You will take the South Route to assend the mountain. First take park bus from the tourist center to Yu’ao Station where you will take a cable car up to the mountain top area, which will save you a lot of time for you to spend on the highlighting area.

What to see at Fanjingshan

Located in Tongren, Guizhou province (southwest China), Fanjingshan is the highest peak of Wuling Mountains, 2,570m (8,430ft) above sea level. Besides standing out as a sacred Maitreya mountain for Buddhists, Fanjingshan National Nature Reserve was also established and designated a UNESCO Biosphere Reserve, and later announced as a World Heritage Site in 2018.

Red Cloud Golden Summit, a thumb-like peak, is described by UNESCO as an “island of metamorphic rock in a sea of karst”, believed to have been formed somewhere between 2 million and 65 million years ago. For everyone else, one of the main appeals of visiting Fanjingshan is the stunning views from the summit.

Mushroom Stone is the landmark of Fanjingshan. Big on the top and small at the bottom, it is vividly formed like a mushroom. For more than one billion years , it has been standing there still and hit by the rainstorms, summer heat and winter snow year after year, which is the essence of what Buddhism says about “Remain unbiased” in every circumstance.

Cheng En Temple, located between the two summits with scarlet walls and black tiles, is the main building of Fanjingshan Temple Group and one of the four Royal temples in Fanjingshan which was built in the Ming Dynasty (1368AD-1644AD).

After the fantastic sightseeing, drive to Tongren City for accommodation. 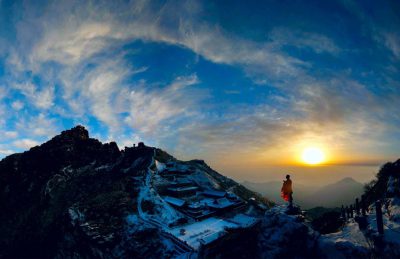 Today is free for you to transfer to next destination.