Tibet Autonomous Region, Zang for short, is located in the southwest of China, the main part of Qinghai-Tibet Plateau, and one of the five autonomous regions for ethnic minority in China. Lhasa is the capital of Tibet Autonomous region. It borders on Sichuan and Yunnan provinces to the east, Qinghai and Xinjiang to the north.  It Neighbors Burma, India, Bhutan, Nepal, Kashmir as well as other countries and regions, the land boundary of more than 4000 kilometers, is an important gateway to the southwest border of China. Famous for the “Roof of the World”, the region has an average elevation of more than 4,000 meters with various complex landforms, such as: high and steep mountains, deep valleys, glaciers, bare rocks and Gobi deserts. It is bitterly hot in summer, with a distinct difference in temperature between day and night.

Other Destinations in Tibet

Known as the Roof of the World, Tibet is the highest place to heaven(4900 meters). It is one of the most beautiful and magical places to visit on the planet, with natural wonder, a treasury of cultural relics and a destination of attractive adventure. Snow mountains and grasslands, scattered herds of yak and nomads on the plateau, spectacular monasteries and unsophisticated smiles, tranquil lake and transparent blue sky, all can be seen on this magic land. Here we list the top must-see attractions in Tibet, so [...]

Would you like to find some unique and impressive experiences in China? Let us to help you. We provide Tibet tours of different themes, such as China Tibet tours, Best Tibet tours, Mount Everest Base Camp tours, Mount Kailash Tour, Qinghai Tibet tour, Tibet hiking tour, Tibet train tour, Tibet Nepal tours, etc. There’s always something that can suit your fondness and meet your needs. Whoever you’re an adventure enthusiast, history fan, or just interested in the amazing natural scenery, Tibet tour is perfect for [...] 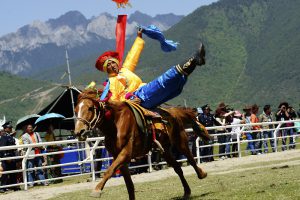 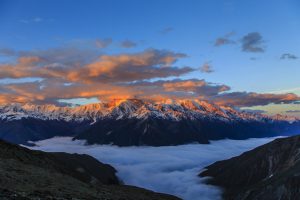 The vast Tibetan Plateau spans a large area which goes beyond the political boundaries of the Chinese autonomous region of Tibet. Tibet climate belongs to the typical high-altitude plateau climate. The weather and climate of Tibet are largely shaped by its complex terrain and atmospheric circulation. The climate of different places of Tibet varies greatly, with the temperature changing greatly in one day. It mainly consists of tropical montane humid monsoon climate, plateau temperate monsoon climate, frigid plateau monsoon climate and subfrigid monsoon climate. Features of Climate in [...]

More Tibet Climate & When to Go >>

With the rapid economic development of Tibet and the strong support of central government, transportation condition in Tibet has changed greatly in recent 30 years. Centered around Lhasa, a transport network has taken shape in Tibet, including highways, airlines, railroad, etc. Now, Tibet's major cities have their own transportation systems too. While for foreign tourists, there are some restrictions on traveling to Tibet. So your vehicle has to be arranged by local travel agency. How to Get to Lhasa By Air Currently, there are five [...]

Tibet’s culture is unique in the world. Tibetan traditions have things to do with Tibetan Buddhism and its unique topography. There are over twenty festivals throughout the year in Tibet. The festivals are the time for people to get together, dancing and singing. Tibetan folk songs and dances are an indispensable part of every Tibetans’ life, especially during festivals or important events. Nowadays, the festivals also celebrated for folk-custom and entertainment. Among them, Tibetan New Year, Butter Lamp Festival, Monlam Prayer Festival, Saga Dawa, Shoton Festival, [...]

Tibet is a word that referred real Shangri-La, the forbidden land and the holy land of your innermost desire. Due to the high altitude, Tibet is a land of snows as well as a mysterious place to explore. Snow mountains and grasslands, scattered herds of yak and nomads on the plateau, spectacular monasteries and unsophisticated smiles, tranquil lake and transparent blue sky, all can be seen on this magic land. In order to give a better travel experience in Tibet, [...]

Tibet is in the west of the Central China plain, and within mainland China Tibet is regarded as part of 西部 (Xībù), a term usually translated by Chinese media as “the Western section”, meaning “Western China”. It borders Xinjiang Region and Qinghai Province to the north, Sichuan and Yunnan to the east, India, Nepal, Sikkim, and Burma to the south. Find more information about Tibet by checking Tibet maps. [...]

Maps of the Potala Palace in Lhasa

When you travel to Tibet, accommodation is an important factor that you should bear in mind. The facilities and service of hotels are the  key indicator to evaluate. With the rapid development of tourism in Tibet, the accommodation conditions in Tibet have been significantly improved. Even then, the overall level of accommodations in Tibet is lower than that in other places of China.  The star-rated hotels in big cities, such as, Lhasa, Shigatse and Lyingchi, are avavilable. Meanwhile, hotels [...]