Located in the southeast of Tibet, Nyingchi owns the biggest elevation gap in the world with the lowest elevation of only 900m and the highest elevation of 7,782m (altitude of Namjagbarwa Peak). Literally meaning the Throne of Sun, Nyingchi is renowned as the “East Switzerland” and “Jiangnan of Tibet (Jiangnan in Chinese means the fertile and prosperous area in the south of the Yangtze)”, blessed with beautiful lakes, deep gorges, immense forests, azalea-filled meadows, etc.

▪ Medog County: the only county in China without a single road. It is the lowest and warmest place in Tibet and also the perfect hiking destination integrated with collapse, debris flow, leech, poisonous insects, high mountain, canyon and rainforest.

▪ Yarlung Tsangpo Grand Canyon: The downstream of Yarlung Tsangpo River makes a sharp turn around Namjagbarwa Mountain and flows to the south in Nyingchi, hence the precipitous canyon.

Other Destinations in Nyingchi

Because of its characteristic geographic location and diverse climate, Nyingchi attractions get its uniqueness in different ways. In spring, you can catch the sight that the delicate and charming peach flowers are in full blossom and the verdant plants all over the mountains and plains are about to sprout. It’s recommended to appreciate the spectacularity of Yarlung Tsangpo Grand Canyon and Namjagbarwa Peak. Taking part in Nyingchi Peach Blossom Festival will bring you a lot of fun. [...]

Being one of the top destinations in Tibet, Nyingchi will never let you down. You can spend a leisure time around Yarlung Tsangpo Grand Canyon and immerse yourself in the strong Buddhist atmosphere by visiting the landmarks of Nyingchi. There are all kinds of packages as follows. Check these tours, You could find the one you may be interested in. Nyingchi Tours are normally arranged with Lhasa or other stunning places in Tibet. You can not only catch a glimpse [...] 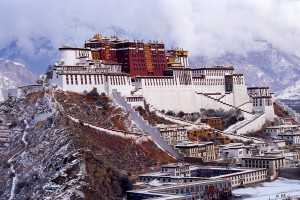 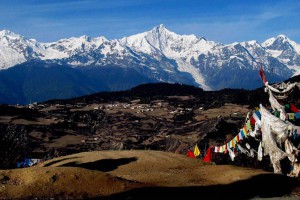 ‣  Introduction to Nyingchi Climate Nyingchi is situated at the north bank of Yarlung Zangbo River, lower reaches of Niyang River, at the southeast part of Tibet. The terrain here is dangerously steep with river valleys. The average altitude is 3,000 m with relative height difference of 2,200 – 4,700 m. Nyingchi is the prefecture with lowest altitude in Tibet. Niyang River slowly flows through the county surrounded by mountains. There is abundant rainfall and the climate here is [...]

More Nyingchi Climate & When to Go >>

Located in the southeast of Tibet, Nyingchi borders with Lhasa to east, Shannan to southwest, Qamdo to south and Nagqu to north. Taking flights and driving are the two major ways to get to Nyingchi. How to Get to Nyingchi By Air Nyingchi Mainling Airport is located in the Mainling County, 40 kilometers north of Bayi District. Up to now, there are flights to Lhasa, Chengdu and Chongqing. The airport shuttle bus costs 25 yuan per person [...]

Various Tibetan festivals are celebrated in different ways in Nyingchi. It is suggested to visit Nyingchi during the festivals and enjoy activities with the local people if time is free. Festivals and Activities in Nyingchi Tibetan New Year On Tibetan New Year's Day, people bring their offerings and highland barley wine to their own crops to sacrifice the Harvest Goddess. Everyone in the ground sets up a long pole, hanging streamer on the top of the pole, and wheat straw bound on the lower. People build an altar in [...]

Nyingchi is blessed with beautiful lakes, deep gorges, immense forests, azalea-filled meadows etc. you hardly believe that there is such a picturesque and fertile heaven land in wild Tibet. With available daily flights and lower elevation, Nyingchi can be the first stop of your Tibet tour. It is suggested to have a 7~8 days Nyingchi and Lhasa tour. Spend two days on picturesque Lulang Forest, breathtaking Midui Glacier, and mirror-like Rawu Lake first, then go to Lhasa and visit the majestic Potala [...]

Located in the southeast of Tibet, Nyingchi borders with Lhasa to east, Shannan to southwest, Qamdo to south and Nagqu to north. Taking flights and driving are the two major ways to get to Nyingchi. If we go to Nyingchi, maps are good support for us. To help you have a better understanding of Nyingchi, we provide you different Nyingchi maps including Nyingchi transportation map, Nyingchi tourist attractions map, Nyingchi region map and Nyingchi location map, etc, through which you can probably know [...]

Where to Stay in Nyingchi As a renowned tourist destination in Tibet, more and more hotels gather in Nyingchi centered in Bayi District, the largest district along the stretch of travel route. Bayi District is a nice place for overnight as well as a transportation center in Nyingchi. Of course, Bayi District is a place full of attractions, such as the grand Nyang-chu Valley, beautiful Segyi La Mountain, and full of atmosphere of humanism-Tashigang Village. The hotels in Nyingchi is relatively more pleasant than other places [...]