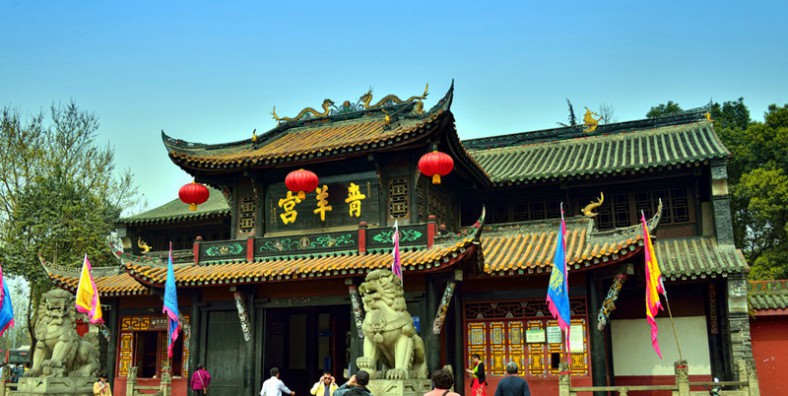 Why is Qingyang Palace So Special?

Where is Qingyang Palace?

Qingyang Palace is located in the southwest suburbs of Chengdu, 3 kilometers from the city center. The temple lies about 8 km from Chengdu Railway Station, and about 20 km from Chengdu Shuangliu International Airport.

How to Get to Qingyang Palace?

If you want to get rid of hustle of transportation and troublesome navigation, you can book a private tour package which covers visiting, dining and transfer from us. Our local tour guide and driver will escort you to Qingyang Palace with speed and convenience, and take care of all the details. You just need to focus on travel.

The most magnificent of these buildings in Qingyang Palace is the Eight Trigrams Pavilion. Built on square foundations, with a colored glazed dome on top, this octagonal building reflects the ancient Chinese philosophy that ‘the sky is round and the earth is square’. Being a landmark of Qingyang Taoist Temple, it features a square foundation and a cylindrical body.

The Sanqing Hall includes two striking bronze goats. It was said those two were got from Beijing in Qing Dynasty. Actually one of the goat has a strange appearance. It has the chicken’s eyes and dragon’s horns. Surprisingly , the statue combines the characteristics of different animals, shch as it has a mouse’s ears, an ox’s nose, a tiger’s claw, a rabbit’s mouth, a dragon’s horns, a snake’s tail, a horse’s face, a goat’s beard, a monkey’s neck, a chicken’s eyes, a dog’s belly and a pig’s thighs.

Tang Emperors Hall is the last but highest hall where the statues of Li Yuan (first emperor) in Tang Dynasty, his wife and his son emperor Li Shimin enshrined. The statues of four famous officials are enshrined in two sides of the hall, including Yuchi Gong and Qin Shubao on the right while Weizheng and Lijing on the left.