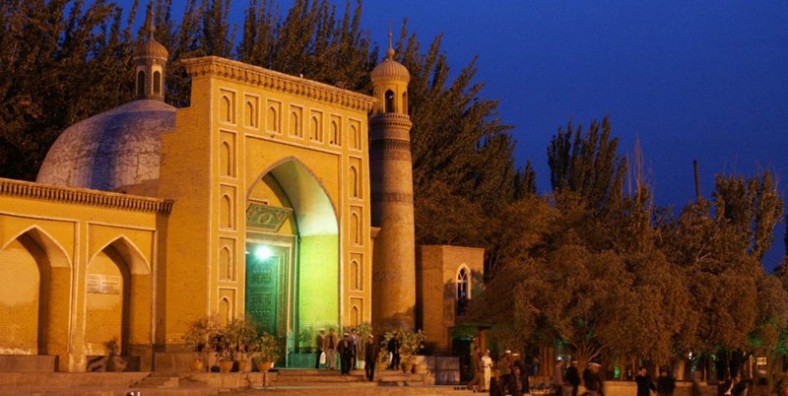 The IdKah Mosque is the largest mosque in China. The mosque was built by Saqsiz Mirza in 1442 (although it incorporated older structures dating back to 996) and covers 16,800 square meters.

Why is Idkah Mosque So Special?

IdKah’ means ‘a place of praying and celebrating in festivals’. The Id Kah Mosque is located on the central square in Kashgar City, Xinjiang Uigur Autonomous Region. As the biggest mosque in China, it is a group of old Islamic constructions with strong ethnic style and religious features.

It is said that this place was once a cemetery. The present Id Kah Mosque was built in 1442 as a very small structure. Several renovations and enlargements have created it with today’s scale and style.

Located on the west side of Atigal Square in Kashi City, Xinjiang Uygur Autonomous Region, it was founded in 1442 and has a length of 140 meters from north to south and a width of 120 meters from east to west. It covers a total area of 16,800 square meters.

IdKah Mosque gate tower is in the front of the IdKah Square, sky blue temple gate is 4.3 meters wide, 4.7 meters high, on each side of the door there is connected short wall; Outside there is 12.5 meters brick column on both sides. To the top there is a tower (bunker building, which is for mosque staff summoned Muslim to attend religious service).

Enter the mosque gate is an octagonal hall, there is a 20 mu big garden, on both sides of north and south there is a row of 18 scripture halls, which are the place for Imam to sermon and for religious students to study scripture. It has two pools, surrounded by towering poplar, although it is in the city center, the inside of mosque is quiet.

Prayer Hall is in the west end of the mosque, separated by a big yard with grid wall. Prayer Hall is divided into 3 parts of inside, outside and the entrance, all are more than a meter above the stylobate; The total length from north to south is 140 meters long, 19 meters deep. So width of large prayer hall, “not only are not included in domestic, is also rare in the world.” (The Chinese Islamic Architecture, page 164). Outside the mosque there are 140 green carved patterns stakes up to seven meters, supporting the white ribbed ceiling.

The gate of IdKah mosque is made of yellow bricks with white plaster jointing. the outline is clear and very eye-catching. The main entrance is 12.6 meters high, the towers on both sides are nearly 18 meters high, and the doors are 4.7 meters high and 4.3 meters wide.

There are 13 fan-shaped steps in front of the gate. The corridor is the one that steps up. There are also two copper-plated wooden doors, which are tall and magnificent.

The wall above the mosque gate is a huge platform 8 meters long, 10.5 meters above the ground. Every grand festival, the platform resounds through the sky overnight with sheepskin drums and suona, creating a joyful atmosphere for the tens of thousands of muslims gathered in Id Kah square. This is a sacred place and a place to celebrate festivals. As the entrance gate building, its plastic arts are the best and can be called a model of ancient Uyghur architectural arts. It has become a symbol of Kashgar ancient city.

The south wall and the north wall of the main hall have two doors and one window respectively, and the main hall has 18 pillars. There are 14 niches on the west wall and 4 niches on the north wall of the outer hall. The southwest wall outside the mosque has 11 niches and the south wall has 4 niches. In the middle of the seventh and eighth niches, there is a double door. This is the back door of the mosque. Inside the door is a small courtyard. There are five colored caisson ceilings outside the mosque in the north, 3.6 meters long and 3.2 meters wide, and four in the south.

The Importance of Idkah Mosque

The IdKah mosque is not only an essential and important place for religious activities in Xinjiang region, but also an important institution for spreading Islamic culture and cultivating talents in higher education in ancient times. many post-islamic clerics and scholars from north and south Tianshan mountains and even central Asia graduated from it. Other influential poets, writers, historians and translators also received strict academic training here in their early years. After the founding of the People’s Republic of China, some respected law-abiding patriotic religious figures in the mosque were also elected as representatives of the people and members of the CPPCC. They also made contributions to Xinjiang’s history and religious studies.