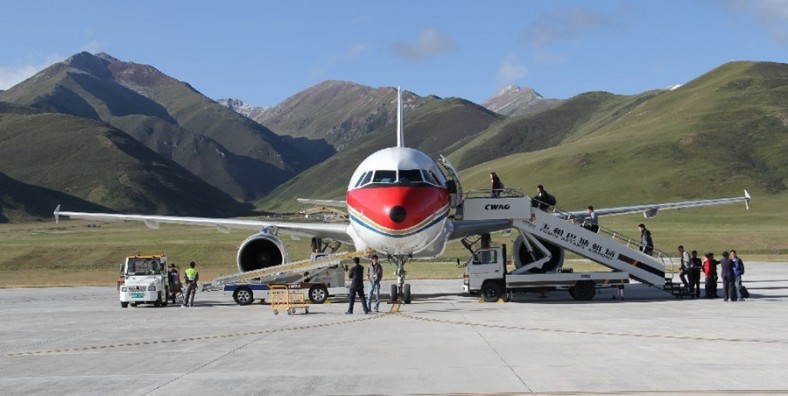 Yushu Batang Airport (Chinese: 玉树巴塘机场) (IATA: YUS, ICAO: ZLYS) is the airport serving Yushu City in Qinghai Province, China. It is located 18 kilometers to the south of the city center, Gyêgu, at the 3,890 meters elevation about the sea level, which makes it the highest civilian airport in Qinghai Province,[1] and one of the highest in the world.

Yushu Batang Airport has a 3,800 meter-long runway, and can receive A319 aircraft. The passenger terminal is designed to serve up to 80,000 passengers per year.[1] According to the CAAC statistics, the airport served 7,484 passengers during 2009, the first (incomplete) year of its operation.[3]

The airport played an important role in the delivery of rescue personnel and relief supplies to the area affected by the 2010 Yushu earthquake. The facility was re-opened at noon on the day of the earthquake (Wednesday, April 14), and the first flight with personnel and supplies of the China International Earthquake Rescue Team landed there at 8 pm the same day.[4]

One thought on “Yushu Batang Airport”