Also called “Mountain City”, Chongqing is also a major port of the upper Yangzi River and gateway to the famous “Three Gorges”. This city tour is specially designed for those who want to explore the highlights of Chongqing including Chongqing Zoo, Ciqikou Ancient Town, Three Gorges Museum, The First Corridor across Yangtze River and Hongya Cave. 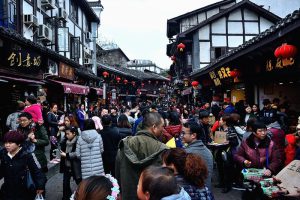 Morning, met by tour guide and escorted to visit Chongqing Zoo, which was first built in 1953 and officially opened to the public in 1955. There are more than 240 species of animals and over 4,200 in total.

Then head to Ciqikou Ancient Town. It dates back to the late Ming Dynasty and has being the symbol of Old Chongqing, which is also a great place to stimulate the tastebuds and find unique souvenirs.

After that, drive to Three Gorges Museum. It is one of the largest museum of the country. Learn about the geography of Yangtze River and the world-famous project Three Gorges Dam.

Afterwards continue to visit “The First Corridor across Yangtze River” to have a panoramic view of the mountain city and Yangtze River. Yangtze River cableway is recommended in a clear day.

At last, move on to Hongya Cave to end today’s Chongqing tour. With a history of over 2,300 years, it was a military fortress from the ancient Ba State to the Ming and Qing Dynasties.

After the tour, be escorted to your hotel and service ends.