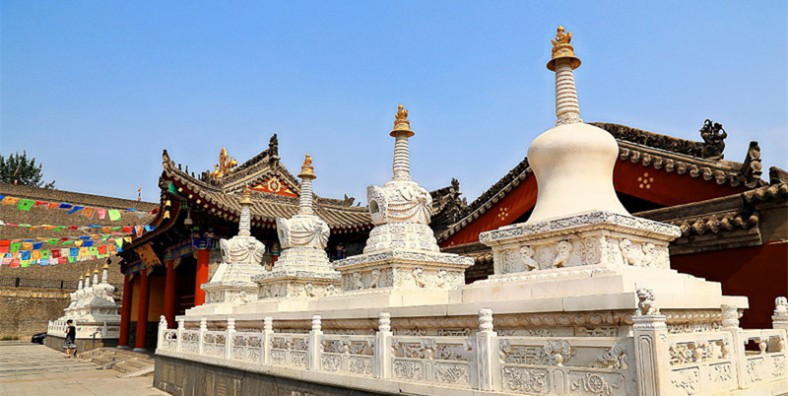 Guangren Temple is a Tibetan Yellow Temple (Gelug) in Shanxi. The treasure of the temple is a thousand-handed Guanyin statue. It is golden and sparkling. There are countless Tang Dynasty cultural relics inside, which are full of the style of Tibetan Buddhist monasteries. The inscription can also be viewed in the temple. The inscription is written by Kangxi, which records the construction process of the temple. The rice paper has been yellow, but the writing is apparent and dignified. It is a masterpiece of calligraphy.

Why is Guangren Temple So Special？

Where is The Guangren Temple?

Guangren Temple, located in the north-west City Wall of Xi’an, is the only Tibetan Buddhist monastery in Shaanxi Province. Built in 1705 when the Emperor Kangxi of the Qing Dynasty (1644-1911) patrolled to Shaanxi, this temple was a Xanadu for the Grand Lama of the Northwest and Tibet when he passed through Shaanxi along the road to Beijing to meet with the emperor. It is a witness to Tibetan and Han nationality’s cultural communication and national solidification.

Guangren Temple was first established by Kangxi Emperor in 1705, during the 44th year of Kangxi period (1661–1922) of the Qing Dynasty (1644–1911). During the Qing dynasty, a largest number of Tibetan Buddhist leaders had to gave an audience to the emperor in Beijing. Therefore, the Qing court built this Tibetan Buddhist temple in Shaanxi to provide places for the religious leaders to get accommodation and participate in Buddhist activities.

After the fall of the Qing dynasty in 1911, the temple was used as an office of the local government. In 1931, the bombs blew up the abbot’s room, but soon it was reconstructed by Yang Hucheng. In 1952, the temple was renovated and redecorated under the state financial allocation. In 1983, it has been designated as a National Key Buddhist Temple in Han Chinese Area by the State Council of China.

Upon entering, you are faced by a colossal brick spirit wall – 6m high, 10m long and 1m thick. Of the temple halls beyond, notable shrines include the Hall of the 1000 Hand Guanyin – containing a rather masculine looking multiarmed Goddess of Compassion – and the Permanent Altar Lamp (万年灯; wànnián dēng), a wick floating in 108 jīn worth of oil within a protective shelter. The light represents wisdom, and as such is a lamp of knowledge, undying in its brightness.

The Central Hall (主殿), surrounded by prayer wheels that you revolve clockwise as you walk clockwise around the hall, houses an effigy of the Bodhisattva Tara (绿度母), with attendant statues of Wenshu and Puxian. In other side halls assemble further divinities, including the three-faced Uṣṇīṣa Vijaya (尊胜佛母) and the God of Wealth, who stares out from a scene of golden opulence, bottles of Maotai before him.

A further mesmerising spectacle is the Hall of a Thousand Buddhas (千佛殿), with its glittering gold and vermilion interior, and the final hall, the Depository of Buddhist Scriptures (藏经阁), containing a huge effigy of Buddha as well as the aforementioned, and highly rare, golden representation of Sakyamuni. A solitary ancient bodhi tree also grows from the temple soil.’

Eight Treasures in the Temple

Six Rare Trees in the Temple

Six Horizontal Tablets in the Temple

How to get to Guangren Temple

If you want to get out of the traffic and hassle of navigation, you can book a private tour package that includes visiting, dining and transfer from us. Our local guide and driver will escort you to the Guangren Temple in Xi’an in the fastest and most convenient way and take care of all the details. You just have to focus on the visiting.