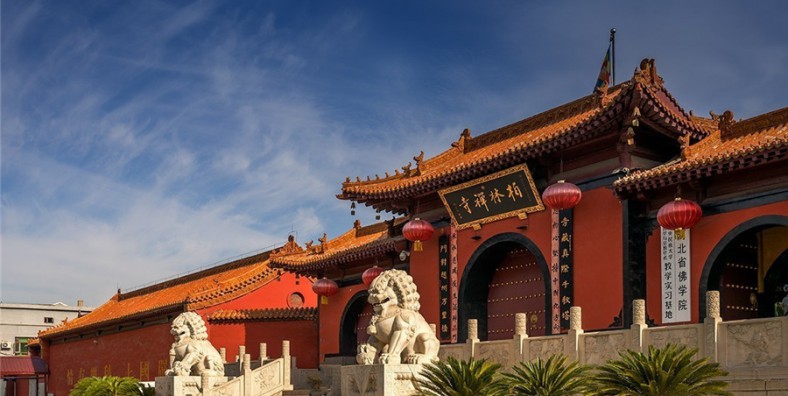 The Bolin Temple was built in the early years of the Eastern Han Dynasty (around the third century AD), and has a history of more than 1700 years. In the past, it was famous for the ancient Guanyin temple.

The Bolin Temple was built in the early years of the Eastern Han Dynasty (around the third century AD), and has a history of more than 1700 years. In the past, it was famous for the ancient Guanyin temple(古观音院), which was called Yong’an temple(永安院) in Song Dynasty and Bailin temple(柏林禅院) in Jin Dynasty. In the Yuan Dynasty, the name of “Bailin Temple” began to appear in a holy edict given to the temple by the emperor. At that time, the cypress became a forest, so it was named “Bailin”.

The Bailin Monastery surrounding the pagoda, was built in the second century CE, and called Guan Yin Monastery. Its most prominent abbot was the famous Chan master Zhaozhou (Joshu), who is well known for the Mu-koan. The temple was in ruin long before 1949. In 1988, Jing Hui was persuaded to take over the Hebei Buddhist Association, and start rebuilding Bailin Monastery. Jing Hui is a student and dharma successor of Hsu Yun, but has also adopted the Humanistic Buddhism of Taixu.

The seven story pagoda stands at a height of about 40 m, built on a stone foundation. The lower section of the pagoda is a brick sumeru pedestal, which features two rows of intricate carvings that include artwork of musicians, celestial guardians, animals, and peonies. The first story of this solid brick pagoda features a facade of doors and windows, as well as columns, rafters, and brackets. Above this are seven tiers of eaves. The design style of this Yuan Dynasty era pagoda follows the tradition of the Liao Dynasty and Jin Dynasty, which were Khitan and Jurchen dynasties that ruled northern China before Kublai Khan established the Yuan.

How to get to Bolin Temple

If you want to get out of the traffic and hassle of navigation, you can book a private tour package that includes visiting, dining and transfer from us. Our local guide and driver will escort you to Bolin Temple and most convenient way and take care of all the details. You just have to focus on the visiting.

Free of charge. Visitors can enter the temple only after they get their tickets at the south end of the square. The temple is closed at 4 pm.

Accommodation in the temple is divided into 10 yuan and 20 yuan, including three vegetarian meals