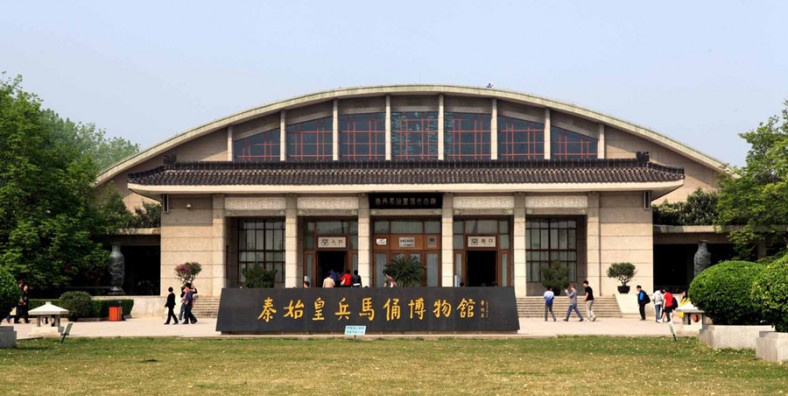 The Museum of Qin Terracotta Warriors and Horses, also known as the Terracotta Army, is located about 1.5 kilometers east of the Mausoleum of the First Qin Emperor and forms part of the extensive necropolis. There were more than a thousand terracotta soldiers unearthed here, each with a different facial expression. Standing before the massive underground army, you will feel the extraordinary might of the Qin Emperor that enabled him to unify six warring states two thousand years ago.

Why is Emperor Qinshihuang’s Mausoleum Site Museum So Special？

Emperor Qinshihuang’s Mausoleum Site Museum was built based on the Mausoleum of Emperor Qin Shi Huang, which was historically known as Lishan Garden and is the largest imperial tomb in China with the richest buried objects.

Located at the northern foot of Lishan Mountain, 35 kilometers northeast of Xi’an, Shaanxi Province, Qinshihuang Mausoleum is the tomb of Emperor Qinshihuang, founder of the first unified empire in Chinese history during the 3rd century BCE. Begun in 246 BCE the grave mound survives to a height of 51.3 meters within a rectangular, double-walled enclosure oriented north-south. Nearly 200 accompanying pits containing thousands of life-size terra cotta soldiers, terra cotta horses and bronze chariots and weapons – a world-renowned discovery – together with burial tombs and architectural remains total over 600 sites within the property area of 56.25 square kilometers. According to the historian Sima Qian (c. 145-95 BCE), workers from every province of the Empire toiled unceasingly until the death of the Emperor in 210 in order to construct a subterranean city within a gigantic mound.

Qin Shi Huang ( 秦始皇); 18 February 259 BC – 10 September 210 BC) was the founder of the Qin dynasty and was the first emperor of a unified China. He was born Ying Zheng (嬴政) or Zhao Zheng (趙政), a prince of the state of Qin. He became Zheng, the King of Qin (秦王政) when he was thirteen, then China’s first emperor when he was 38 after the Qin had conquered all of the other Warring States and unified all of China in 221 BC. Rather than maintain the title of “king” (王) borne by the previous Shang and Zhou rulers, he ruled as the First Emperor (始皇帝) of the Qin dynasty from 221 BC to 210 BC. His self-invented title “emperor” (皇帝), as indicated by his use of the word “First”, would continue to be borne by Chinese rulers for the next two millennia.

Buried deep under a hill in central China, surrounded by an underground moat, an emperor has lain undisturbed for more than two millennia. He is China’s first emperor, Qin Shi Huang, who died in 210 B.C. after conquering six warring states to create the first unified nation of China. Wanting protection in the afterlife, Emperor Qin created an army of 8,000 soldiers, 130 chariots with 520 horses, and 150 cavalry horses made of terracotta.

In 1974, some farmers happened to dig up what turned out to be a large-scale pit with terracotta soldiers and horses, belonging to the Emperor Qin. After 2,200 years, the Emperor’s tremendous army stood as though living again. The life-size terracotta solider they dug out of the ground turned out to be just one of an army of thousands, each utterly unique, with individual clothing, hair and facial features.

Museum of Terra-cotta Warriors and Horses

As a part of Emperor Qinshihuang’s Mausoleum Site Museum, the Museum of Terra-cotta Warriors and Horses is located 37 km (23 mi) east of Xi’an city. The pits of terra-cotta warriors and horses first discovered in 1974 were one of the biggest contemporary archeological discoveries. With large scale, great quantity, unsurpassed technique and artistic value, the museum has brightened every visitor’s eye since its opening. Every year, millions of visitors come here, including many heads of foreign states and governments. It is the most well-known name card of Xi’an City and the first temptation for visitors to enjoy in this city.

With an area of 226 hectares (about 558 acres), this site park of Emperor Qinshihuang’s Mausoleum Site Museum was opened to the public on October 1, 2010. It contains the tumulus of Qin Shi Huang Mausoleum, major architectural sites that have been discovered, ritual sacrifice pits, the Museum of Terracotta Acrobatics, Museum of Terracotta Civil Officials, Museum of Stone Armor and Museum of Bronze Chariot and Horse.

The site park means to protect the relics to the greatest extent as it laid over the past two thousand years. The archeologists have discovered the inner and outer wall of Qin Shi Huang’s tomb. Mausoleum Site ParkThe site is sealed by earth and the walls are marked on the ground by evergreen plants. Similar measures will be applied to other sites that have been discovered. The pit of Terracotta Civil Officials was first discovered in early 2000 in the southwest corner of the tumulus. Unlike other pits, this one wasn’t burnt. A small fraction of artifacts were excavated, including terra-cotta warriors, wooden chariot, weapons and horse skeletons.

The underground palace is the core of Qin Shi Huang s mausoleum. To answer the public concern if the underground palace would be opened, the curator of the site park once expressed his principles, protection and respect. Leave that exactly as it is, now and in the future, as we all hope there is one day that people can use advanced technology to see the underground clearly without disturbing the endless sleeping soul.

How to get to Qinshihuang’s Mausoleum Site Museum

If you want to get out of the traffic and hassle of navigation, you can book a private tour package that includes visiting, dining and transfer from us. Our local guide and driver will escort you to the Emperor Qinshihuang’s Mausoleum Site Museum in Xi’an in the fastest and most convenient way and take care of all the details. You just have to focus on the visiting.