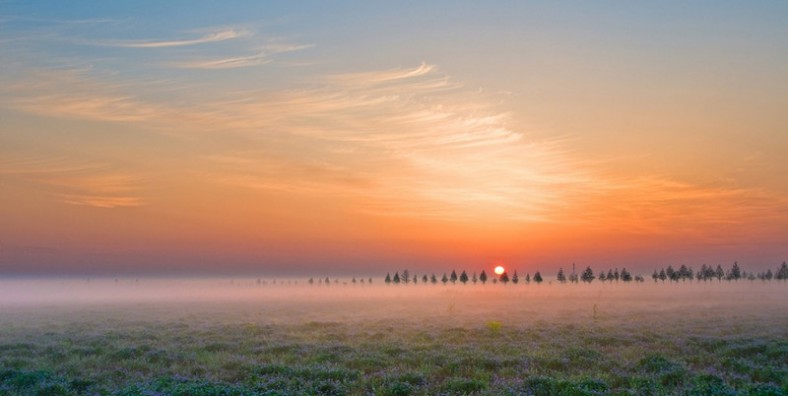 With flat terrain, fertile land and beautiful natural environment, Chongming Island is suitable for self-cultivation. Chongming Island continues to suffer from sediment accumulation in the Yangtze River, increasing 5 square kilometers of land every year, and is expected to border the northern land in 50 years' time

Why is Chongming Island so Special?

Chongming Island, the third largest island in China, is the backyard of Shanghai. The island is located at the eastern mouth of the Yangtze River. There is an embankment under the shade of trees. It looks like a huge green dragon lying on the river. Large-scale forests, lakes and wetlands will immerse you in the natural beauty of this place. You can find many things to do: explore the virgin forests in Dongping National Forest Park, observe birds in Pearl Lake, and enjoy the endless reed marshes in Wetland Park. Walking on the mudflat, you will encounter many crabs walking sideways. Mud flats are thickly dotted with crab holes. Therefore, Chongming Island is also called Crab Island. In addition to contact with nature, there are many historical scenic spots and cultural landscapes that expose you to cultural atmosphere, such as Chongming Academy, Danyuan, Shouan Temple and Hanshan Temple.

Where is Chongming Island?

Located in the Yangtze River Estuary, Chongming Island is the third largest island in China. Most of Chongming Island belongs to Shanghai. Most of the administrative districts on the island are Chongming District. A small part are Qilong Town and Haiyong Town in Jiangsu Province.

Dongping National Forest Park, located in the center of Chongming Island, is the largest man-made plain forest in eastern China, with lush trees and fragrant flowers. Thousands of migratory birds come to this park to breed every year. In addition to the dense forest, there are many recreational facilities, such as grass skiing, rock climbing, forest golf courses, tennis courts, forest zipper lines and forest sunbathing.

Dongtan Wetland Park is located at the easternmost end of the island. Tourists can enjoy the fresh air and seemingly endless reed marshes there. The seascape pavilion is built at the eastern end of the park. Many tourists will go there to watch the beautiful sunrise. The bird migration route in the Asia-Pacific region will pass through Dongtan Park from November to March. During that time, thousands of birds can be seen, including wild geese and egrets. There is an egret pavilion in the center of the park for tourists to observe birds.

Xisha Wetland Park is in the southwest of the island. The landform of this place is very rich: lakes, beaches, fresh water, reeds and marshes. The ebb and flow of the tide has diversified wetland animal species. Xisha Park is also the best place to watch the sunset on the island.

Pearl Lake, located in the west of Chongming Island, is the largest natural inland lake in the region, with a surface area of 4.3 square kilometers (1.7 square miles). There is a bridge full of flowers on the deck to lead tourists to the lake. Many rare trees are planted on the river bank. Walking along the woodland path, you will hear birds and insects singing and see butterflies flying around you, thus experiencing close contact with nature.

Hairy Crab: Although it is small sized, the meat is very tender. Usually a streamed dish, soup stewed with the crab meat is also very tasty.

Chongming Alcohol: Sticky rice is the main ingredient, adding herbs and water to brew. Different from other liquors, it tastes sweet and mellow, if slightly sour.