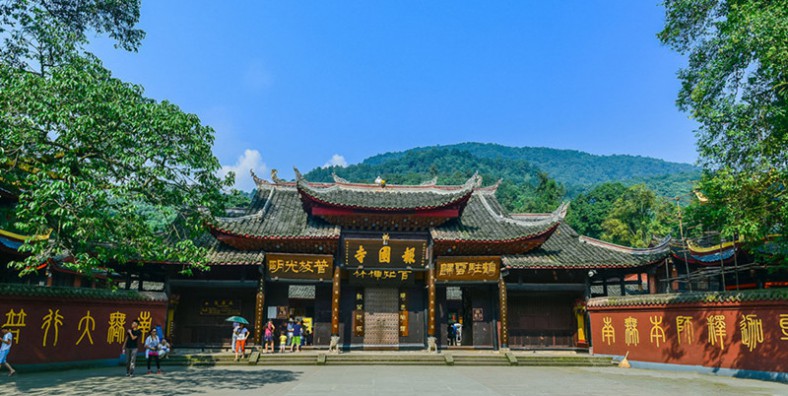 Why is Baoguo Temple So Special?

Baoguo Temple is a Buddhist temple located on Mount Emei, it is the center of Buddhist activities in Mt. Emei too. Baoguo Temple was originally called Huizong Hall when it was built during the Ming Dynasty (1368 to 1644), and was later renamed Baoguo Temple (报国寺) by Kangxi Emperor (康熙皇帝) in the Qing Dynasty (1644 to 1912).  Constructed in the 16th century, this temple (550m) features beautiful gardens of rare plants, as well as a 3.5m-high porcelain Buddha dating back to 1415.

Where is Baoguo Temple?

How to Get to Baoguo Temple

If you want to get rid of hustle of transportation and troublesome navigation, you can book a private tour package which covers visiting, dining and transfer from us. Our local tour guide and driver will escort you to Baoguo Temple with speed and convenience, and take care of all the details. You just need to focus on travel.

By Train: Take a train from Leshan Railway Station to Emeishan Station, and then transfer to bus to get here.
By Long-Distance Bus: Take a bus from Xiaoba Bus Station to Baoguo Temple Bus Station and then walk to the entrance. The bus departs once fully occupied from 07:30 to 18:00. Ticket fare is CNY11 and duration is about one hour.

In the temple there are five halls: the Gate, the Maitreya Hall, the Mahavira hall, the Seven Buddhist Hall and the Samantabhadra Hall. They are the most important and well visited ones.

The main gate is the entrance of the temple. The Chinese characters on the main gate Bao Guo Temple is named by Kangxi Emperor of Qiing Dynasty, and wrote by Yupan.

The first hall Maitreya Hall is filled with colored clay figure of Buddha Maitreya. The second one Sakyamuni Hall is the temple’s main hall filled with delicate artifacts; this is where the large golden Buddha Sakyamuni rests on his lotus-shaped throne, with figures of the eighteen disciples of the Buddha on the left and right wing-rooms.

Seven Buddhist Hall means the the hall of treasure. Seven Buddhas are enshrined in the temple, one of them is Sakyamuni, and the other six are Buddhas of the past.  The hall concentrates on the seven Buddhas, on the both sides wall has the Song Dynasty renowned writer, calligrapher Huang Tingjian’s four “Seven Buddha Brave” can be seen painted on a large wooden plaque.