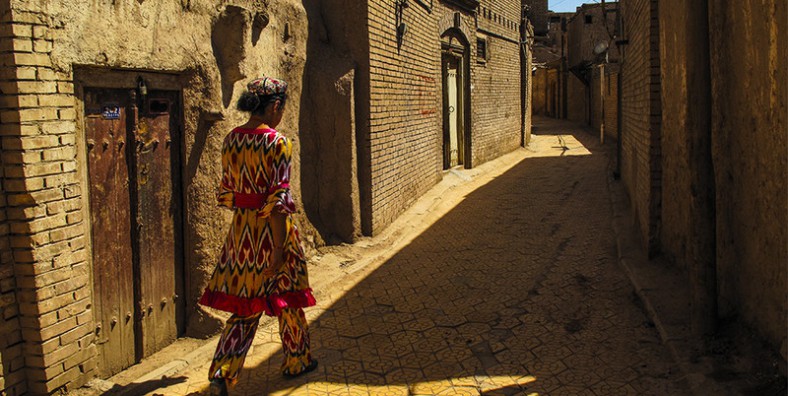 Influenced both by Eastern and Western cultures, the architecture of the Kashgar Old Town displays the charm of Central and Western Asia as well as elements of ancient Roman.

Why is Kashgar Old Town So Special?

Kashgar’s soul is in Kashgar Old Town, it represents the city’s past, and peaceful present, if lucky, it will represent the future. Kashgar city, formerly known as Shule, has 2000 years of history. The ancient city of Shule in Kashgar is located the south, and in the Tang dynasty government had set Shule town here, however, the relic site is in the Hanoyi Ancient City where is 20 km from east of Kashgar. Walking into the old streets, in the scope of about 2 square kilometers, 23000 residents live staggered and overlapped, 200 to 300 roadways crisscross.

Where is Kashgar Old Town

Kashgar Old Town used to be at the crossroads of the northern and southern branches of the Silk Road, near the western edge of the Taklamakan Desert.

Kashgar’s old city is located in the center of Kashgar city, with an area of 4.25 square kilometers and about 126,800 residents. The streets and lanes in the old city are criss-crossing and the layout is flexible and changeable.

A Huge Maze in Islamic and Uygur Style

Kashgar Old City is a unique maze city in China.  More than 200 narrow alleys crisscrossed.  If you get lost, you can use hexagonal tiles as guides to help you.  Tiles with four corners will lead you to a dead end.  Most of the buildings here are of Islamic and Uyghur styles.  It gives people a feeling of being in the Middle East.  The house in the core area makes it one of the largest adobe buildings in the world.  There is no end of mud walls and colored doors.  The town’s residents’ gates are open to tourists.  When both doors opened, the owner went home.  When a door panel is opened, the hostess is alone at home.  When the curtain was draped over the door, someone came to visit and the host was absorbed.  Although the local houses are not large, each has a courtyard.

Kashgar’s old city is the home of Uyghurs. You can see and feel Uyghur culture here: their festivals, costumes, songs and dances.  You can also taste many Xinjiang foods here, including shashi buns, baked steamed buns and a crisp cake called pumpkin pie.  Walking in the old city, you will find people’s life is very happy.  Handicraft workshops opened, old looms creaked, pottery was sold, and folk artists sang on narrow roads.  In addition, the influence of India, Arabia, ancient Greece and China is reflected in the housing style.  Many houses in the old city include Roman columns, Persian woodcuts, Buddhist lotus heaps, Indian plaster sculptures and Russian windows.、

Market is the “market” in Uyghur. Kashgar has always been the hub of the Silk Road and an international commercial center. Tourists can find many fairs in the old city. There is a commercial street called Erya Road, which contains a flower pot market, carpentry, medicine and hat markets. In addition, Kashgar’s old city also has a craft workshop street called Kumu Dalva Zha Lu, where Uygur folk musical instrument shops and Kashgar’s largest bronze ware shop can be found. Bronze ware is a treasure of Uyghur nationality and is regarded as a work of art. The old city of Kashgar also has handicrafts and supplies from many ethnic minorities such as Kazakhstan and Mongolia, as well as products from Turkey, Arabia, Kazakhstan and India.