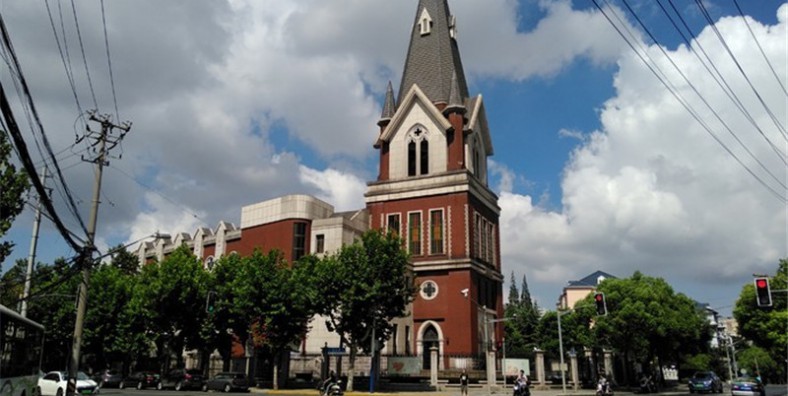 Jiangwan (江湾) Christ church, formerly the Episcopal  church of America, was once called Jiangwan St. Paul’s church. It has been nearly 150 years since it was rebuilt and its site changed several times.

In 1820, the Episcopal  church of the United States was founded. In May 1834, the Episcopal church was introduced to China. In July 1845, the Episcopal  church was spread to Shanghai by William Jones Boone. In 1868, the introduction of Episcopal  church to the Jiang wan(江湾) area . In 1873, the hall was built in the west of JiangwanXianghua(江湾香花) bridge for the first time .Chinese pastor Wu Hongyu(吴虹玉) presided over the land purchase and construction of the church, and named it St. Paul’s church, belonging to the Shanghai diocese of the Episcopal  church of America. In 1912, it was converted to the Chinese Anglican communion. In 1923, due to the increase in the number of believers, the original church could not accommodate, moved to Yangjiaqiao (杨家桥) to build a new church. In 1932, for the first time ,it was destroyed in the “January 28 Incident” and rebuilt afterwards. In 1937, the new hall was again destroyed by the Japanese “August 13 Incident”. After the victory of the war of resistance against Japanese aggression, it was moved to no. 3, lane 79, Hetan(河滩) west road and rebuilt. After completion, it was still named St. Paul hall and resumed church worship.
In 1950, responding to the “Three-self” reform movement , the St. Paul hall was joined the “Three-self” patriotic movement committee in 1954. In 1958, the church was forced to close for worship. Jiangwan(江湾)believers were merged into the Jinglin(景林) hall, to participate in joint worship. In 1966, the cultural revolution began and all religious activities ceased. In 1979, religious policy was reopened. Jiangwan is under  the jurisdiction of Baoshan county, while the original Hetan(河滩) west road old hall has been demolished and rebuilt houses, hard to recover. In April 1983, after consultation, Baoshan county government agreed to approve the document , which tells a house of about 30 square meters is allocated to no. 1374 north Xinshi(新市) road as a place of worship to establish Jiangwan meeting point.
In September 1984, the administrative region of Shanghai was adjusted，which says Jiangwan(江湾) town was put under the jurisdiction of Hongkou district, and Jiangwan meeting point was reorganized into jingling(景灵)  hall pastoral area of Hongkou district. In 2006, as the number of believers continued to grow, the two sessions of Hongkou(虹口) Christian decided to rebuild a church in the Jiangwan area. In September of the same year, construction began and completed in 2008. It was renamed “Jiangwan Christ church” and completed before Christmas of that year.

Xintang (新堂) architecture belongs to gothic style, the total area of 2953 square meters. Three floors above ground are places of worship, which can accommodate 1,500 people to worship at the same time, the negative floor is parking area. The first floor of the church is the auxiliary hall and multi-functional hall, and the main hall is located on the second floor, the third floor is used for the floor hall. The Roman Columns on both sides of the church are very pious and solemn, and each window is decorated with lead-colored glass, illustrating the connotation of relevant beliefs. The golden cross stands on the top of the bell tower. Before the worship, the eight-tone bell in the bell tower plays melodious holy music and spreads to all directions.

Activities and Time of Jiangwan Church

How to Get to Jiangwan Church

Other Famous Churches in Shanghai