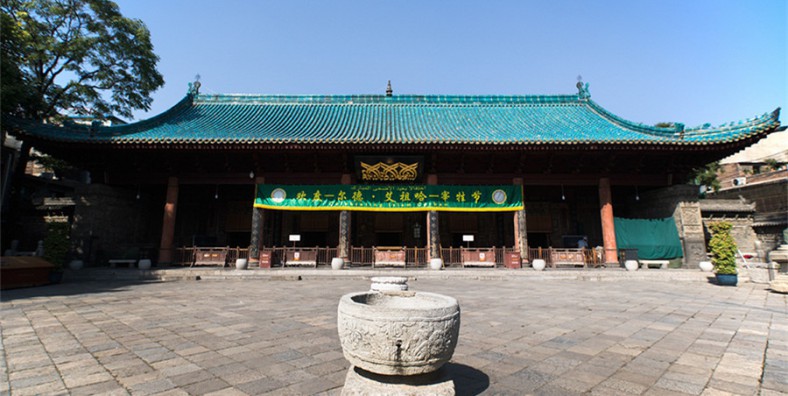 The Great Mosque of Xian, located near the Drum Tower, is one of the oldest and most renowned mosques in the country. Built in the Tang Dynasty (reign of Emperor Xuan Zong, 685-762), it still used by Chinese Muslims today as a place of worship.

Why is Xian Great Mosque So Special？

The Great Mosque of Xi’an (西安大清真寺) is the largest mosque in China. An active place of worship within Xi’an Muslim Quarter, this courtyard complex is also a popular tourist site. The majority of the mosque was built during the early Ming dynasty. It now houses more than twenty buildings in its five courtyards, and covers 12,000 square meters. The mosque is also known as the Huajue Mosque (化觉巷清真寺), for its location on 30 Huajue Lane. It is sometimes called the Great Eastern Mosque (东大寺), as well, because it sits east of another of Xi’an’s oldest mosques, Daxuexi Mosque (大学习巷清真寺).

Bigger than many temples in China, the Great Mosque is a gorgeous blend of Chinese and Islamic architecture and one of the most fascinating sacred sites in the land. The present buildings are mostly Ming and Qing, though the mosque was founded in the 8th century. Arab influences extend from the central minaret (cleverly disguised as a stumpy pagoda) to the enormous turquoise-roofed Prayer Hall (not open to visitors) at the back of the complex, dating to the Ming dynasty.

History of Great Mosque in Xian

In the Tang dynasty, Islam was introduced to China by the Arabian merchants. Many Muslims settled in China and married Han people. The Great Mosque was constructed at that time to honor the founders of Islam in China. Since then many other mosques have been erected across the county.

Great Mosque located toward the east, the entire mosque is a rectangle of east-west direction surrounded by a green brick wall, covering an area of about 18 acres. The mosque is divided into four courtyards along the east-west axis of the mosque; the total construction area is about 4000 square meters. The one characteristic of Great Mosque Xi’an is that it mixes together with the traditional Chinese architectural style and Islamic architecture style perfectly. In architectural style, it strongly represents the traditional Chinese architectural style, but the articles and decorations of internal mosque are strictly following Islamism.

Existing Great Mosque Xi’an belongs to the Ming and Qing architectural style, main body construction is halls, Shengxin building, the phoenix pavilion, etc. Inside the mosque there are hand-written copies of the Koran in the Qing dynasty and a picture “Mecca figure” that portrayed Islam holy land Mecca, and 20 inscriptions written Arabic and Chinese.

Best Time to Go to Great Mosque in Xian

It’s a beautiful place to visit in spring, as the white and pink magnolias burst into bloom; in the slow season, the mosque can also be a haven of solitude and an oasis of tranquillity in a very busy area of the city.

The first courtyard contains an elaborate wooden arch 9 meters (30 ft) high covered with glazed tiles that dates back to the 17th century. In the center of the second courtyard, a stone arch stands with two steles on both sides. On one stele is the script of a famous calligrapher named Mi Fu of the Song Dynasty; the other is from Dong Qichang, a calligrapher of the Ming Dynasty. Their calligraphy because of such elegant yet powerful characters is considered to be a great treasure in the art of handwriting.

At the entrance to the third courtyard is a hall that contains many steles from ancient times. As visitors enter this courtyard, they will see the Xingxin Tower, a place where Muslims come to attend prayer events. A ‘Phoenix’ placed in the fourth courtyard, the principal pavilion here, contains the Prayer Hall, the surrounding walls of which are covered with colored designs. This Hall can easily hold 1,000 people at a time and according to traditional custom, prayer services are held five times everyday respectively at dawn, noon, afternoon, dusk and night.

How to get to Great Mosque in Xian

If you want to get out of the traffic and hassle of navigation, you can book a private tour package that includes visiting, dining and transfer from us. Our local guide and driver will escort you to the Great Mosque in Xi’an in the fastest and most convenient way and take care of all the details. You just have to focus on the visiting.