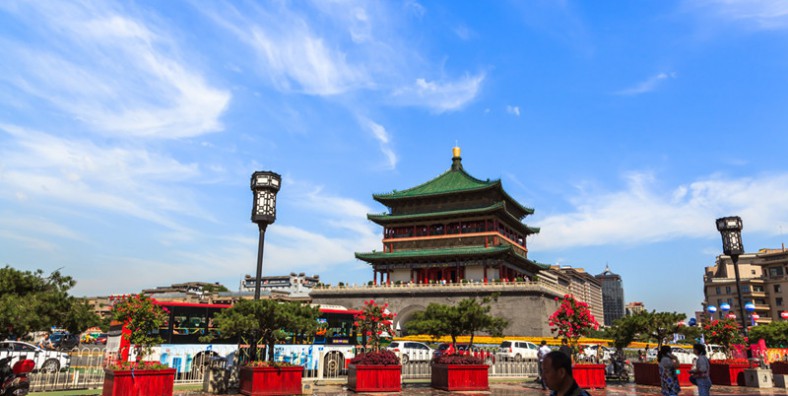 The Bell Tower of Xi'an, built in 1384 during the early Ming Dynasty, is a symbol of the city of Xi'an and one of the grandest of its kind in China. The Bell Tower also contains several large bronze-cast bells from the Tang Dynasty. The tower base is square and it covers an area of 1,377 m2 (14,820 sq ft). The tower is a brick and timber structure and close to 40 m (130 ft) high. It is located in the center of Xi'an, at the intersection of the four streets of the east, west, south and north.

Address: at the city center of Xi'an, Shaanxi Province.

Why is Xi’an Bell Tower So Special？

Brief Introduction of The Bell Tower

The Bell Tower of Xi’an (西安钟楼), built in 1384 during the early Ming Dynasty, is a symbol of the city of Xi’an and one of the grandest of its kind in China. It is a stately traditional building, that marks the geographical center of the ancient capital. From this important landmark extend East, South, West and North Streets, connecting the tower to the East, South, West and North Gates of the City Wall of the Ming Dynasty.

The wooden tower, which is the largest and best-preserved of its kind in China, is 36 meters (118 feet) high. It stands on a brick base 35.5 meters (116.4 feet) long and 8.6 meters (28.2 feet) high on each side. During the Ming Dynasty, Xi’an was an important military town in Northwest China, a fact that is reflected in the size and historic significance.

The tower was built in 1384 by Emperor Zhu Yuanzhang as a way to dominate the surrounding countryside and provide early warning of attack by rival rulers.

Many legends of this tower gain a mysterious color to this old structure. One of the legends is related to the Chinese totem – dragon. It is said that during the Ming Dynasty, Guanzhong area had experienced earthquakes. Many citizens were injured and they had found the reason of these frequent earthquakes. It was the dragon in the river which was flowing across the center of Xian city. In order to lock the dragon, the Bell Tower was built by the government. One of the officials believed that this tower could suppress the dragon firmly and bring the happiness to the city. And just as he thought, earthquake did not occur in Xi’an again.

Architectural Features of the Bell Tower

Standing on a quadrate brick-wood-structured pedestal, the 36-meter tall (118 feet) Xi’an Bell Tower is 35.5 meters (116 feet) long at each side and is crowned by three-layer eaves, and a winding staircase leads you to the top of the tower inside. The Bell Tower is resplendent and magnificent, on the top of which stands a gilded bottle-shaped ornament which shines brightly in the sun. A 6-meter (20 feet) tall arched gate opens in the west, east, north and south sides respectively, through which all traffic passes.

Dark-green glazed tiles decorate the eaves of the tower, with the carved beams and painted rafters being adorned in a royal style. The windows are delicately decorated with bass-reliefs, and each bass-relief tells a historical story.

A replica of the original Jingyun Bell. The original was made over 1000 years ago during the time of the Tang dynasty. Today, it sits in the Xi’an Forest of Stone Tablets Museum, where visitors are able to look at a true piece of Chinese history.

However, due to its significance in relation to the Bell Tower in Xi’an, a replica was requisitioned in order to sit in the Bell Tower itself. It is believed that if you are given the chance to ring the bell, you will be extremely lucky.

Located on the first floor of the building, you’ll find three Steles inscribed with the history of the tower.

If you would like to visit the Bell Tower’s performance, it takes place 6 times a day and costs 20 CNY per person. You can look around the Bell Tower first and buy tickets in advance. The performance is worth being seen.

Throughout the year, Folk Concerts have been known to be organized for the general public and visitors. Whilst the times for these vary, they tend to reside around the time of the national festivals such as Spring Festival. Locals get heavily involved in the festivals and they are big events. The Tang West Market Spring Festival Fair is a good example of a fair in the local area and worth visiting if your trip coincides with it.

Located near to the Bell Tower, the North Gate Night market is the perfect place to get involved in Xi’an snacks, trinkets, and souvenirs. You can find practically anything you could possibly want here. It’s highly recommended that you sample many of the different streets foods on offer here – especially if you haven’t tried local Xi’an cuisine. It’s some of the best food you’ll find in China, and it’s cheap!

Show Time of the Performance at Bell Tower

How to get to Drum Tower

If you want to get out of the traffic and hassle of navigation, you can book a private tour package that includes visiting, dining and transfer from us. Our local guide and driver will escort you to the Bell Tower in Xi’an in the fastest and most convenient way and take care of all the details. You just have to focus on the visiting.