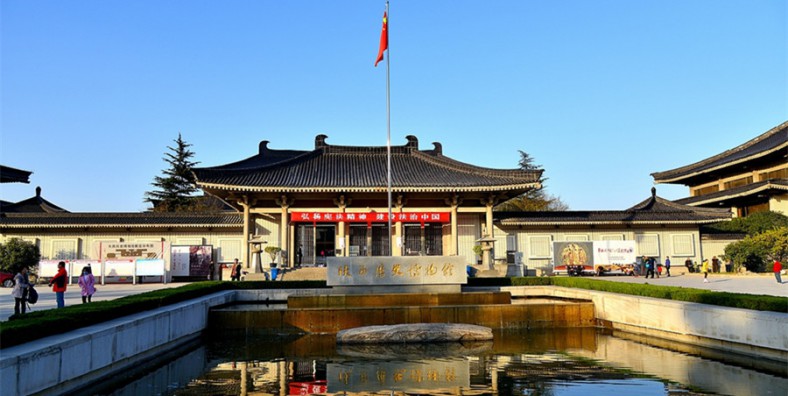 The Shaanxi History Museum is a good place to learn about ancient Chinese civilization. The museum houses bronze artifacts from the Shang and Zhou dynasties, gold and silver artifacts of the Han and Tang dynasties, and Tang dynasty murals, of which a large portion of them are treasures of the Han and Tang period. The Beast-Head-Shaped Agate Cup, the Silver Pot with Design of A Horse Dancing and Holding A Cup in Its Mouth, and the “Huang Hou Zhi Xi” are cultural artifacts that the country has prohibited from leaving the country and can only be seen in the Shaanxi History Museum.

Ticket: Free for Most Exhibition Halls

Why is Shaanxi History Museum So Special?

Shaanxi was an important province in China’s imperial past. Xi’an served as the capital of China for 13 dynasties over 1,100 years, from 221 BC to 904 AD. It was the seat of China’s first imperial civilization.

Xi’an, a place of great significance in Chinese history, is well-endowed with historical sites and relics. Now most of these relics, once scattered around the region, have found their way to Shaanxi Provincial Museum.

Situated on Xiaozhai East Road on the northwest side of Giant Wild Goose Pagoda, the Shaanxi History Museum is the first modern national museum. It was built in 1983 and opened to the public in 1991. Shaanxi History Museum covers 65,000 square meters (16 acres), of which 11,000 square meters (207 acres) belong to the exhibition halls and 8,000 square meters (about 2 acres) are used as warehouses for storing relics. Now 370,000 exhibits in the museum vividly show the history of over a million years from prehistoric times (1,150,000 years ago – 21st Century BC) to about 1840 AD.

The museum houses over 370,000 items, including murals, paintings, pottery, coins, as well as bronze, gold, and silver objects. The modern museum was built between 1983 and 2001 and its appearance recalls the architectural style of the Tang Dynasty.

While designing the buildings in Shaanxi History Museum, the great designer used traditional palace construction of Tang Dynasty for reference. Adopting symmetry axis layout with obvious principal and subordinate buildings in order and four worship halls around, the complex architectures show the charming presence of prosperous Tang Dynasty. The predominant colors of the buildings are white, grey and black which create an atmosphere of solemnity.

It shows the history of Prehistoric Times (1,150,000 years ago – 21st Century BC), Western Zhou (1046 – 771 BC) and Qin Dynasty (221 BC-206 BC). Different original cultures are mainly shown in prehistoric times. In the Western Zhou and Qin Dynasty areas, the origin and arising of these two dynasties are covered.

It covers the history of the Tang Dynasty and later years. The Tang Dynasty was the heyday of China and Shaanxi Province; so many different kinds of relics covering almost all aspects are shown in this section. You can see splendid gold and silver articles, tri-color glazed pottery, and articles related to the Silk Road in this hall. After the Tang Dynasty, although Xi’an lost its position as the capital city of China, it was still an important place. There are many relics that show its continuing importance.

Besides, another exhibition hall, focusing on 5 pieces of Tang Murals and stone coffins from Jingling Mausoleum, was open to the public in 2013 in Shaanxi History Museum. Jingling Mausoleum is the tomb of Zhenshun Empress of Emperor Xuanzong during the Tang Dynasty (618-907), Lilongji. The coffin from her tomb, formed by 31 pieces of beautifully carved stones, weighs 27 tons and is about 2.5 meters long.  It looks like a small stone palace. It is currently the biggest and best preserved coffin among the more than 20 unearthed coffins from the Tang Dynasty.

Tang Dynasty is the most powerful dynasty in China’s history and gold ware, silver wares and jade articles are the symbol of Tang Dynasty. In 1970, more than 1,000 relics were discovered in Hejia Village in Shaanxi and they are exhibited in Shaanxi History Museum. These exhibits attract a mass of history-enthusiasts with its high quality, ample variety and good protection.

How to Plan a Xi’an Tour

Xian has a lot of places to visit. Terracotta Warriors and Horses is definitely the No.1 must-see. After that, take a stroll or rent a bike on the Ancient City Wall, the largest and best-preserved ancient city wall in China, to enjoy panoramic views of modern Xi’an. Then try some local snacks at the bustling and lively Muslim Quarter. On the next day, you can go to visit Da Cien Temple and Giant Wild Goose Pagoda to feel the Buddhist culture, then get a deeper understanding of the past of this city in Shaanxi History Museum. If you are interested in mountain climbing, don’t miss the challenging Mount Huashan which is famous for lofty peaks and steep paths. If you have other ideas or questions about a Xian tour, please feel free to contact us. We are also specialized in customized tours according to your own requirements, interests, travelling budgets, etc.

How to get to Shaanxi History Museum

If you want to get out of the traffic and hassle of navigation, you can book a private tour package that includes visiting, dining and transfer from us. Our local guide and driver will escort you to the Shaanxi History Museum in the fastest and most convenient way and take care of all the details. You just have to focus on the visiting.