Naxi Dongba Cultural Museum, featuring Dongba Culture. Here we can see all kinds of pictures and texts about Dongba culture, as well as material materials such as scriptures, paintings, sacrificial rituals, as well as ancient production and living appliances of Naxi nationality, which is one of the most worth seeing museums in Yunnan Province.

Dongba Village is within the Yushui Village Scenic Area that is a Naxi theme park with a museum, gardens, ponds, and a stream. There are a few old Naxi teachers teaching about the ancient Naxi hieroglyphic writing system, the Naxi religious system called Dongba, and Naxi culture and history. The Naxi people in the region lived in a number of towns and participated in the regional and international trade of the Chama Road that is also called the Southern Silk Road. In exchange for tea (cha in Chinese pinyin), silk and other products from the Yunnan region and the rest of China, the Chinese imported horses (in Chinese) and other things from Tibet. So the trade route was called the Chama Road. In this area, the Naxi people who had their own distinct language developed a complex writing system of their own using hieroglyphics instead of Chinese characters. They used this writing system to transmit their religious beliefs, history, and legends. During this visit to this combination of school, museum and little theme park, visitors can gain an appreciation of this ancient culture that is almost extinct. 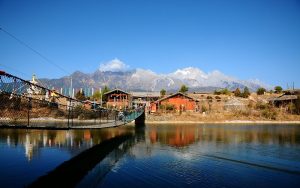 The Dongba Village site isn’t well known, but it might be one of the best places to go in the Lijiang area to learn about Naxi culture and writing. This is because there are old teachers there who teach the old language to a few students. There is also a museum. However, despite its name, it isn’t an old Naxi Village. It is a new theme park. People interested in learning about the Naxi culture may also want to visit Joseph Rock’s old residence in nearby Yuhu Village. Joseph Rock (1884 – 1962) was an Austrian-American botanist, linguist and explorer who lived in the area for a long time early in the last century and who put together a Dongba language dictionary.
Another good point of a trip to Dongba Village is the special Yushui Village Scenic Area that is rated 4A in China. The theme park area stretches about half a kilometer by 300 meters. There are gardens, some natural parkland, ponds, and a spring. The spring is reputed to have very pure water, and it is said that Joseph Rock liked to drink the water from the spring.

Naxi culture is special because the people are less modernized and the people developed a writing system, a music style, and a religion different than the majority of Chinese. The Naxi people created a unique and distinctive ethnic culture. Perhaps some of the distinctiveness arose from the wide-ranging contact that the Naxi had with other Asian cultures. The Naxi developed two writing systems. They had a phonetic system called Geba. They also developed a hieroglyphic (pictorial) writing system that is said to be the world’s sole surviving hieroglyphic writing system. Hieroglyphs were used in China and Egypt millennia ago. The ancient Maya had such as system, and more recently the people of Easter Island used such a system of writing. However, these other civilizations died out. The Naxi Dongba writing system almost died out too. After 1949, the Communist government attempted to eradicate both their religion and their writing systems. However, about 30 old Naxi still can read the remaining old manuscripts. There is now an attempt to preserve and teach the system of writing that is said to be beautiful and poetic, and younger people are learning the language at the Dongba Village site.

About the Dongba Culture and Naxi People 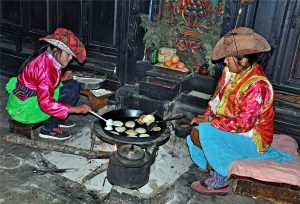 The Naxi People, or Naxi National Minority, is a minority with a long history and excellent culture. They mainly live in Yulong Naxi Autonomous County, Yunnan Province. With a population of a little more than 3000,000, the Naxi group has been worldwide known for its own prominent and unique Dongba culture. That’s like a miracle that such a small ethnic minority created magnificent culture.

Dongba Culture actually is the culture of the Naxi People because Dongba Religion is the main religion believed by them. The culture is mainly about the language and sculpture, or architecture. There are over 1,400 picture-like characters and symbols in Dongba literature that are still used by nowadays, which makes great contributions to the culture study of mankind and the publicity of Lijiang City. On August 30, 2003, the Dongba classical literature was listed as a written world heritage by UNESCO.

The Dongbaism believers mainly worship the great nature and the ancestors of nation, and sometimes also worship the ghost and spirit. The priests of Dongba are the most important inheritors of Dongba culture. Every one of them was a wizard, doctor, painter, scholar, musician and craftsman simultaneously. The etiquettes and religious rites of the Naxi people are omnipresent and diversified as many as about 30 kinds of forms. In the historical changes, the thoughts and religious traditions of Dongba culture have already seeped to Naxi people’s daily life at each aspect, especially at the heaven worshipping ceremony, the traditional wedding and funeral. 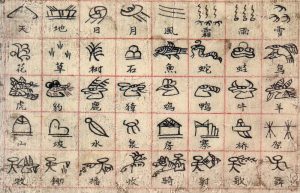 The Dongba characters, also named Naxi pictographic characters, is one of the oldest hieroglyphics and the only hieroglyphic writing with complete system in the world. There are all together around 1500 commonly used graphics and text, which are beautiful in forms and structures. The more than 20,000 scriptures of Dongbaism are written in Dongba characters, with contents about philosophy, history, religion, medicine and art. Therefore, the scriptures are regarded as the encyclopaedia of Naxi. The translations of various languages are also kept in the museums and libraries of 17 countries and regions.

The current situation of Dongba culture makes people worried. Since ancient times, Lijiang has been the cradle of Naxi Dongba culture. Other Naxi areas include Northwest Yunnan, Southwest Sichuan and Southeast Tibet. Unfortunately, the Dongba traditions in Lijiang are impacted greatly by the modern development and are nearly instinct. Except a handful of experts and scholars, and a few Dongba elders, most people know very little about the Dongba culture. It only exists in the museum and library now.

The Naxi people are a Tibetan-Burmese people. People say that perhaps the Naxi settlers around Lijiang were driven south to the area by the Mongol tribesmen who conquered China. The Mongols founded the Yuan Dynasty in the year 1271. The Naxi towns were astride the Chama trade route, so they had contact with people who passed through including the Tibetans, the Hans, and the Bais who lived in the Dali area. Baisha Town about 6 kilometers to the south of the theme park was one of the major old towns.
There are now about 200,000 Naxi people living in Lijiang County. They live in other places too. About 300,000 people still speak the Naxi language in China. In the 1960s and 1970s, the government tried to eradicate their religion, traditions and writing system. Thousands of documents were destroyed. By the late 1990s, only some old people could read and write their language. 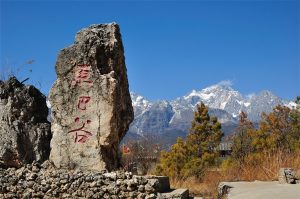 In 1997, UNESCO put three districts in Lijiang on their World Heritage List. Baisha Town just to the south of the Dongba Village area is one of the special districts. UNESCO explained that the three ancient towns of the Naxi are important to preserve because they are in a dramatic landscape where the cultures of the different peoples blended to “produce an urban landscape of outstanding quality” over many centuries. The towns were a key commercial and strategic site.
After 1997, the city of Lijiang became a major tourist attraction in China drawing millions of visitors annually. People came to see the Naxi people and the old districts. For foreign tourists and foreigners living in China, the county of Lijiang became popular as a hiking area with spectacular natural scenery and accommodations available at a variety of hostels, hotels, and inns. Tiger Leaping Gorge became known as one of China’s best hiking places.
The J.W.V. company built the Yushui Village theme park in 2001. In 2006, it was designated as a State-4A scenic attraction. Now there are about 10 students learning the language, and musicians play Naxi music there.

What to see in the Dongba Culture Museum?

The museum was built mainly in accordance to the Naxi People’s house, which is in quadrangle courtyard style. The Naxi group made full use of the unique landform and environment, from north to south, created various residential houses in different time.

There are over 12,000 historic relics in the Dongba Culture Museum, including paintings, holy books, sacrifice tools and etc.
Naxi People’s life and customs: You can approach the local people and know their life, and all their traditional habits or festivals.

How to get to Dongba Culture Museum

First of all, you need to get to Lijiang, and then you can take bus there.

There are fights linking Lijiang and Kunming, and also direct flight from Shanghai to Lijiang. For a detailed schedule and fares of the flights, refer to the table at the bottom of the page. In peak season, there are be extra flights and schedules may alter accordingly.

Lijiang airport is a fair distance from the city center, about 28km east. There is a RMB20 road tax to the airport, and a taxi to the airport takes about 40 minutes and costs about RMB75-80.

There is no public bus to or from the airport. Upon arrival, there are a few transfer services to the city but the service is very unreliable. From the city, an infrequent airport shuttle bus leaves from the Guanfang Hotel. The best thing to do is to check with the hotel and the airport about up to date public transport information.

The biggest bus station is at the Intersection of Mains Lu and Changshui Lu. The main bus station has both Gaokuai (express) and normal buses.

Normal buses to Kunming are usually night sleepers, there are several of these and the trip costs RMB115 and takes 10 Hours.

Mini buses to Zhongdian are available. There is one bus an hour between 7am and 3PM.

There are smaller bus stations in the town: among these, the biggest is at the old Guluwan Hotel on the northern end of Xindajie, opposite Mao’s square. From here buses run to Zhongdian, Qiaotou and Shigu. Buses to Dali and Kunming can also be found here.

The other sub-stations are at the Yuquan Hotel (Jade Spring) and The Lijiang Hotel.

There is an express bus station (for fast buses only) on Shangri-la Dadao opposite the Guanguang Hotel (Tel: 5183758).

1. If interested, you can taste Naxi food in the restaurant of Dongba Museum.

2. The Black Dragon Pool nearby is an extreamly beautiful scenic spot that you should not miss.