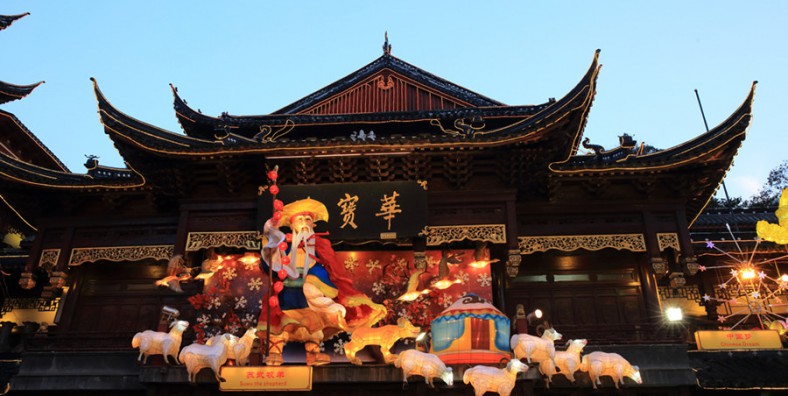 The City God Temple of Shanghai is located in the Chenghuangmiao Tourist Area in Shanghai. It is an important Taoist Temple in Shanghai and has a history of nearly 600 years. The "City God Temple" signboard is hung on the entrance to the main hall, while famous Han Dynasty general Huo Guang, Celebrity of Yuan Dynasty Qin Yubo and Opium War Hero Chen Huacheng are worshipped inside. There has been a constant flow of visitors to the temple as praying for peace here is known to be auspicious.
English Name:
Old City God Temple of Shanghai
Chinese Name: 上海城隍庙
Recommended Visiting Time: 1 or 2 hours
Opening Hours: Weekdays: 08:30-16:30, the first day of the lunar calendar, fifteen: 05:00-16:30
Tickets: 50Yuan/Person
Address:No. 249 Fangbin Middle Road, Huangpu District

The City God Temple or Temple of the City Gods (simplified Chinese: 上海城隍庙; traditional Chinese: 上海城隍廟; pinyin: Shànghǎi Chénghuángmiào; Shanghainese: Zånhae Senwonmioh), officially the City Temple of Shanghai, is a folk temple located in the old city of Shanghai. It commemorates the elevation of Shanghai to municipal status and is the site of the veneration of three Chinese figures honored as the city gods of the town. It is also known by some locals as the “Old City God Temple”, in reference to a later “New City God Temple” which no longer exists.
In Chinese, “Chenghuangmiao” is also used as the name of the commercial district near the temple. This is generally known in English as Yu Garden, after a nearby Chinese garden. The district is now incorporated under the name Yuyuan Tourist Mart.

Regardless of size, many walled cities in ancient China contained a temple dedicated to one or more immortal or god as the spirit(s) or protector(s) of the city.The City God Temple in Shanghai originated as the Jinshan God Temple, dedicated to the spirit of Jinshan, or “Gold Mountain”, an island off the coast of Shanghai. It was converted into a City God Temple in 1403, during the Yongle era of the Ming dynasty.

During the Qing Dynasty, the temple grew popular. Residents of the old city as well as nearby areas visited the temple to pray for good fortune and peace. The temple reached its largest extent in the Daoguang era. The popularity of the temple also led to many businesses being set up in the area, turning the surrounding streets into a busy marketplace.
During the Cultural Revolution, the temple was closed down and used for other purposes. For many years, the main hall was used as a jewellry shop.

In 1951, the Board of Trustees of the City God Temple was dissolved, and the temple was handed over to the Shanghai Taoist Association and made into a Taoist center. The institution made changes to the temple, removing statues representing folk underworld personalities such as Yama, the judge of the dead, and placing an emphasis on Taoist spirituality instead.
In 1994, the temple was restored to its former use as a temple, with resident Taoist priests. The Temple, together with nearby Yuyuan Garden and the surrounding streets, are now part of a large pedestrian zone dedicated to restaurants and retail.
A complete restoration of the City God Temple took place between 2005 and 2006. In October 2006 the place of worship was reopened and reconsecrated by Taoist clergymen.

The temple had an area of more than 10,000 square meters including two gardens: West Garden (Yuyuan Garden) and East Garden. The City God Temple has a great influence on the residents of Shanghai. The religious festivals of the temple are considered to be the festivals for all Shanghai people.

Especially when the Sanxun festival (a day when the City God start to inspect his people) comes, nearly all people will come to the Temple to burn incense and worship the God, while all shops inside or close by would hang red lanterns to celebrate the festival. In addition, some folk arts, like cockfight, penmanship performance and acrobatics, are fairly attractive.

Perhaps City God Temple of shanghai attracts the visitors with all kinds of tasty snacks around rather than the statues of immortals inside. There is a big snack square next to the temple. Hundreds of the local snacks and great treat to the taste sense are right here to tempt visitors who want to probe into the real Shanghai gourmet. The most famous snack shop at City God Temple snack square is Nanxiang Steamed Bun Restaurant around which there is always a long queue.

The temple is dedicated to three city gods:

Other Famous Attractions in Shanghai

One thought on “Old City God Temple of Shanghai”