An overwhelming variety of local snacks could be found in China. One thing about Chinese snacks is that they are mostly healthy and natural than regular sweets, chocolates and chips. In the Chinese language, we refer to snack as Xiǎochī. They’re practically universal in China, popular across age groups and demographics, so you’re bound to enjoy at least a few (if not all!) of them. They are often sold in small shops on the backstreets or at mobile roadside stalls. This page will introduce you some of the famous snacks in China. 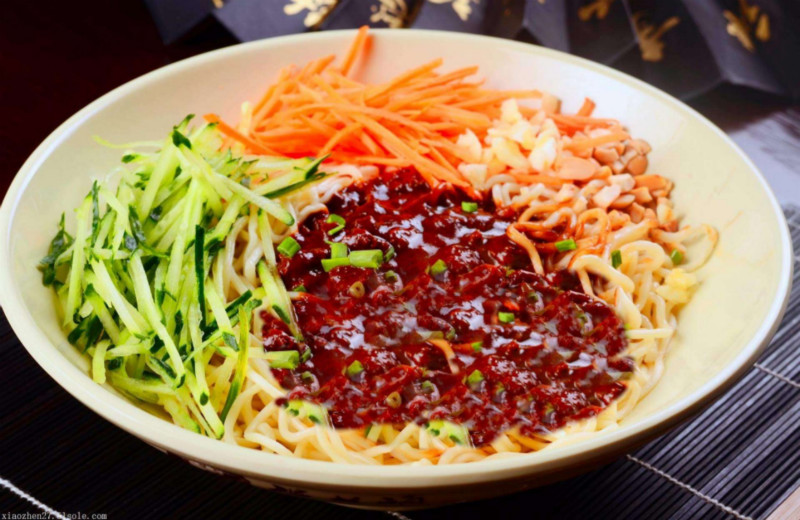 A dish of perfectly chewy noodles with a rich, meaty sauce. Also called Zha Jiang Mian (炸酱面), it is so famous in China that the mere mention of it immediately makes people think of Beijing. It’s sold everywhere—from street vendors to restaurants in five star hotels, and the price ranging from 10RMB to 100RMB.

The sweet bean sauce is slowly cooked with onion and pork to create an appetizing and mouthwatering savory sauce. Add a spoonful of sauce to the noodles and gently mix them; you will smell the pungent aroma and be unable to resist picking up the chopsticks and digging in. 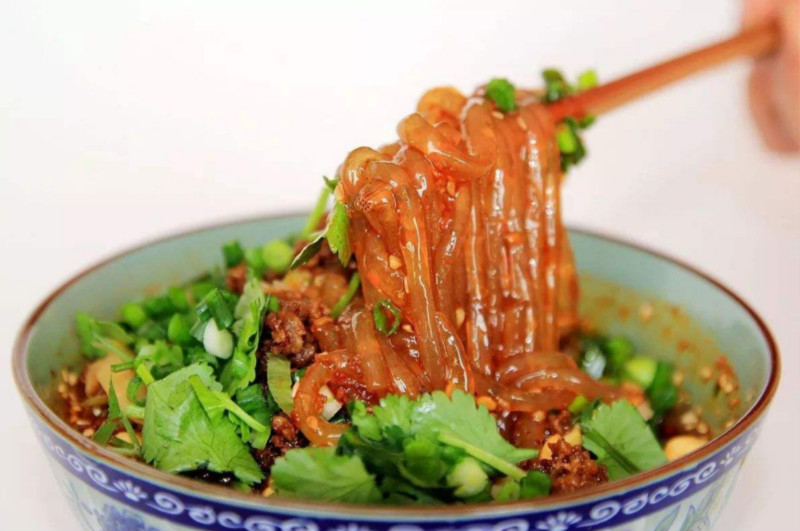 Hot and sour sweet potato noodles (Suan La Fen) is one of the most famous Chongqing street foods, which you can buy almost in every city of China. It is featured by its spicy and sour taste as well as the numbing feeling.  On Chinese food streets especially in Chongqing, this noodles can be served with fried minced pork sauce, red-braised beef and red-braised large intestines.

The noodles used for this snack is thick sweet potato noodles, which is much chewier than common noodles, soft and slippery. A bowl of red hot slurping goodness. 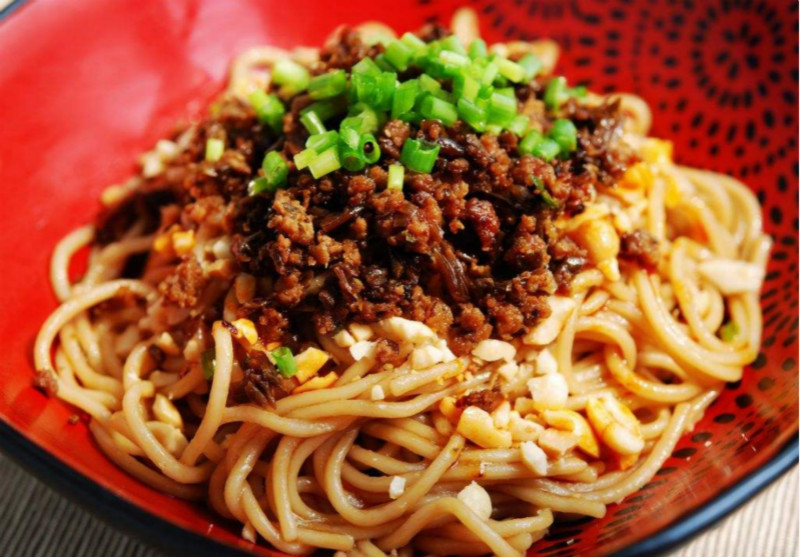 Dan Dan Noodles, otherwise known as Dan Dan Mian, originate from Sichuan, China, and it has since become popular all over the world. It consists of a spicy sauce usually containing preserved vegetables (often including zha cai (榨菜), lower enlarged mustard stems, or ya cai (芽菜), upper mustard stems), chili oil, Sichuan pepper, minced pork, and scallions served over noodles. The dish can either be served dry or as a noodle soup. 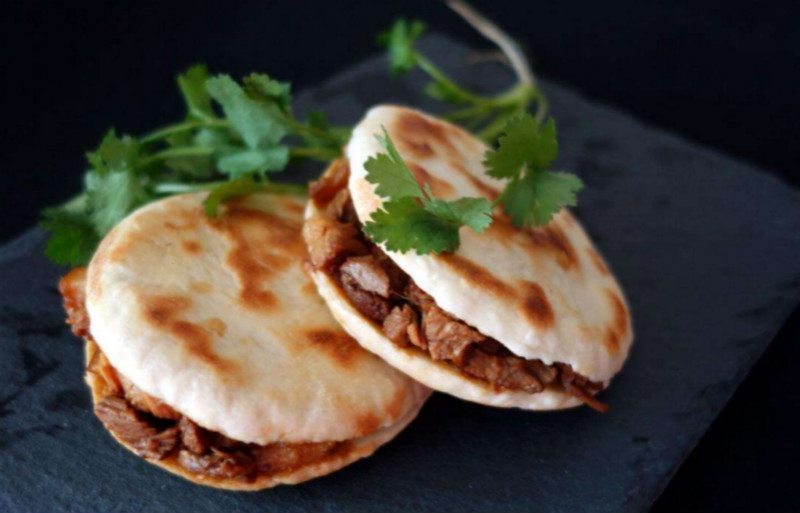 This is the first food you should think about trying when visiting Xian. Often labeled as the world’s first burger, Rou-jia-mo was first made about 2500 years ago, originating from the cuisine of Shaanxi Province and now widely consumed all over China.

The handmade bread is crispy on the outside and soft inside, and then stuffed with tender fatty pork, stewed for hours in a soup containing over 20 spices and seasonings. In Muslim areas in Xi’an, the meat is usually beef. 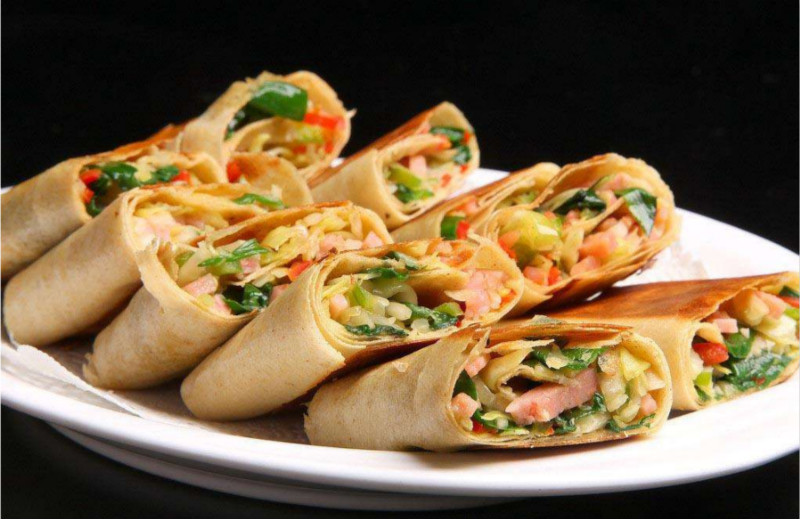 Jianbing is one of China’s most popular street breakfasts. And while all manner of Chinese buns and dumplings have spread well beyond the country’s borders, it also might be China’s best-kept culinary secret. The savory crisp-fried crepes are all about bold contrasts of flavor and texture: eggs, spread over the surface of the flour pancake as it cooks.

The raw materials of Shandong pancake are finely ground from whole grains, which are neither pure refined grains nor pure coarse grains. They are nutritious and easy for people to digest, because the raw materials of pancake are all with husks and contain much crude fiber, which is very helpful for digestion. 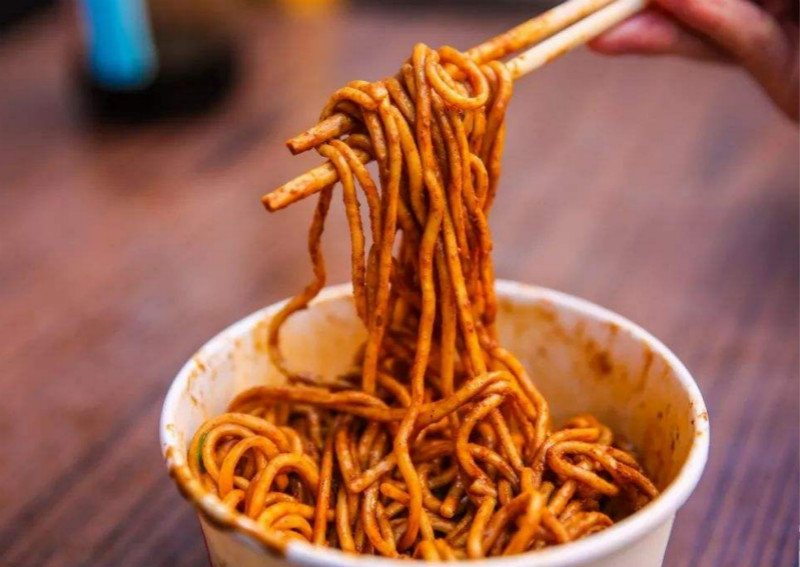 Hot Dry Noodles has a history in Chinese food culture for 80 years, and it is unique because the noodles are not in soup like most other Asian style noodles. It is the most significant, famous and popular breakfast food in Wuhan, often sold in street carts and restaurants in residential and business areas. 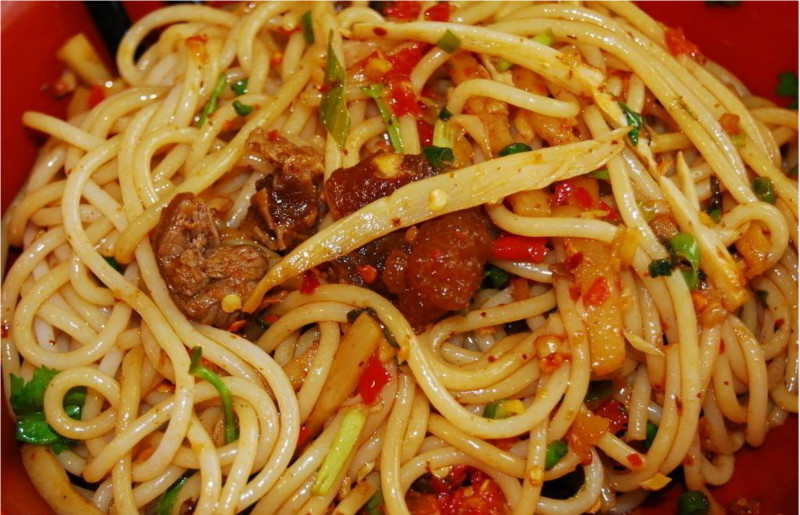 Guilin Rice Noodle can be taken as the fourth treasure in Guilin, which have been served around Guangxi Province since the Qin Dynasty. And to this day it remains a powerhouse of local cuisine. From construction workers to little Chinese infants, Guilin noodles are loved and offer the ultimate in culinary satisfaction.

Beside the rice noodle, there are various materials putting into this food, voluptuous gravy, fried peanuts or soybeans, scallions and thin slides of different kinds of meat such as beef, horse meat, and pork. You can also add some spice and chili in the rice noodles. 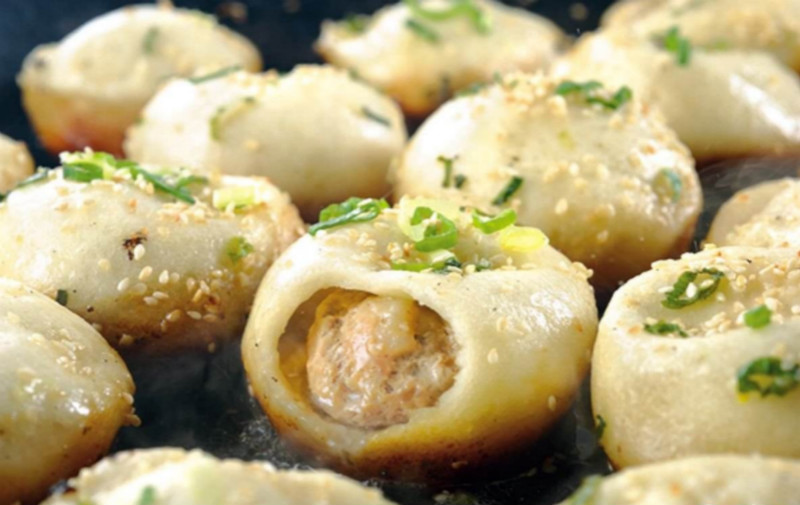 Like many modern cities, Shanghai is full of wonderful choices when it comes to food. Sheng Jian Bao (aka Sheng Jian Mantou, 生煎馒头) is a type of Chinese bun which is fried then steamed in a flat pan. The wrapper is made from yeast dough and the filling contains minced pork, spring onion and various seasonings.

In Shanghai, pan-fried pork buns are traditionally served as breakfast at little cafes and street stalls. The wrapper has a lovely soft texture with a golden, crispy base . The filling is very flavoursome and moist. 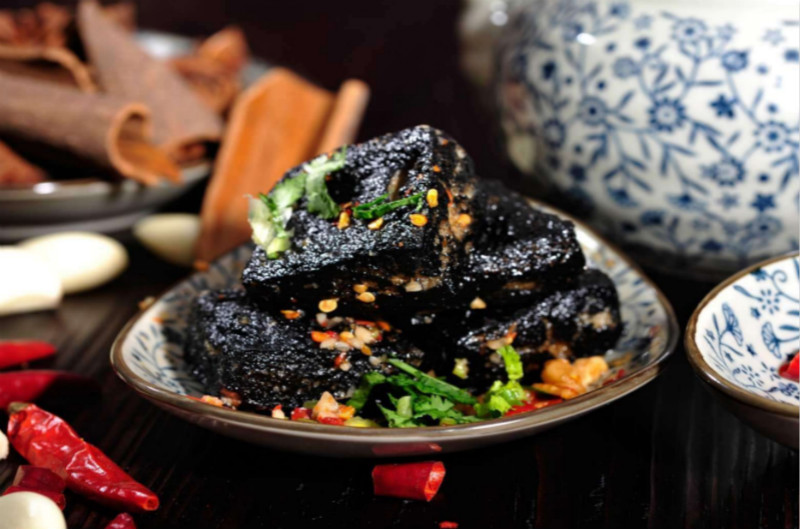 Traditional Stinky Tofu is most famous in Changsha, Hunan. It is made from fine soybeans and then soaked in a brine containing bamboo shoots, shiitake mushrooms, koji, and soybean meal. Stinky Tofu is gray, however, as it ferments, white fuzz will form on the surface. At first, you can really smell the stinky odor as you fry it in a pan, until the color darkens, and after the surface has swelled, you can remove it. When you pour the garlic paste, pepper, and sesame oil over the tofu, the aroma will become fragrant.

If you ever visit China especially the northern provinces, I highly recommend trying at least one bowl of authentic Lanzhou beef noodle soup. You can be served with extremely wide noodles, thick noodles, thin noodles, and extremely thin noodles and may have the chance to watch the hand-pulled process.