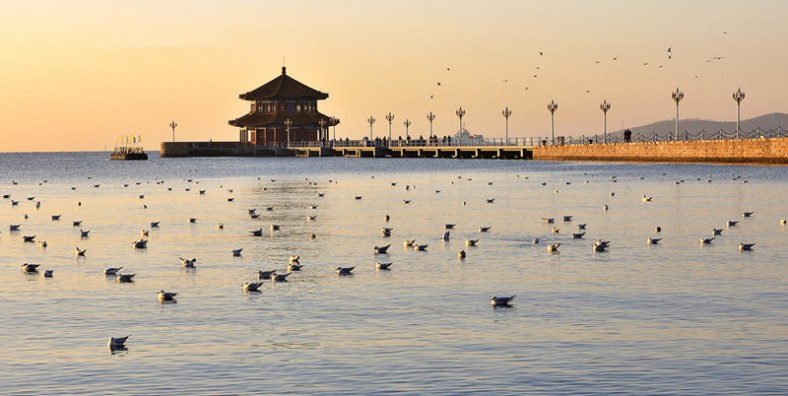 Why is Zhanqiao Pier so Special?

Qingdao trestle bridge is located at the southern end of Zhongshan road, Qingdao, which is crowded with tourists. the bridge body dips into the crescent-shaped Qingdao bay from the coast. The bridge is designed for tourists to visit and stop at tourist boats, from which they can see Qingdao on the sea.

Qingdao trestle was built in 1892, the 18th year of the reign of emperor Guangxu of Qing dynasty. it is the earliest military dedicated artificial wharf building in Qingdao. it is now an important landmark building and a famous scenic spot in Qingdao.

Qingdao Zhanqiao Pier has a history of more than 100 years. In 1891, Li Hongzhang, governor of Zhili province and minister of Beiyang, accompanied by Zhang Yao, governor of Shandong province, visited jiaoao at that time. when he returned to Beijing, he resolutely proposed to the Qing court that the area around Qingdao mouth should be fortified.

Qingdao Zhanqiao Pier was built in 1892, the 18th year of the reign of Emperor Guangxu of the Qing Dynasty. In 1892, the Qing government sent Gaoyuan Zhang, the company commander of Dengzhou, to take four battalions of officers and soldiers to Qingdao. In order to facilitate the transportation of military supplies for the army, two piers were built, one of which was the trestle, completed in 1893, with a length of 200 meters and a width of 10 meters. The piers were stone-based and gray with iron guardrails on both sides of the bridge deck.

In December 1922, after Qingdao was recovered by China’s Beiyang government, Chinese sailors paraded here to show the recovery of China’s sovereignty.

On April 25, 2014, after 11 months of reinforcement and maintenance, the trestle reopened.

Qingdao is located in the north temperate monsoon region and has a temperate monsoon climate. Due to the direct regulation of the marine environment and the influence of the southeast monsoon, ocean currents and water masses from the ocean surface, the urban area has obvious marine climate characteristics. The air is humid, the temperature is moderate, and the four seasons are distinct. The temperature rises slowly in spring, one month later than inland. Summer is humid and rainy, but there is no extreme heat. In autumn, the weather is high and cool, with less precipitation. In winter, the wind is strong and the temperature is low, the duration is long, but there is no severe cold.

The road along the north-south straight line with trestle bridge is Zhongshan road, which is an old commercial street in Qingdao with a history of more than 100 years. After the German occupation of Qingdao, in order to build a deep-water wharf in Houhai, a north-south road was opened in 1899, which was the embryonic form of Zhongshan Road.

The small island opposite Huilan Pavilion is Qingdao.  Small Qingdao is located in Qingdao Bay on the north side of Jiaozhou Bay’s estuary, with beautiful scenery.

The beach to the west of the trestle bridge is the sixth bathing beach, which is the smallest one in the city. it is adjacent to the bustling Zhongshan road and has a very beautiful surrounding environment. it can accommodate thousands of tourists to swim at the same time.

The Sea Palace is a tourist place integrating sightseeing, entertainment, performance and catering. With an investment of more than 100 million RMB, it is listed as a special class restaurant in Qingdao for its first-class environment and five-star service.

There are a lot of tourists on the trestle on weekdays, especially on various holidays. You should pay attention to safety when walking beside the trestle and take good care of your belongings.

Take the subway
Take Metro Line M3 and get off at Qingdao Station.