Day 1: The tour begins around midday at Shuangliu International Airport in Chengdu, Sichuan’s attractive provincial capital city, and we’ll set off across the Red Basin to Longcang Gou, where we’ll spend three nights.

Day 2: We’ll spend time exploring several different habitats in the surrounding mountains, ranging from deciduous forest on the lower slopes to tracts of bamboo and stands of mixed coniferous-rhododendron forest higher up. 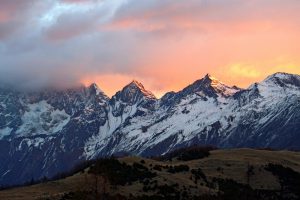 Some superb birds occur here, and we’ll concentrate on finding several of the very localized endemics—Grey-hooded Parrotbill and Emei Shan Liocichla. Parrotbills are particularly well represented in Sichuan, and in addition to Grey-hooded we hope to see Great, Three-toed, Ashy-throated, Fulvous, and Golden. Numerous warblers, including eight bush warblers and no fewer than 17 species of Phylloscopus, can be seen on this tour, and a good number of them breed here at Longcang Gou. Other possibilities in this area include the magnificent White-throated Needletail, Maroon-backed Accentor, Chinese Shortwing, Vinaceous Rosefinch, and Grey-headed Bullfinch.

Golden-spectacled Warbler has recently been split into several different species, four of which occur in Sichuan, and we expect to encounter three of these attractive sprites as we explore this region. Mid-altitude forests will ring to the sounds of Oriental, Lesser, and Large Hawk Cuckoos, making it a challenge to distinguish more subtle vocalists such as Emei Shan Liocichla and Slaty Bunting. We’ll spend three nights in a comfortable guest house near the base of the mountain.

Day 3: After anohter morning searching for specialties that we might have missed earlier, perhaps including Chinese Bamboo Partridge (much easier to hear than to see) and Hodgson’s Hawk Cuckoo, we’ll drive west to Laba Gou, a similar forested sanctuary. Laba Gou shares many of the same species as Longcang Gou but some, such as the gorgeous Temminck’s Tragopan and Lady Amherst’s Pheasant, are easier to see.

Day 4: Spending a full day in Laba Gou, we’ll search out other species such as Brown and Spotted Bush Warblers. Here, as at Longcang Gou, we also have a reasonable (perhaps 30%) chance of encountering a Red Panda. Night at Laba Gou.

Day 5: After another morning at Laba Gou, we’ll drive further west to the town of Luding, where we’ll spend the next two nights.

Day 6: We’ll spend the day exploring the mountain of Erlang Shan on one of several roads that cross Sichuan’s high passes. These roads have now been replaced by a tunnel, which means that our birding should be relatively undisturbed by traffic. Lady Amherst’s Pheasants are common on Erlang Shan, and we expect to encounter several, hopefully including a resplendent adult male. Another target species here is one of Sichuan’s premier avian jewels, the fabulously named Firethroat. We should be able to find at least one of these truly world-class songsters. The supporting cast should include species such as Slaty-backed Flycatcher, Chinese Babax, and Spotted Nutcracker. Night in Luding.

Day 7: After a final morning near Luding we’ll drive on to our next base near the city of Ya’an. Night near Ya’an.

Day 8: Leaving Ya’an, we’ll wind our way through deep valleys and narrow gorges, eventually reaching Rilong, a thriving tourist town at the foot of the mighty “Four Sisters Mountains,” where we’ll spend four nights but not before we’ve searched for more avian delights such as Speckled Woodpigeon, Sichuan Bush Warbler, and Slaty Bunting.

Days 9–11: Dominated by spectacular mountains, Rilong is an ideal base from which to explore the neighboring Wolong Nature Reserve. World-renowned as the headquarters of Giant Panda conservation, Wolong also has much to offer the birder. The whole area is scenically stunning, and although we’re unlikely to see a wild Giant Panda (though we have seen Red Panda in the reserve), the magnificently forested mountains, extensive stands of bamboo, splendid alpine meadows, and rugged snowcapped peaks harbor some truly outstanding birds. 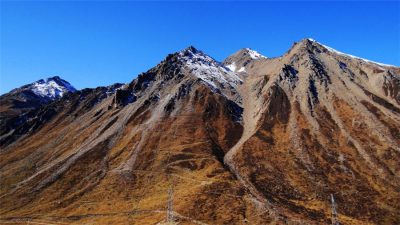 With three full days to explore the area, we’ll have numerous options. We’ll cross the mighty Balangshan Pass on a daily basis, spending some time around the summit, which at just over 14,700 feet is the highest point we’ll reach on the entire tour. Small coveys of scurrying Snow Partridges and Tibetan Snowcocks are regularly seen on the scree slopes beside the road, as are Grandalas, the males dazzling in their cobalt-blue plumage. Other high-altitude specialties could include Bearded Vulture (Lammergeier), Red-billed and Alpine Choughs, Alpine Accentor, Brandt’s Mountain Finch, and Red-fronted Rosefinch. Koklass Pheasant, the recently-split Chinese Rubythroat and Kessler’s Thrush all breed close to the tree line here, and while the former is elusive and difficult to see, we’re sure to hear its unpleasant barking calls ringing across the valleys.

With luck we might also find a covey of handsome White Eared Pheasants or perhaps even a Chinese Monal. Farther down on the mountain’s mid-slopes we’ll search for both Barred and mighty Giant Laughingthrushes, as well as Chinese Leaf Warbler, Chinese Fulvetta, and Sichuan Mountain Thrush. Nor will we neglect the mammals—the park boasts reasonable populations of Himalayan Marmot and both Blue Sheep and Takin. Nights at Rilong.

Day 12: Leaving Rilong we’ll wind our way through another series of valleys and cross a few smaller passes on our way to Maerkang, where we’ll spend two nights. 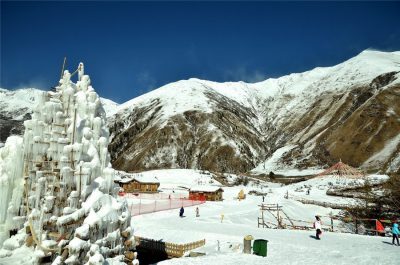 Day 14: After another morning on the Zhegushan Pass we’ll continue to the Qinghai-Tibetan Plateau proper. We’ll stop just as we crest the eastern edge of the plateau, where amid the more gently undulating grasslands we’ll explore a couple of isolated stands of conifers, searching in particular for the endangered endemic Sichuan Jay as well as Sichuan and White-browed Tits and Plain and Elliot’s Laughingthrushes. Night in Hongyuan.

Day 15: Moving farther onto the plateau, past tented camps and fields of yaks, we’ll constantly scan for more specialties such as the comical Ground Tit, hulking Tibetan Larks, both White-rumped and Rufous-necked Snowfinches, and the spectacular Przevalski’s Finch, the latter now in a family of its own. Our destination is Ruoergai, a relatively modern Tibetan settlement right in the heart of some exciting plateau birding. In the afternoon we’ll head off to search the surrounding steppes for parties of majestic Black-necked Cranes, and with luck we might also find a Saker Falcon or Chinese Grey Shrike of the distinctive giganteus form. Night in Ruoergai.

Day 16: We’ll spend a full day around this fascinating Tibetan settlement, exploring a variety of bird-rich habitats ranging from areas of conifer forest just off the plateau to other areas of scrub, rolling grassy meadows, and upland lakes. Here we’ll be looking for Blue Eared Pheasant, Tibetan Lark, White-rumped Snowfinch, Tibetan Fox and possibly even Wolf, among many others. Night in Ruoergai.

Day 18: We’ll spend the morning near Jiuzhaigou National Park and will explore an area outside the park where both Snowy-cheeked and Barred Laughingthrushes are more regular and where we’ve also seen Three-toed Parrotbill, the diminutive Spectacled Parrotbill and Spectacled Fulvettas. In the afternoon we’ll start our journey back to Chengdu, stopping at a couple of sites, perhaps for Siberian Rubythroat, Sichuan Tit, or White-browed Tit-warbler, en route. Night in Maoxian. 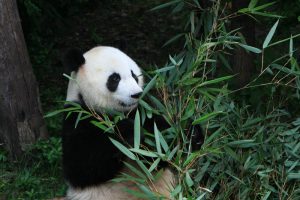 Day 20: The tour concludes this morning in Chengdu.