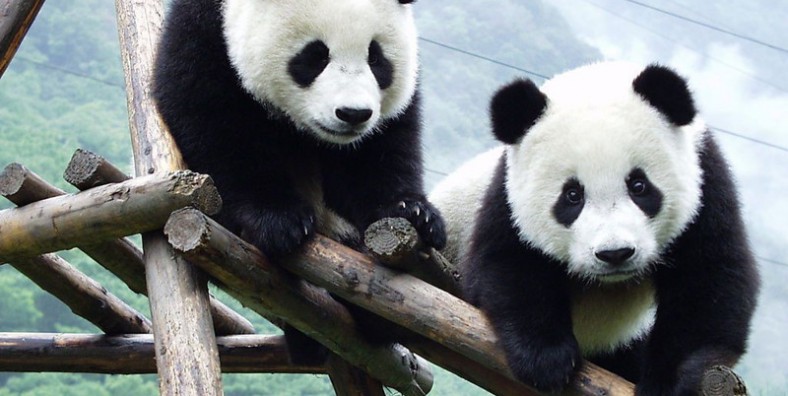 Wolong Panda Reserve (Wolong National Nature Reserve), which is acclaimed as the Hometown of Giant Pandas, the National Treasure of China. More than one hundred pandas once inhabited there, accounting for over 10% of the nation's total.

Recommended Visiting Time: half a day

Wolong Panda Reserve (Wolong National Nature Reserve), which is acclaimed as the Hometown of Giant Pandas, the National Treasure of China. More than one hundred pandas once inhabited there, accounting for over 10% of the nation’s total.

One of the World Natural Heritages in China.

The earliest, largest and best-known panda reserve in China.

Placed on UNESCO Man and Biosphere Reserve Network in 1980.

Widely known as a ‘Bio-gene Bank’

Wolong Panda Reserve is located in the western margin of Sichuan Basin, the southeast slope of the Qionglai Mountains, southeast of Aba Tibetan and Qiang Autonomous Prefecture in Sichuan Province, the west of Yingxiu Town in Wenchuan County in the upper reaches of Minjiang River, the alpine valley in the Chengdu Plain to the Qinghai-Tibet Plateau

If you want to get rid of hustle of transportation and troublesome navigation, you can book a private tour package which covers visiting, dining and transfer from us. Our local tour guide and driver will escort you to Wolong Panda Reserve with speed and convenience, and take care of all the details. You just need to focus on visiting.

Legend of Wolong
In Chinese, Wo long means sleeping dragon. The local Qiang people believe a giant dragon came wandering through the valley and fell in love with the beauty of the mountains. Enamored by the beauty the dragon decided to go to sleep and then never woke up.
The Wolong Panda Center was located in the Wolong Nature Reserve, which covers 200,000 hectares (494,210 acres) with elevations ranging from 1555 to 4600 meters (4,000 to 11,000 ft).
The Wolong Nature Reserve was established in 1963 to further the Chinese Government’s commitment to preserve the giant panda that is seen as a national treasure.
Before the earthquake, Wolong was the oldest and largest panda breeding center in the world.
It was a peaceful valley home to 63 giant pandas
There was a staff of 85 working and living in the immediate vicinity
The bamboo forest supported the needs of the giant pandas at the center and provided a livelihood for local villagers
The Center generated 1oo,ooo yuan ($14,623 US) in tourism
Cub survival went from 30% to 90% following the construction of the Wolong Panda Center in 1980
Sadly, the 2008 Earthquake destroyed the Wolong Panda Center at Hetaoping. A new center is nearing completion in Gengda.

Gengda Wolong Panda Center
The Panda center at the Wolong Nature Reserve has been rebuilt and is now complete. Geological studies confirmed the danger of rebuilding at the original Wolong Panda Center and a safer location was selected 23 km away in Gengda Town in the Wolong Special Administration Region.
The center is still within the large Wolong Nature Reserve but divided into two sections. It is a Panda base integrating scientific research, captive breeding and reintroduction into the wild.The area in Shengshuping is for captive breeding and in Huangcaoping the concentration is on reintroduction training.
There is a 1,500 sq meter (about 5,000 sq feet) research laboratory, and a 1,500 sq meter (about 5,000 sq feet) Panda Hospital. There are 59 enclosures with a staff office for each 3 to 5 enclosures. Each enclosure has both an indoor and an outdoor area.
The reintroduction area includes enclosures of three different sizes for different training levels.
There is also an office building, a management building, a food processing center, a storage building, a training center, and staff facilities.
A large bamboo forest covering 275.6 hectares (about 680 acres) is being planted for the captive Giant Pandas.
The entire grounds have a 5 km (3.10 miles) foot path.
Prior to construction of the new Wolong Panda Center, the infrastructure in the area had to be rebuilt and roads and bridges repaired or reconstructed. Progress was delayed by devastating mud slides in the spring of 2009. Several construction workers were killed. The damage caused construction to fall behind schedule.
Construction has been completed on the new Wolong Panda Center and the Disease Control Center. There are now over 30 pandas residing at the center. However, due to massive rainstorms and floods the last several years, the road to the new Wolong Panda Center had been completely washed out. There is a completed and beautiful public highway and the Gengda Center is now open to the public.

The Centre has two types of ‘accommodations’ for giant pandas – the Captive Cages and the Semi-nature Enclosures.
Most of the giant pandas in the Centre stay individually in the captive cages, which are in fact large enclosures, each consists of an in-door room and an out-door courtyard.The semi-nature enclosures are very large wild areas but protected by border fences. Those giant pandas that will soon be released back to the wild will be put in the semi-nature enclosures for a long enough period of time for them to adapt to the natural environment. Although food has to be provided, the giant pandas will sleep there, eat there and recover their natural survival skills there until they can be released back to the wild.
Unlike regular zoos, Wolong National Nature Reserve provides natural environment for pandas and they are not kept in cages. Therefore, while driving or walking in the reserve, you may come across cute pandas. In the reserve, there are Baby Panda Zone, Sub-adult Panda Zone, Grown-up Panda Zone, Breeding Zone, and Wildness Training Zone. You may see them walking around slowly, romping happily, eating bamboos with appetite, or climbing up the stub to present visitors a show.

Natural scene
Besides those cute creatures, the natural scene itself in Wolong National Nature Reserve is a delight for visitors. Visitors will see luxuriant bamboo groves here and there. What also makes Wolong special is that it is more natural and less commercialized. Without huge crowds of tourists, all that the reserve has are undulating hills, murmuring streams, fresh air, adorable pandas, and other rare animals.

You can choose to accommodate at hotel at Chengdu downtown, where have different levels of hotel.
Please check out at our website.

Dujiangyan Confucius Temple is the largest county-level Confucius Temple in Sichuan Province. In ancient times, it was used for commemorating and worshipping Confucius and his disciples and it was the place to study Confucianism.
Qingcheng Mountain — World Heritage, this famous Taoist mountain was portrayed in Kungfu Panda

There are adult pandas and young pandas, while the newborn pandas are not open for visiting.