The Ruined Stone City in Kashgar 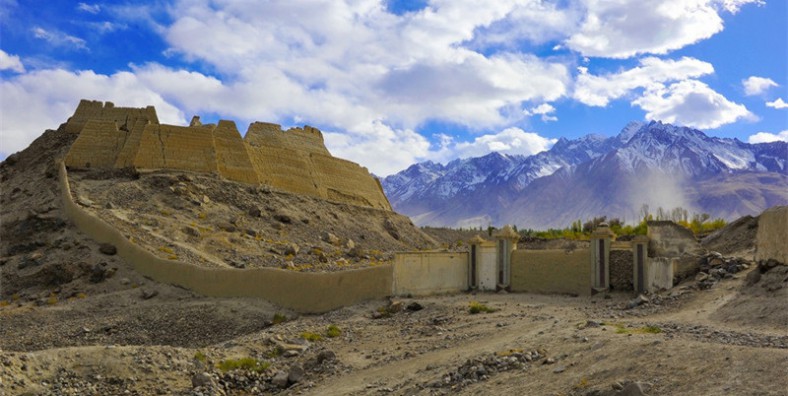 Meaning Stone City in Turki, Tashkurgan was so named after an ancient city, more than 2,000 years old. It is located in the north of Tashkurgan County, Xinjiang Province.

Why is The Ruined Stone City So Special?

A temple occupied the eastern part of the city. In the western and southeastern parts are found ruined houses. On the ruins of the temple the Pulitin Office of the Qing Dynasty was built. The city is oval in shape. The city walls were built with sun-dried bricks on stone foundation. It is 1285 meters in circumference outside. Only parts of city walls, gate of inner city, turrets, and parapet walls have remained intact. There have been excavated coins with legends of Qianyuantongbao and Sanskirt documents. The city dates from an early time and had once been the capital of the Kingdom of Jiepantuo. Inside the city were scattered potsherds, millstones, and so on. Now is classified as a major cultural site protected by the Autonomous Region.

Where is The Ruined Stone City

The Ruined Stone City Located on a tableland northeast of the county seat of Taxkorgan Tajik Autonomous County, the covers an area of 100 thousands square meters and consists of ruins of city and temple of the Tang times and government office of the Qing Dynasty.

During the Han Dynasty, this was the royal city of Plough, one of the 36 western regions. After the Tang Dynasty government unified the Western Regions, there was a Green Ridge Catchment. In the early Yuan Dynasty, large-scale construction was carried out to expand the city wall, and the old stone city was changed into a new one. In the 28th year of Guangxu’s reign, the Qing government set up the Plough Hall here to repair the old castle.

Famous for its location at the junction of the middle route and southern route of the ancient Silk Road, the Stone City is also the place where roads from Kashgar, Shache, Yingjisha and Yecheng to the Pamirs meet. Because of its strategic importance, it was made the capital of Puli Country in Western Regions during the Han Dynasty (206 BC-220). After the Western Regions were unified and ruled by the Tang Government, administrative offices were established here. Later in the Yuan Dynasty (1271-1368) the Government repaired its old buildings and enlarged its area. It was in the late Qing Dynasty (1644-1911) that the Government built a new city to the south and the Stone City was abandoned.

Stone City in Turki, Tashkurgan was so named after an ancient city, more than 2,000 years old. It is located in the north of Tashkurgan County, Xinjiang Province.

Built on a mound of 20 meters high (about 67 feet high), all that remains of the Stone City today are some parts of the periphery of city, such as the gate, city wall whereas the buildings inside the city had all collapsed. However you can still enjoy the view of the ruined city, the surrounding snow-crowned mountains, grasslands, rivers and even the flavor of national traits of the Tajik people.

from Kashgar to Tashikuergan bus is crossing bus. The bus arrive Tashikuergan in the evening, and will continue to go to Khunjerab Pass and Pakistan Sosat in the next day.