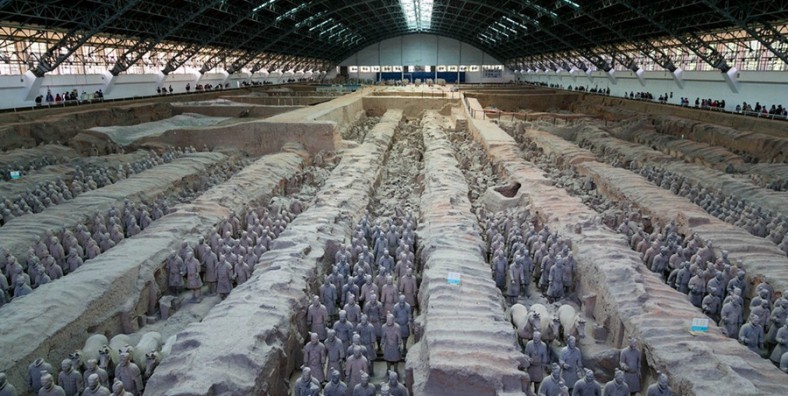 The Qin Shi Huang Mausoleum is located in Lintong District, Xi'an, Shaanxi province of China. This mausoleum was constructed over 38 years, from 246 to 208 BC, and is situated underneath a 76-meter-tall tomb mound shaped like a truncated pyramid. The layout of the mausoleum is modeled on the Qin capital Xianyang, divided into inner and outer cities. The main tomb chamber housing the coffin and burial artifacts is the core of the architectural complex of the mausoleum.

Why is Emperor Qin Shi Huang Mausoleum So Special？

Where is The Qin Shi Huang Mausoleum?

Located at the northern foot of Lishan Mountain, 35 kilometers northeast of Xi’an, Shaanxi Province, Qinshihuang Mausoleum is the tomb of Emperor Qinshihuang, founder of the first unified empire in Chinese history during the 3rd century BCE. Begun in 246 BCE the grave mound survives to a height of 51.3 meters within a rectangular, double-walled enclosure oriented north-south. Nearly 200 accompanying pits containing thousands of life-size terra cotta soldiers, terra cotta horses and bronze chariots and weapons – a world-renowned discovery – together with burial tombs and architectural remains total over 600 sites within the property area of 56.25 square kilometers. According to the historian Sima Qian (c. 145-95 BCE), workers from every province of the Empire toiled unceasingly until the death of the Emperor in 210 in order to construct a subterranean city within a gigantic mound.

Qin Shi Huangdi (259 BC – 210 BC), the first emperor of China, ascended the throne at the age of 13, when construction of his tomb began. On completion of his many conquests, he ordered 720,000 conscript laborers to hurry up on building his royal tomb. It was finished just-in-time in 210 BC for his use. His son, the second Qin Emperor,saw his entombment.

Qin Shi Huang ( 秦始皇) was born Ying Zheng (嬴政) or Zhao Zheng (趙政), a prince of the state of Qin. He became Zheng, the King of Qin (秦王政) when he was thirteen, then China’s first emperor when he was 38 after the Qin had conquered all of the other Warring States and unified all of China in 221 BC. Rather than maintain the title of “king” (王) borne by the previous Shang and Zhou rulers, he ruled as the First Emperor (始皇帝) of the Qin dynasty from 221 BC to 210 BC. His self-invented title “emperor” (皇帝), as indicated by his use of the word “First”, would continue to be borne by Chinese rulers for the next two millennia.

The Qin Terracotta Warriors and Horses are world famous, attracting a large number of tourists from home and abroad to visit each year.  However, they are only a part of the yet unexcavated mausoleum of Emperor Qin Shi Huang located to its west. Inside it, greater things are yet to come.

Buried deep under a hill in central China, surrounded by an underground moat, an emperor has lain undisturbed for more than two millennia. He is China’s first emperor, Qin Shi Huang, who died in 210 B.C. after conquering six warring states to create the first unified nation of China. Wanting protection in the afterlife, Emperor Qin created an army of 8,000 soldiers, 130 chariots with 520 horses, and 150 cavalry horses made of terracotta.

In 1974, some farmers happened to dig up what turned out to be a large-scale pit with terracotta soldiers and horses, belonging to the Emperor Qin. After 2,200 years, the Emperor’s tremendous army stood as though living again. The life-size terracotta solider they dug out of the ground turned out to be just one of an army of thousands, each utterly unique, with individual clothing, hair and facial features.

The Mausoleum of Emperor Qin Shi Huang has a twofold wall of inside and outside, inside and outside walls are about 8 to 10 meters high, and today there is still remaining sites. Inner city is rectangular, perimeter of 3840 meters, in the north wall there are 2 doors, and in the east, west and south there is one door each wall, inside is grave mound. Outer city is rectangular, perimeter of 6210 meters; the four corners of walls have one door per wall. Burial area is in the south, sleeping chamber and palaces complex are in the north.

It was verified that the palace wall is about 168 meters long, from north to south is 141 meters, the south wall is 16 meters wide, 22 meters wide at the north wall. Wall is done with multilayer fine soil compaction, and each layer is about 5 ~ 6 cm thick, very delicate and strong. In the process while built, in order to detect whether the soil compaction of wall was hard, construction personnel will stand at a distance with bows and arrows shot wall, the constructors would shoot arrow and if the arrow could be plugged into the wall then the wall must be torn down.

How to get to Qin Shi Huang Mausoleum

If you want to get out of the traffic and hassle of navigation, you can book a private tour package that includes visiting, dining and transfer from us. Our local guide and driver will escort you to the Qin Shi Huang Mausoleum in Xi’an in the fastest and most convenient way and take care of all the details. You just have to focus on the visiting.