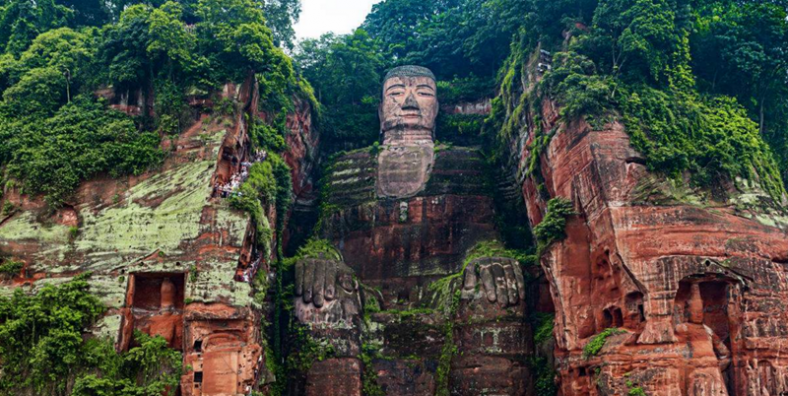 Why is Leshan Giant Buddha So Special?

Leshan Giant Buddha is a 71-metre tall stone statue, built between 713 and 803, depicting Maitreya. It is carved out of a cliff face of Cretaceous red bed sandstones that lies at the confluence of the Min River and Dadu River in the southern part of Sichuan province in China, near the city of Leshan. In December, 1996, the location of the Buddha was included by UNESCO on the list of the World Heritage sites. Begun in the year 713 in the Tang Dynasty, and finished in the year 803, the statue took people more than 90 years to carve. During these years, thousands of workers had expended their efforts and wisdom on the project. As the biggest carved stone Buddha in the world, the Giant Buddha is featured in poetry, song and story.

Where is Leshan Giant Buddha?

If you want to get rid of hustle of transportation and troublesome navigation, you can book a private tour package which covers visiting, dining and transfer from us. Our local tour guide and driver will escort you to Leshan Giant Buddha with speed and convenience, and take care of all the details. You just need to focus on travel.

The transport of Leshan is quite convenient. We can offer transfer service or tour package of Leshan Giant Buddha from Chengdu. Also, if you want to travel on your own, that is okay. Visitors can travel to Leshan Giant Buddha by bullet train, bus or car rental. Below list some useful transportation information from Chengdu to Leshan. Hope it is helpful to your Leshan tour plan.

To see Leshan Giant Buddha in Leshan City, you need to get to Leshan City first. The best way to get to Leshan City from Chengdu is by bullet train. No matter which direction you are in Chengdu, take the subway to Tianfu Square and then go to Chengdu East Railway Station. There are 18 bullet trains depart from Chengdu East Railway Station to Leshan Railway Station every day. The journey takes about from 46m to 1h25m varying from different trains. The first train departs at 06:18 and the last one departs at 20:59. The ticket fare ranges from 54 to 162 yuan depending on which standard seat you are taking. After getting off the train at Leshan Railway Station, take a local public bus like Bus 3 or taxi to get to Giant Buddha Scenic Area.

The solemn Leshan Giant Buddha is calmly sitting on the cliff of Xijiao Hill, putting his hands on his knees, with the rivers flowing below his feet. Standing 71 meters tall, Leshan Giant Buddha is the tallest Buddha statue in the world. His head is 14.7 meters in height and 10 meters in width. The Buddha’s hair is arranged in special spiraled curls with 1,021 twists that have been skillfully embedded in the head. He has 7-meter long ears which is capable of holding two people inside, 5.6-meter long nose, 5.6-meter long eyebrow. While, the width of mouth and eye is 3.3 meters. His neck is 3 meters tall, shoulder is 24 meters wide, finger is 8.3 meters long. It is 28 meters from his knees to his instep. Moreover, his instep is about 8.5 meters in width where can accommodate about a hundred people and even his smallest toenail can accommodate a seated person.

The Leshan Giant Buddha statue (also known as Dafo), is located to the east of Leshan City and sits at the junction of three rivers; the Min River, Qingyi River, and Dadu River. It faces the sacred Mount Emei with the rivers flowing below its feet and depicts a stout, smiling monk, calmly sitting, resting his hands upon his knees with heavy-lidded eyes gazing across the river. The statue is believed to be Maitreya, a Buddha and disciple of Sakyamuni, who is thought to have been the founder of Buddhism, symbolizing brightness and happiness. Worshiping Maitreya was especially popular between the 4th and 7th Centuries. Today, images of him can still be found in many Buddhist temples throughout China and the Leshan statue is considered the most inspiring of them all.

The charm of the Buddha lies not only in its size but also in its architectural artistry. There are 1,021 buns in the Buddha’s coiled hair. These have been skillfully embedded in the head. The skill is so wonderful that the 1,021 buns seem integral to the whole. Another architectural highlight is the drainage system. This system is made up of some hidden gutters and channels, scattered on the head and arms, behind the ears and in the clothes. This system, which helps displace rainwater and keep the inner part dry, plays an important part in the protection of the Buddha. The large pair of ears, each seven meters (about 23 feet) long, is made of wood and is decorated by mud on the surface. For craftsmen of thousands of years ago, it was not easy to fix these to the stone head.

The History of Leshan Giant Buddha

The construction of Big Buddha was the idea of a Chinese monk called Haitong, who hoped that Buddha would calm the turbulent waters (Min River, Qingyi River and Dudu River) that plagued the shipping vessels traveling down the river. His plans were not just supernatural – the enormous amount rubble carved away from the cliff would be deposited in the river, altering the currents and calming the waters. He want to many places to raise the money and when he got back to begin the construction, the local government came and threatened. Haitong is said to have gouged out his own eyes to show his piety and sincerity. Hence, Leshan Giant Buddha was first constructed in the year of 713 AD in Tang Dynasty. Haitong passed away when the Big Buddha was cultivated to shoulders and the construction was stuck due to insufficient funding. Many years later, a Sichuan Jiedushi sponsored and Haitong’s disciple began to continue. In the year of 803 in Tang Dynasty, Leshan Giant Buddha was finally finished under the hard work by three generation of craftsmen for 90 years. Till now, this engineering masterpiece has a history over 1300 years.