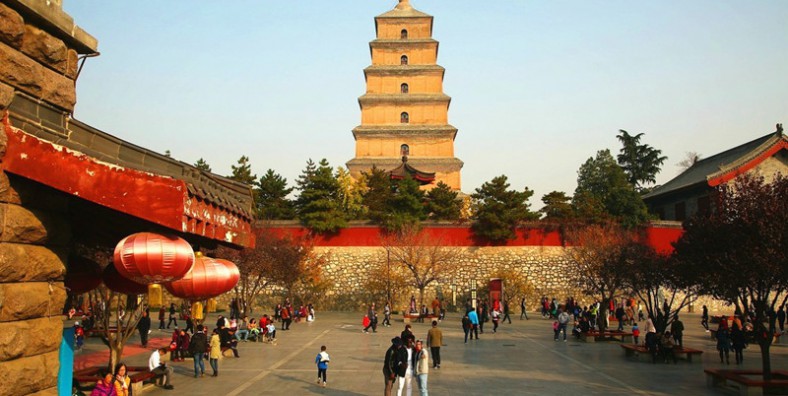 The Giant Wild Goose Pagoda, located in southern Xi’an, is a very famous ancient pagoda in China built for more than 1,300 years. It is the bright pearl on the Silk Road with excellent architectural beauty, precious Buddhist relics, rich religious culture, stories of the famous ancient monk - Xuan Zang, etc.

When and Why the Giant Wild Goose Pagoda Was Built

The Pagoda was built in the Tang Dynasty (618-907) for the study of Buddhist scriptures. Although it has been attacked by centuries of weather, war and seismic activity, which destroyed most of the original material of the structure, a pagoda by this name and style still exists on the site. The Tang regime gave orders to build a chamber for the translation of Buddhist scriptures in an effort to have the then widely renowned Master Xuanzang agree to be the head of the temple. Xuanzang was a Buddhist monk who traveled to India, translated Sanskrit scriptures and developed theories of consciousness, karma and rebirth that were adopted by some later popular schools of Buddhism.

The Big Wild Goose Pagoda or Giant Wild Goose Pagoda (大雁塔) is a well-preserved holy place for Buddhist with a history of over 1300 years. It is the landmark building of Xi’an, the key national cultural relics and AAAA attraction.

Big Wild Goose Pagoda was finished in 652 A.D. Its five stories were 60 meters in height. The decay of the earth-cored pagoda made necessary the new construction of a new 10-storey pagoda from 701 to 704 A.D. However, the winds of war in the years to come, not to mention a massive earthquake in 1556, reduced the pagoda almost to ruins, which in turn resulted in the construction of a 7-storey, 64 meter-tall structure in the later Ming Dynasty, which still stands today.

Daci’en Temple (大慈恩寺), where the Giant Wild Goose Pagoda is located in, was built in 648 AD, because the prince Li Zhi (李治) wanted to pray for his deceased mother and pay back to her kindness, when Master Xuan Zang (玄奘) was announced the first abbot.

In 652 AD, Xuan Zang brought the precious sutra and other relics from India along the Silk Road back to ancient China and translated the valuable Buddhist text here, since then the Giant Goose Pagoda has been one of three largest Buddhist text translating places in ancient China. To well preserve these treasurable Buddhist culture, the pagoda was constructed for 5 floors. According to the historical materials, the Giant Wild Goose Pagoda has been rebuilt for many times, and it finally gets the appearance of 7 floors of about 65m high at present.

First enter the Daci’en Temple to feel the rich Buddhist culture and admire the featured old temples. And then, appreciate the appearance of Giant Wild goose Pagoda from a distance or in front of it. If you want to explore more, you can enter the Pagoda to admire the rich Buddhist culture with the precious relics of Buddha statue, paintings, stories of Xuan Zang, etc. up to the top. And appreciate the beautiful view of the while Xi’an city at the 7th floor. Then, come down to north square to have fun with colorful fountains dancing to the music. (For 2-3 hours)

Da Ci’en Temple is the home of Giant Wild Goose Pagoda. In 648, the temple is built to commemorate the dead virtuous queen, for which the status and scale far exceeded all others. Today, with an area of 50,738 square meters (12.5 acres), one seventh of the original area, it still retains its grandeur. Before the temple, there stands a statue of hierarch Xuanzang, the meritorious hierarch. With guarding lions at both sides of the gate, the temple seems stately for lions were said to function as talismans. Entering the temple you will see two buildings – Bell Tower in the east and Drum Tower in the west. Along the central axis are arranged the Hall of Mahavira, Sermon Hall, Big Wild Goose Pagoda, and the Hall of Xuanzang Sanzang.

The Base of the Pagoda

Buddhist statues with delicate carving and couplets of brick carving are well placed on the lintel and door frame. Furthermore, you can appreciate the historic tablet of high value composed by the Taizong Emperor (唐太宗) and the Gaozong Emperor (唐高宗) of Tang dynasty and wrote by the renowned calligrapher Chu Suiliang.

The body is the main part of this pagoda, so you can just stroll from the door up to the top floor, admire the featured cultural relics and feel the dense atmosphere of Buddhism. From the history, character, story of Tang dynasty and the life brief of Xuan Zang after entering the south gate. Clime up higher, you can see a series of Buddhist statues, paintings, famous poems for over 1, 000 years, the rare poems of Xuan Zang, and so on.

The Sarira is the especially holy object for worshipping in Buddhist culture. There are 2 precious Sariras preserved in this pagoda, which were presented by the Shiwuqian (释悟谦) Master from India. According to the related books, Xuan Zang has brought many Sariras back to China, 150 or more than 10,000, no believable evidence. And people still believe they are kept in the underground palace.

The north square is actually a fountain square of 20,000 square meters wide, which is both the largest fountains square and largest waterscape square in Asia. You can see the 2 group sculptures of 100m long, 8 large figure sculptures and 40 landscape sculptures, while appreciate the grand colorful fountain show dancing with the music. Visitors always feel it relaxed with the cool water spurting out, sparkling colorful lights, and the innocent laughing of local people.

Many specialists believe that there is a palace under the pagoda, which is like the palace under the pagoda in Famen Temple (法门寺) . Evidenced from the historical records, Xuan Zang has brought a lot of valuable relics from India in 645 AD. Recent years, the underground palace was found existing, and many precious relics of Sariras, Pattrra-leaf Scriptures, statue of Xuan Zang, wall paintings, etc. are placed there.

How to get to Giant Wild Goose Pagoda

If you want to get out of the traffic and hassle of navigation, you can book a private tour package that includes visiting, dining and transfer from us. Our local guide and driver will escort you to the Giant Wild Goose Pagoda in Xi’an in the fastest and most convenient way and take care of all the details. You just have to focus on the visiting.