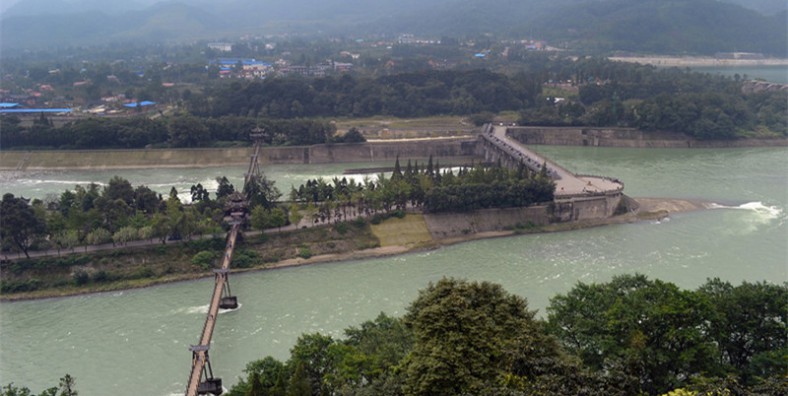 Dujiangyan Irrigation System is a pearl in the irrigation work of ancient China, and it’s the oldest and the only preserved grand irrigation system in the world, which has no dam for water-diversion and still in service today. The system was built in 256 of Qin Dynasty (221BC-206BC) under the leadership of Li Bing (李冰, the chief official of ancient Chengdu) and his son. Built over 2,200 years ago, Dujiangyan Irrigation System still provides benefits to the area, and it’s fame Tian Fu Zhi Guo (天府之国, means “country of heaven” or “land of abundance”).

The irrigation system was built on the Minjiang River at the foot of Yulei Mountain, northwest of Dujiangyan City and west of Chengdu Plain in Sichuan Province.

Dujiangyan Irrigation System was built on Minjiang River, which is a large tributary of Yangtze River and flows through the west of Sichuan Basin, an area of heavy rainfall. In ancient time, during flood period, the Chengdu Plain was just a world of waters while during drought period, it was a scene of utter desolation; generally, there was no single grain was reaped in a year and people lived around often suffer from hunger. To solve the livelihood of Chengdu people and because of its specific strategic position in unifying of China, the Qin Kingdom (770BC-221BC) appoint Li Bing, a wisdom who had good knowledge of astronomy and geography, to control the flood and had the Dujiangyan Irrigation System build.

Li Bing investigated the problem and discovered that the river was swelled by fast flowing spring melt-water from the local mountains that burst the banks when it reached the slow moving and heavily silted stretch below. One solution would have been to build a dam but Li Bing had also been charged with keeping the waterway open for military vessels to supply troops on the frontier,  so instead he proposed to construct an artificial leeve to redirect a portion of the river’s flow and then to cut a channel through Mount Yulei to discharge the excess water upon the dry Chengdu Plain beyond.

Li Bing received 100,000 taels of silver for the project from King Zhao of Qin and set to work with a team said to number tens of thousands. The levee was constructed from long sausage-shaped baskets of woven bamboo filled with stones known as Zhulong held in place by wooden tripods known as Macha. The construction of a water-diversion levee resembling a fish’s mouth took four years to complete.

Cutting the channel proved to be a far greater problem, as the tools available to Li Bing at the time, before gunpoder was invented, could not penetrate the hard rock of the mountain, so he used a combination of fire and water to heat and cool the rocks until they cracked and could be removed.  After eight years of work, a 20-metre-wide (66 ft) channel had been gouged through the mountain.

Li Bing’s Irrigation System consists of three main constructions that work in harmony with one another to ensure against flooding and keep the fields well supplied with water:

Located on the hillside of south bank of Minjiang River, the Erwang Temple just faces the Dujiangyan Irrigation System. It was originally an ancestral temple in memory of Shu King which later was changed to commemorate Li Bing and his son during Jianwu Period (494-498) of Qi Dynasty (479-502) during Southern Dynasties (420-589). In Song Dynasty (960-1279), Li Bing and his son were awarded as kings in succession by Song emperors, hence the name Two Kings Temple. In the temple are enshrined statues of Li Bing and his son, valuable famous remarks about water control and tablet inscriptions given by poets.

Fulong Temple is located in Lidui Park and faces a pool below. Legend has it that during his flood control, Li Bing had subdued a dragon and had it under the Lidui. The existing temple is consists of three halls, the front of which possesses a Stone Statue of Bi Bing built in Eastern Han Dynasty (25-220). In the temple, there is also a precious remain of female Taoism priests Jinxian and Yuzhen (both are princesses of Tang Dynasty (618-907)), the Feilong Ding (Flying Dragon Ding, an ancient cooking vessel).

Annan Bridge is located on Fish-mouth Dyke of Dujiangyan Irrigation System and stretches across both inside and outside rivers. It is hailed as one of the Five Bridges of Ancient China and is the most characteristic landscape of Dujiangyan. The previous bridge was built before Song Dynasty which was unfortunately destroyed in the war in late Ming Dynasty (1368-1644), and during the rein of Jiaqing (1796-1820) in Qing Dynasty (1644-1911), Anlan Suspension Bridge was rebuilt with woods supported by stone piers and for a length of 500 meters.

How to Get to Dujiangyan Irrigation System

If you want to get rid of hustle of transportation and troublesome navigation, you can book a private tour package which covers visiting, dining and transfer from us. Our local tour guide and driver will escort you to Dujiangyan Panda Base with speed and convenience, and take care of all the details. You just need to focus on visiting.

Being a popular tourist destination around Chengdu, Dujiangyan offers different star-rated hotels for travelers, ranging from 5-star hotel to budget hotel. You can choose where to stay in accordance with your requirements and budgets. Some visitors prefer to stay around Mount Qingcheng.

China Conservation and Research Centre for the Giant Panda (CCRCGP), Dujiangyan Base (中国大熊猫保护研究中心都江堰基地) is a brand new giant panda breeding base in Chengdu. You can hold a panda to take photos and do a panda volunteer job in Dujiangyan Panda Base.

It is the largest county-level Confucius Temple in Sichuan Province. In ancient times, it was used for commemorating and worshipping Confucius and his disciples and it was the place to study Confucianism.

You can go to travel Dujiangyan all year round. The best time is between March and June or from September to November. While Dujiangyan and Mount Qingcheng are ideal summer resorts with pleasant climate and cool wind. Besides, in summer, tourists can experience beer festival in summer night, lively and extraordinary, with foreign carnival atmosphere. See more about Dujiangyan Climate.