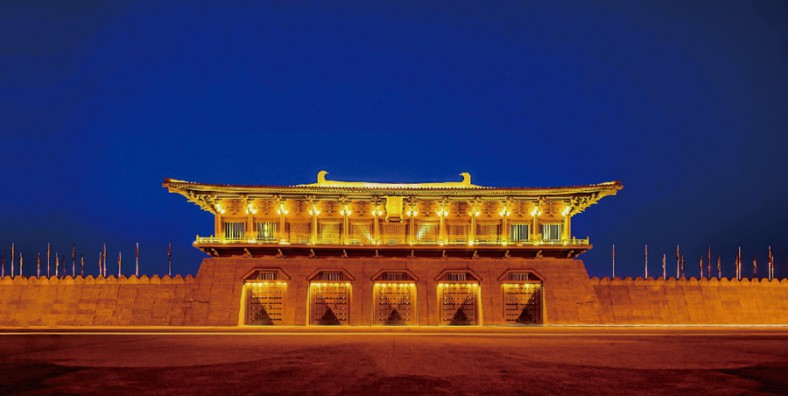 Tickets:60 Yuan for the historic relic sites and free for most areas of the park.

Why is Daming Palace National Heritage Park So Special？

The Daming Palace (大明宫) area was first built by Emperor Taizong (599-649) of the Tang Dynasty. It was built in the northeast corner of Changan that was the Tang capital city. At its height, Changan was a very big walled city. People say it measured 8 kilometers by 9.5 kilometers or about 5 miles by 6 miles. The city was rectangular, but on the northern face of the city near the northeastern corner, the Daming Palace area that contained a park and recreation area and a palace area jutted out from the walls.It too was walled and had gates leading back into the city, and in its northern area there was a small pond and stream. This addition to the city stretched about 2 kilometers or 1.3 miles north and was about 1.5 kilometers or .9 miles wide at the widest part. The area was destroyed, and currently there is a section with archeological discoveries, and the rest is a park.

In 2007, the government and the municipal committee of Xi’an launched a project to turn the historical Daming area into the Daming Palace National Heritage Park to preserve the area and allow people to enjoy the area that was once the royal grounds of the Tang Dynasty. The park opened in October of 2010. The natural pond at the site called Taiye Pond is a prominent recreational feature that has walking paths, bridges, and flocks of birds that people can enjoy. Certain key buildings were planned to be constructed to recreate the grand ambiance of the Tang era.

In 662, another emperor named Gaozong added a lot of gardens and constructed a lot of buildings, and the Daming Palace area became his clan’s dwelling quarters. He fortified the area extensively. The area was destroyed in war in the year 896.

At one time, the Daming Palace area had several palaces and temples. The biggest palace was called Huayuan. Other palaces were used to meet officials or foreign ambassadors. There were gates leading both into the main city and out to other sides. There was also a big pond called Taiye pond and a garden that people enjoyed. There was an archery hall, a bathhouse, storehouses, a drum tower, a bell tower, a Cuju (the ancient football) sports filed, and a separate entertainment ward.

Opened on the same day, the Museum of Ruined Site of Daming Palace attached to the park is a theme museum designed to be semi-underground by the Tsinghua University of China. On account of protecting the relics, the museum is also totally enclosed with air-condition, artificial daylight and all kinds of high-tech facilities, which make it a modern palace of arts. 268 pieces (sets) of cultural objects furnished with rich background information are exhibited in the museum all year round, systematically introducing the history of the Daming Palace and the development of the park.

The Archaeological Discover Center sitting at the west side of the site of the royal way of Daming Palace covers some 3500 square meters, showing several topics on archaeology by genuine cultural relics, multi-media show, interaction with visitors, etc.

In the lobby of the museum there is a legendary animal named Chiwen (鸱吻), which is the biggest one among all of that have been founded in the Daming Place. Chiwen is said to be one of the nine different-looking sons of dragon, which likes swallowing fires and was enshrined on roof for guarding a house.

The fist exhibition hall is the where the cultural relics were displayed, including mirrors, ancient shell currency, “knife money” and “Jiaozi” (交子, the earliest paper notes in the world). The second hall introduces what are usually prepared before archaeological excavation such as satellite positioning.

Hanyuan Palace was the main palace, located about 600 m (656 yards) from Danfeng Gate, the middle south gate of Daming Palace. In the Tang Dynasty, it was an important international exchange center. On every New Year’s Day, the emperors would hold great ceremonies there, and welcome ambassadors from various countries and the surrounding minorities. This majestic building reflected the great Tang Dynasty’s prosperous and broad culture and represented the highest architectural level of that time.

The north part of Daming Palace was the garden areas for living and recreation. Linde Palace, located in the northwest, was the biggest attached palace. It was the place where emperors held banquets and received ambassadors. Built in rammed-earth construction, the site measured 130 m (142 yards) long and over 80 m (87 yards) wide. Taiye Pond, also called Penglai Pond was an oval-shaped pond, covering an area of 1.6 hectares (4 acres). As beautiful as a fairyland, the royal pond absorbed the essence of Tang’s garden architecture.

How to get to Daming Palace National Heritage Park

If you want to get out of the traffic and hassle of navigation, you can book a private tour package that includes visiting, dining and transfer from us. Our local guide and driver will escort you to the Daming Palace National Heritage Park in Xi’an in the fastest and most convenient way and take care of all the details. You just have to focus on the visiting.

traveler can choose one of the following ways to the park.