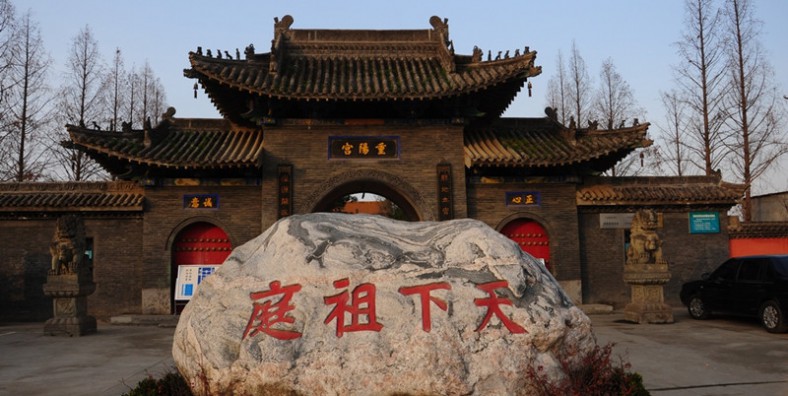 Chongyang Palace, the ancestral temple of Quanzhen School of Taoism, also known as Chongyang Wanshou Palace or Zu’an(祖庵), enjoys the reputation of “world-famous Ancestral Temple”, “Quanzhen Holy Land”. It is located in Zu’an, a small town in Huxian County(鄠县) of Xi’an, 40 kilometers away from the center of xi ‘an. All kinds of buildings cover an area of 10,800 square meters. Chongyang Palace ranks first among the three birthplaces of Quanzhen School, the other two are White Cloud Temple in Beijing and Palace of Eternal Joy in Shanxi, although they are also known as “ancestral court”, but it is built by Wang Chongyang’s disciples.

Chongyang palace is the place where Wang Chongyang, the founder of Quanzhen Taoism, practiced Taoism in his early years. Wang Chongyang advocated the integration of Confucianism, Buddhism and Taoism. He took the tenet of “three religions are roundness, see the mind and nature, only leave the trueness ” as the purpose, so his school was called “Quanzhen”.

These steles record the history, doctrines and practicing methods of the Quanzhen School. Based on the content of the epigraphs on the steles, they are classified into religious and historical steles, calligraphy steles, practicing methods steles and other kinds of steles. Many of them are of great point in doing research on the ancient Mongolian language. In addition, steles like the calligraphy of Wu Daozi (a famous Chinese calligrapher), portrait of Wang Chongyang and the seven personages of the Quanzhen School are of high artistic value. Such large scale steles recording the development of the Quanzhen School have never been discovered in other places.

Footprint stone, placed in the left of the front of  Wang Chongyang’s tomb. The stone is about 2 meters high and 1 meter wide, with clear grain and strange shape, which is known as ” footprint stone of the founder”. Footprint Rock was so named due to a story of Wang Chongyang. It was said that a grain of sand happened to be affected by Wang’s spirit as Wang Chongyang cultivated his ideology. After that, the sand became harder and harder eventually becoming a rock. When Wang Chongyang realized that it is necessary to stop the sand, he kicked and hit the arrogant “rock” leaving his footprint and palm print.

The archaic-style gate, several big word “Chongyang alace” were inlaid  in the middle of a board. Lao-zi’s “Tao Te Ching” stele stands on the left side of the gate. The whole gate gives people a sense of simplicity, elegance and gravity.

Lingguan palace in the Tongzhi years of Qing dynasty. is to worship Taoist protector – Wang Llingguan. His statue with a red face, round eyes, and one eye on his forehead, whose fangs are twisted, and with a golden whip in one hand and a golden brick in the other. The position and function of Wang Lingguan in Taoism is very similar to Wei Tuo in Buddhism, they are all important guardian who guarding the Shanmen.

The Tomb of Wang Chongyang , within the original scope of  “Baiyun Temple” . The base is 1.5 meters high. The cemetery covers an area of 150 square meters before the cultural revolution.

If you want to get out of the traffic and hassle of navigation, you can book a private tour package that includes visiting, dining and transfer from us. Our local guide and driver will escort you to the Chongyang Palace in the fastest and most convenient way and take care of all the details. You just have to focus on the visiting.

It is an arch stone bridge built in the early yuan dynasty, 7.5 kilometers (4.7 miles) from the chongyang palace. The bridge, embossed with beautiful dragon heads, still looks elegant. It got its name from the stone statue of wang chongyang unearthed here in 1987. The statue vividly depicts Wang Chongyang sitting with a serious expression. Surrounded by his two assistants, he seemed to be thinking Taoist thoughts.

Located in the Chengdao Palace, it is a tomb dug and named by Wang Chongyang himself and he lived there for seven years. After seven years of life in the Living-Dead Tomb, Wang brought himself to light again. He decided to pursue his dream in a personal manner. Actually, the tomb we can see today has an underground room. It has been blocked out of concern for tourists’ safety.