Jade Dragon Snow Mountain is the holy mountain in the heart of Naxi’s people, which is a snow-capped mountain located in the southern part of China. The widespread legends and myths of the Naxi ethnic minority and the unclimbed Shanzidou deeply attract people’s attention who had already came here or who wants to come here. Moreover, you will have the chance to enjoy the Impression Lijang Ethnic Show which demonstrated the traditions and lifestyles of the Naxi, Yi and Bai peoples in this area if you join this amazing tour. 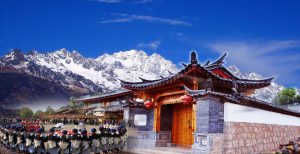 At 9:00 AM, private driver and tour guide will pick you up from your hotel and drive about 30 KM to Ganhaizi Meadow(3100 M), which is located at the east foot of the Jade Dragon Snow Mountain and is only 25 kilometers (15.5 miles) away from Lijang Baisha Old Town.

And then head to Baisha Old Town which is located in the foot of the Jade dragon Snow Mountain. It is one of the oldest zones in the city of Lijang and it is much quieter here, the local shops and restaurants are retained the original style since it has not be commercialized. In this tour, the Naxi people’s peaceful daily life and the ethnic customs are also shown. 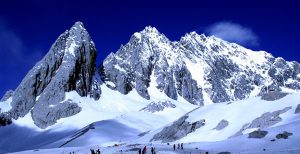 After lunch, head to the Jade Dragon Snow Mountain, which is located in the southernmost glacier of the Northern Hemisphere. It was consisted of 13 peaks which covered by snow all year round. The snow-covered mountain resembles a jade dragon lying in the clouds, hence the name.

Then move on to enjoy the Impression Lijang Ethnic Show here, which is designed by the famous film director Zhang Yimou. Performed in an open air theater at an altitude of over 3100 meters, it provides us a different experience.

After the whole day tour, at about 6:00 PM, you will be driven back to your hotel. Tour end!