Dazu Rock Carvings: the general term of “Dazu Grottoes” refers to all the cliffs and rocks carvings in Dazu County. Put under conservation and protection are 75 spots of cliff carvings and grottoes composed of more than 60000 statues and over 100000 Chinese characters of inscriptions and epigraphs. The work of Dazu grottoes and carvings began in 650 A.D of the Tang Dynasty (618-907 A.D), and had continued until Ming (1368-1644 A.D) and Qing (1644-1911 A.D) dynasties. The two major sites are North Hill (Beishan) and Baoding Hill (Baodingshan). In 1999, UNESCO listed Dazu Stone Carvings as a world cultural heritage site. 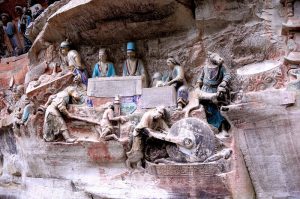 Our tour guide will pick you up from Chongqing Railway Station or your downtown hotel at around 08:30. We will then take a private car to Dazu County. On the way, our guide will brief you on the arrangements of the day’s Dazu Rock Carving tour. During the 2-hour journey, you can also watch the scenery along the way.

A famous world heritage site, the Dazu Rock Carvings refer to all the grotto sites in Dazu County, which cover several large scenic areas. Today, our guide will accompany you to tour the well-preserved Baodingshan Carvings. There are green buses taking you to Baodingshan directly. You will see that mountain cliffs are densely scattered with Buddhist and Taoist statues as well as celebrity figures from the late Tang Dynasty (618 – 907). You can wander at your own pace to have a close look at the precious grotto art. After the tour, a bumper lunch will be served at a fancy restaurant so that you can taste authentic Chongqing cuisines. After a short break, you will be transferred back to Chongqing city for a further exploration in Ci Qi Kou Ancient Village. As the other must-see of your Chongqing day tour, the village is a bustling and lively commercial area clustered with food vendors, artwork shops and tea houses.