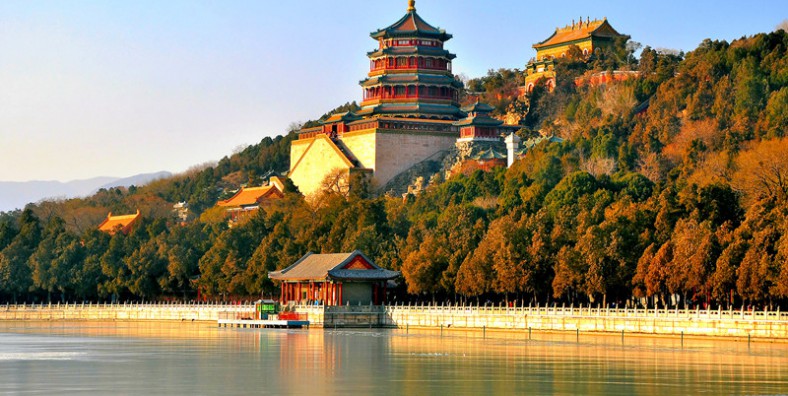 Why is Summer Palace so Special?

The Summer Palace is located in Haidian District, northwest of Beijing, 15 kilometers (9 miles) from the downtown area. As the largest and best preserved royal park in China, it has greatly influenced China’s gardening and landscape with its famous natural landscape and cultural interest, and has long been recognized as the “royal garden museum”.

In the 15th year of Ganlong (1750), in order to prepare for the 60th birthday of Empress Xiao Shengxian, Ganlong Emperor ordered the excavation of the West Lake under the pretext of harnessing the water system in the west of Beijing. He also ordered the excavation of a high-water lake and a water-raising lake in the west of the West Lake. These three lakes were used as water storage reservoirs to ensure water for palace gardens and irrigation for the surrounding farmland. Emperor Ganlong changed the name of West Lake to Kunming Lake based on the story of Emperor Wu of the Han Dynasty digging up the Kunming pool to train water troops.

In its heyday, the Summer Palace was large-scale and covered an area of 2.97 square kilometers (293 hectares). It was mainly composed of Wanshou Mountain and Kunming Lake, of which the water surface accounted for three quarters (about 220 hectares).

On December 25 of the 3rd year of Xuantong reign (1911), Pu Yi abdicated. As Pu Yi’s private property, the Summer Palace was still managed by the Qing Dynasty’s internal affairs office.

Due to the shortage of royal funds year by year and the depletion of financial resources for the Qing Dynasty, on January 14, 1914, in order to subsidize the garden finance, the Qing Dynasty’s internal affairs office changed the Summer Palace into a ticketing tour. In April, the Ministry of Foreign Affairs, the Ministry of Internal Affairs, the Ministry of Military Affairs and the Office of Internal Affairs of the Qing Dynasty agreed that “during the open tour, there will be a fund-raising intention” and proposed the “Regulations for the Trial Sale of Tickets in the Summer Palace and Other Places”. It is stipulated that tickets will be officially sold to the public from May 6.

The Summer Palace covers an area of 293 hectares and is mainly composed of Wanshou Mountain and Kunming Lake. There are more than 3,000 palace garden buildings in various forms, which can be roughly divided into three parts: administration, life and sightseeing.

The sea of wisdom at the top of Longevity Hill descends to form a well-defined central axis. At the foot of the mountain is a “corridor” with a length of more than 700 meters. There are more than 8,000 colorful paintings on the beam of the corridor, which is called “the world’s first corridor”.
The back of Wanshou Mountain and the back lake are covered with ancient trees. There are Tibetan temples and Suzhou River ancient trading street. Small and exquisite, it is called “the garden of the garden”.

The Summer Palace can be divided into four parts: the Court Area, Front and Rear Area of Longevity Hill, and Kunming Lake Area.

It is located in the northeast of the Summer Palace, which is an alternative place for Empress Dowager Cixi and Emperor Guangxu to meet officials and handle state affairs. It consists of court affairs and life. In addition, the area is a comprehensive transportation hub and is also the first stop for tourists to enjoy the beautiful scenery of Kunming Lake and Wanshou Mountain.

The area covers a larger part and opens up the prospect of Kunming Lake. The east causeway of the lake is connected to the west causeway by a long corridor dotted with pavilions, bridges and docks. As the breeze gently blows and the waves flicker, willow trees kiss the ripples on the vast water surface, and no pleasant scenery on it can make the bright spots disappear.

Compared with the Qianshan District of the Summer Palace, it is very quiet here. After the war, most of the buildings could not be repaired, leaving only a few ruins. Although there are few buildings here, it has a unique landscape with dense green trees and winding paths. Walking here, tourists can feel rare peace and elegance.

3 thoughts on “Summer Palace in Beijing”